Hedwige Jacobs: “We’re all alone, but we’re all together.” 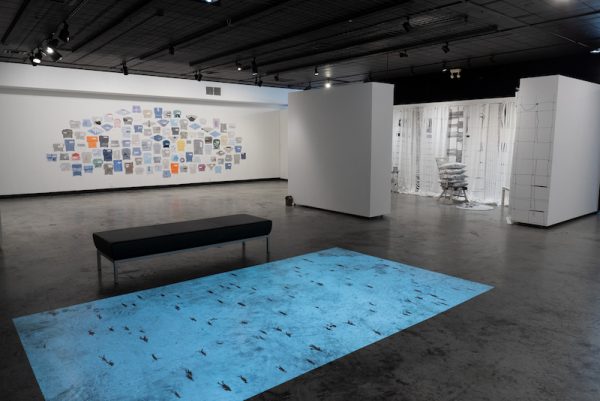 “I’m very direct,” Hedwige Jacobs says at the opening for her show, If I could, I would cover everything with my drawings, at Women & Their Work in Austin. The show’s title is so direct that at first blush it appears artless. But if you see the show, there’s also something endearing about Jacobs’ literal execution of the premise. The earnestness feels bold.

The artist’s impulse to “cover everything” manifests in many ways here. The gallery is divided into sections featuring a variety of Jacobs’ work, and as the viewer moves through them the relationship between the work and the viewer shifts. The line between looking at a drawing and being drawn into a space blurs. 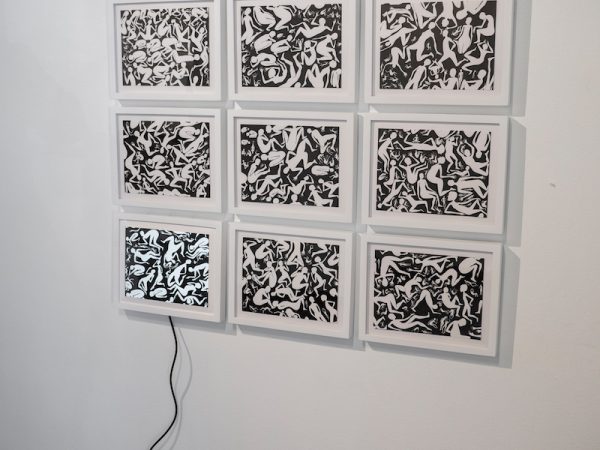 Fittingly, the first work you encounter in the gallery reads like an introduction to the show. It’s a grid of eleven pen-and-ink drawings infiltrated by one animation, camouflaged among them. Jacobs’ simple black-and-white palette and recurring interwoven human figures are introduced here, so interconnected that they blend into an abstraction. 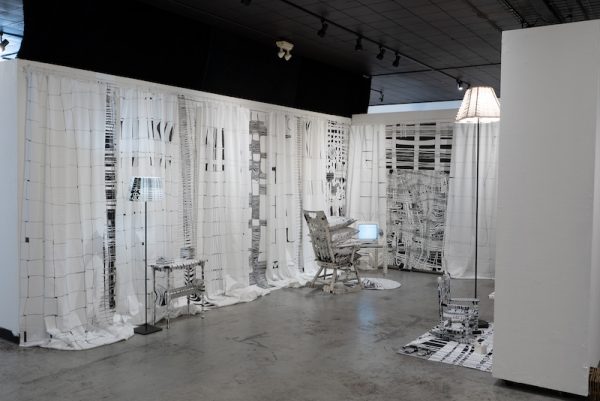 Around the corner, Jacobs has created an intimate setting with a rocking chair, a television set, slippers, lamps, and tchotchkes. The ‘room’ feels almost impromptu and reflects the title of the show, as everything is literally covered in Jacobs’ drawings. The fabric wallpapering the room, the furniture, and even the light blubs in the lamps are meticulously illustrated with a loose weave. “It’s like a path,” Jacobs says of her penchant for the woven pattern. The objects that the path crisscrosses are all second-hand, found or purchased at thrift stores. This is an ecological decision, as well as an aesthetic one, and perhaps even an emotional one. Jacobs describes the objects as “ingredients for a homey feeling” — part of the intimacy conveyed by the objects comes from the fact that they’ve belonged to someone. The room creates the sensation of being absorbed or implicated in the art, as if the art is watching you. 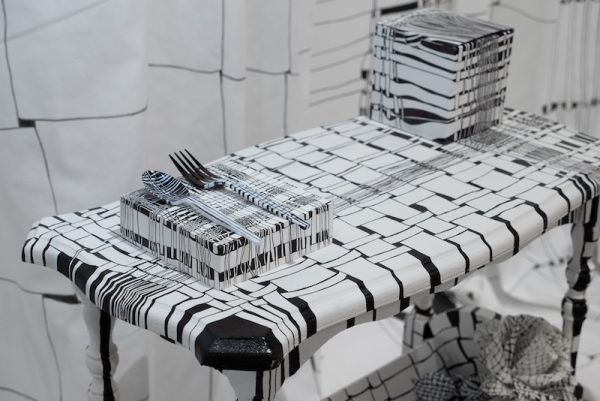 Jacobs describes her artistic practice as feeling “like an obsession.” When asked if she executes this impulse on the walls of her own home, Jacobs gives a firm, “No.” And then, “Well… I do have corners with work,” and later mentions, “If I have ten minutes at home, I want to be working.” 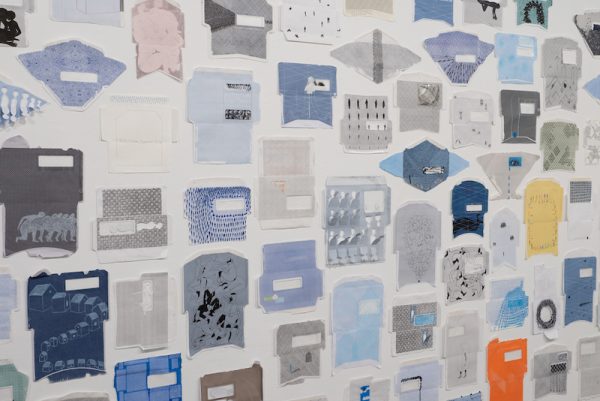 Her drive to make work at any opportunity is evident in the show. On one wall approximately 100 used and unfolded envelopes showcase her drawings, some meticulously detailed, while others show a practiced restraint. Again and again, tiny human figures populate these images, sometimes crowded together and at other times totally alone.

On one envelope, a lone figure looks out from the address window. Though incredibly simple, the image’s loneliness is almost overwhelming. The effect of using the windows of envelopes furthers the ambiguity of who is watching and who is being watched — who witnesses whose loneliness? 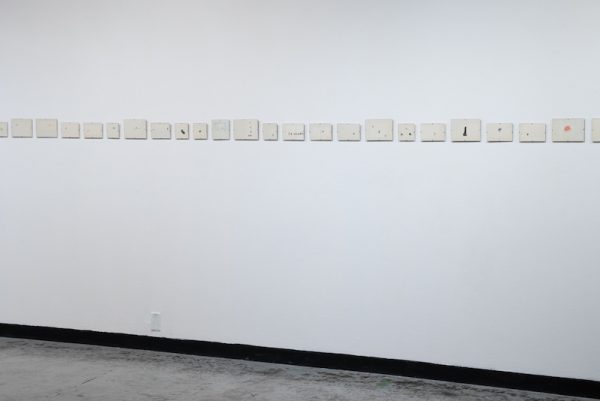 Across the room a single row of framed drawings, roughly postcard-sized, winds across two walls. The figures in these images cluster together in mobs, they walk in twos or threes, or sit in solitude. Jacobs says “…from a distance it’s like a pattern, more organic. People have to move in to discover [the figures] and connect.” 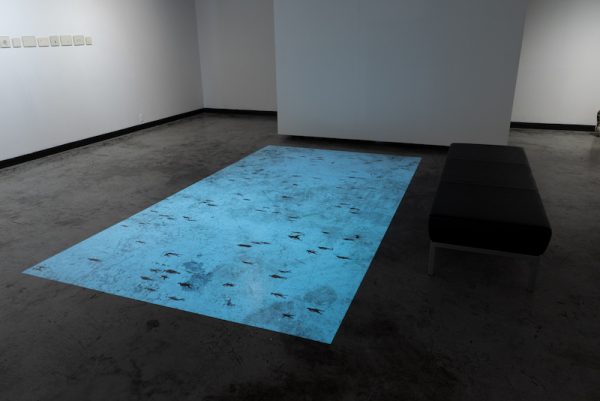 This idea is most potent in the interactive animated drawings projected on the floor of the gallery. As you physically enter the image, you become a member of this small, sporadic community. Each figure in the animation shows some individual personality. One pushes a stroller, others move in groups or alone. “Just like I’m not interested in a perfect weave,” Jacobs says, “I’m not interested in a perfect walk.” What she is interested in is the way the characters, like people, respond to one another, how they exist in the world. She seems both overwhelmed and inspired by the vastness of humanity and says, “People are walking around and you don’t know them, but they have whole stories.”

As you walk into the projection, the figures scurry away like ants avoiding being crushed. You’re granted a wide birth, and yet you’re surrounded by all of these busy people, running about in their world. “It’s about isolation,” Jacobs says. “We’re all alone, but we’re all together.”