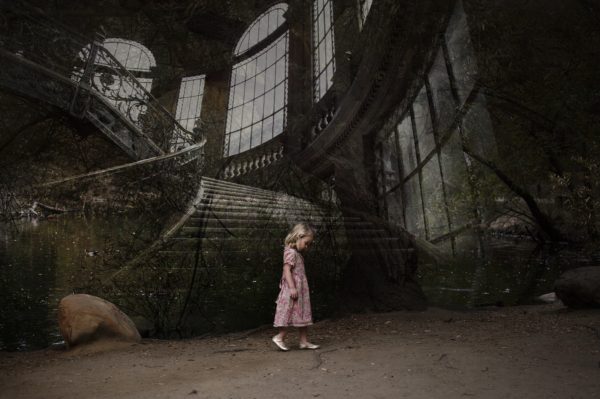 On one wall of Mickey Hoogendijk’s show at Women & their Work in Austin, there’s a quote from the film Willy Wonka and the Chocolate Factory in large type and elegant font: “There is no Life I know to compare with pure imagination.” This is a bold and fairly corny gesture for viewers upon arrival. It almost reminds one of the “opening” of Mr. Brainwash’s works in the scabrously hilarious “documentary” Exit Through The Gift Shop. My negative reaction may be due to not finding Willy Wonka a beguiling piece of whimsy, but rather a grotesque parable of gluttony and also maybe a thinly veiled metaphor for a race war? Regardless, the actual pieces in the show demonstrate that this quote is merely a launching point for Hoogendijk. It is interesting when artists find some thread in a work of pop culture and yank it out and sew it into the center point of their own mandelas. I remember a show at a gallery some 15 years ago, where an artist had taken the still of Sigourney Weaver sweating in her underwear at the end of Alien; it was surrounded by tropical plants, as if that moment of sci-fi terror was actually a humid ideal of liberation. 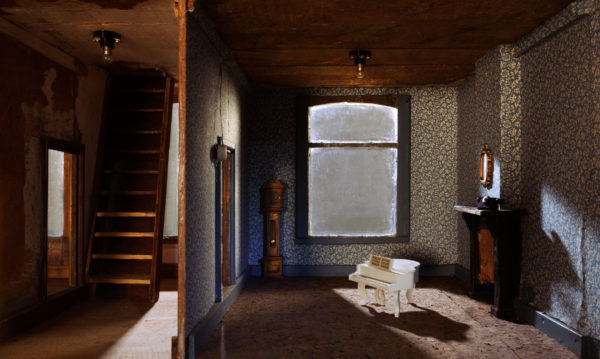 The centerpiece of this show is a dollhouse given as a gift by a Jewish family to Hoogendijk’s family as a memento of gratitude for protection from the Nazis during World War II. The totemic importance and symmetry of such item, like the conceit of a perfectly wrought Saul Bellow story, is the glowing furnace for the exhibit. Hoogendijk has the actual dollhouse, a short film about the history of the house lensed in gauzy, rich hues, and several incandescent photographs of the interiors of the dollhouse looking out. Hoogendijk uses an advanced process of printing her photographs onto metal. The ink is heated to extremely high temperatures until it is transformed into a gas and expelled onto the metal plates. The results are ghostly and highly detailed, iridescent and aesthetically confounding. The flickering doll house series strongly recalls Andrei Tarkovsky’s masterpiece The Mirror, a film about the hypnotic loops of memory. In the words of the film’s protagonist, a poet: “As if I were a thread pulled by the swift needle of life.” The metal plates have an unsettling shifting quality, appearing from afar almost as holograms, and up close as shimmering, unending pools. There’s an uncanny valley to this method of printing. I can’t decide if I “like” the pieces as they shift from a sort of gothic steam-punk vibe to something more elusive and drifting. 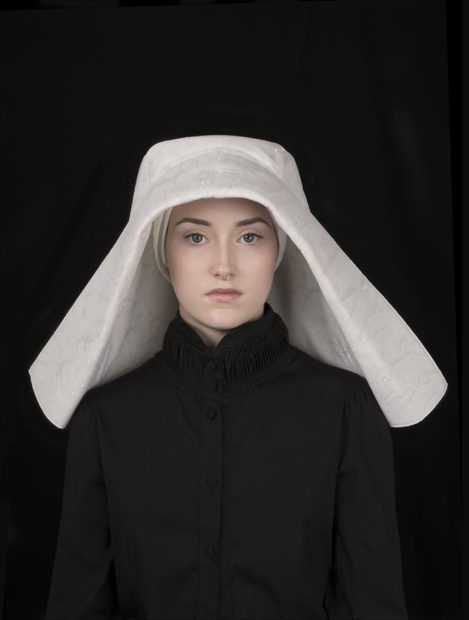 The rest of the show consists of several opulent portraits of models in Austin. Hoogendijk obviously takes inspiration from the Dutch masters, and the portraits have a solemn serenity elevating them above their fashion-magazine lacquer. Taken together, in random sequence, the pieces form surreal narratives, interlacing the past with dreams. Hoogendijk’s vision of “pure imagination” is elegiac, shrouded by the past — a dream frozen in the moment right before one realizes they are experiencing déjà vu.

Through Sept. 7 at Women & Their Work, Austin.

Hedwige Jacobs: “We’re all alone, but we’re all...