Houston, We Have a Problem: Clingy Murals 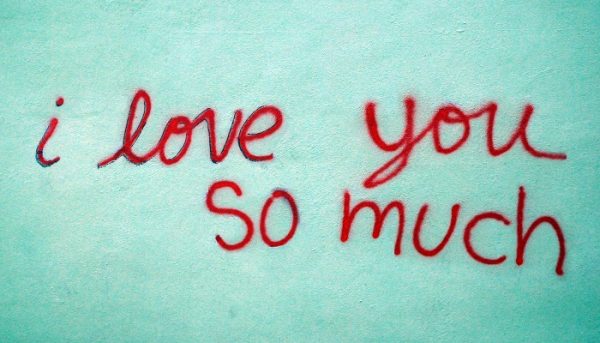 In 2010, musician Amy Cook wrote on a public wall to her girlfriend” “i love you so much.” It was on the side of Jo’s Coffee Shop in Austin, and it has since become one of Austin’s major tourist attractions.

I believe in the authenticity of this mural, which is really more or less a kind of graffiti tag. Its simplicity reads as a genuine romantic gesture. It’s also a manifestation of Austin’s capability to solidify these kinds of eccentric moments as uniquely “Austin,” rather than manufacturing them inorganically, for the sake of attention.

Unfortunately, Houston caught wind of the “i love you” mural and has proceeded to vomit a degenerate spawn version of it all over the city in the form of half-baked visual representations of “love.”

Before I continue, I feel I should preemptively defend myself: I am not some Eeyore-esque pessimist towards love or romance, nor do I have commitment issues. But I can’t help but feel the itch of claustrophobia at the seeming 8,764 murals across town who have no idea who I am, yet claim to love me. Let’s take a look at what differentiates Cook’s sincere scrawl from these contrived Houston murals. 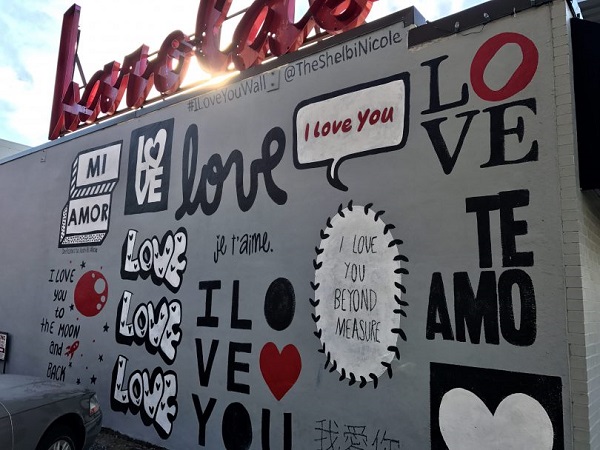 It ultimately comes down to ulterior motive. Cook’s tag was a deeply personal, yet reads as a universally relatable act. It’s rooted in spontaneity and vulnerability. Houston’s amorous infestation, on the other hand — like some desperate first date — is practically (and in some cases literally) begging for our attention and approval, and attendant publicity. This is painfully obvious with the various murals that have gone so far as to attach a hashtag right onto the artwork, so as to dictate to the viewer what he should stick on his Instagram feed and how to label it. Asserting that much control over the narrative of and how the viewer interprets and engages with the work is not only lame, it’s borderline unethical within the definitions of ‘art.’

One could argue that while any image may be imperfectly mediated through an Instagram feed, if the mural is being disseminated and the public is interacting with it, isn’t the mural fundamentally doing its “job?” My problem with these works is not necessarily their ubiquity on social media — although I think the encouragement of the secondhand viewing of an artwork via social media rather than firsthand experience is problematic — rather, it’s that their primary function and motivation is to be made popular on Instagram in the first place. There’s nothing thoughtful or intelligent or even remotely interesting about that. So maybe a more pressing question for Houston about these contrived love murals should be: Why does a world-class art city (not to mention the most diverse city in America) put up with such shitty and saccharine public art? 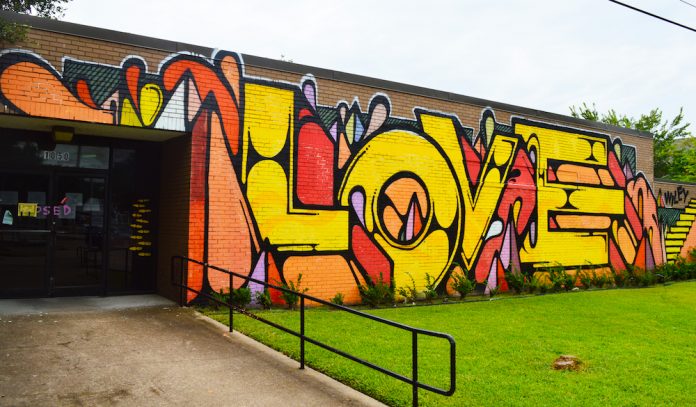 I think back to Tommy Gregory’s recent work as Public Art Curator for the Houston Airport System (HAS). I remember walking through a Houston terminal and seeing the work of Hillerbrand + Magsamen and a JooYoung Choi, among others, and feeling elated. I remember thinking: This is so thoughtful, and its placement is so interesting in the airport, and so much better than every Sedate Gigantic Light-up Monstrosity I see at other airports. In short, Gregory doesn’t treat the greater traveling public like they’re stupid or shallow.

Call me overly optimistic, or naive, but I believe that the average viewer will appreciate and engage with thoughtful public work if the city delivers it. It’s time for someone besides Lawndale to infuse our walls and public spaces with intelligence and excitement. That doesn’t mean lazy curation like covering every damn electrical box with “whatever.” It means really looking and asking the vast well of artists in this sprawl of a city, as well as the custodians of public space, to rethink how our murals can and should function. Maybe it means asking artists who are not normally muralists to dream up new ideas and solutions. But I do know that it’s up to all of us to demand change and standards for Houston’s burgeoning mural landscape.

Right now it threatens to overflow with insipid, didactic desperation. We all deserve something better and more reflective of the city itself, something dislocated — something surprising and nuanced.

I think you are vastly overestimating the acuity of people who encounter art in the wild. When I am out and about with my brother, who knows nothing about art, I’ll point out some piece of public-facing art and he’ll comment that if I hadn’t pointed it out, he never would have noticed the work at all. Watch people in the airport? Do they stop even for a second to look at the art? A few do, but not many. Terrible “love” murals are successful because people can pose in front of them for photos.

What is the definition of success of an art peice when it is placed on public ? Are we as society determined success by selfies or likes on social media? My influence as a “writer” or someone that writes on walls were muralist like John T.Biggers he an example of what we can call a muralist ,I like to paint murals in which I take the muralist approach with a personal and profound message but sometimes I get out and write on walls or even on trains, I recently had a meeting with a city contractor about Houston becoming a mural city but sadly they are not well educated on what is a mural,what is graffiti or what is a writing on a wall ,there is an area of town called graffiti park and there is no graffiti all the work there is created with authorization. I run a space called HAM Harrisburg art museum on 4300 Harrisburg Blvd. We have created a space that focuses on the educational value for a community on having an artist run space to cultivate freedom of expression on public.

First it was picking on the utility box murals, now messages of love in a time period where all we do is complain about being so divided? Don’t you have something better to whine about? Houston boasts some of the best public art. Take a stroll into The Heights. There, you’ll find all kinds of public art and phenomenal murals. Instead of pitting love statements against one another. Any statement about love is privledge in 2019, when transgender folks are getting kicked out of the military, Jews and LBGTQ people may not be able to adopt after the next Supreme Court ruling, kids are shooting up schools across the US in record numbers, and Russia is developing nuclear weapons again.

You’re terribly misunderstanding things. The writer has a very observant argument as to the lack of originality of these soulless knock off “murals”. Just because a handful of people like tacky, gimmicky public art doesn’t mean the walls should get any praise or public funding. Also, criticism is barely a thing in Texas, might as well embrace it when you see it…it wouldn’t hurt to hold public funds to higher standards and not just when it comes to being spend on visual culture.

To pick on your one of your last statements made about the electrical box murals: “That doesn’t mean lazy curation like covering every damn electrical box with “whatever.” It means really looking and asking the vast well of artists in this sprawl of a city, as well as the custodians of public space, to rethink how our murals can and should function.”

I believe that is an extremely frivolous and quite offensive statement to make. I, as an individual with my own aesthetic and design taste, agree with you that not all of the murals (mini or otherwise) fit in with what i like to see in the public realm…but I do not find them completely useless or lazy. Programs like the Mini Murals allow an opportunity for community engagement in the design process. In may cases, artists who are commissioned and paid for their services, attend community meetings where the residents of that neighborhood are given an open forum to directly describe what they value and what they want to see in a mini mural. By calling it “lazy” you are negating not only the invaluable service that is put into the program by all the people who care about this work but also disregarding a key aspect of this program: the fact that it is an open platform for neighborhood residents to have a direct say in how they want their community to be represented and to grow.

I did not say the murals were useless and lazy. I said the curation of the murals was lazy, which it absolutely was.

Part of the curation process includes community input on both location and artist selection. by calling that flat out lazy you are, once again, saying that the entire community engagement process (giving local residents agency over their own neighborhood’s design and aesthetic) is lazy.

She might be being nice, because I’d call the process and current leaders mediocre. They have little knowledge and are so afraid to take a risk; hence the safe, illusions of art that are really just weakly composed branding/selfie walls.

Are the murals referenced in this article as “saccharine” publicly funded? I always believed these were commissioned by private parties ?