Zoo Art: The Largest Rhino Sculpture in the World! 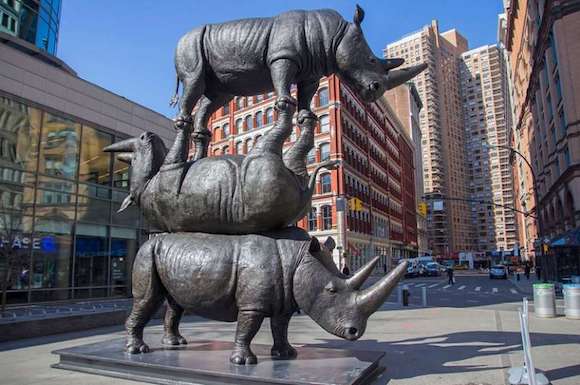 The Last Three by Gillie and Marc

Early next year, the largest rhino sculpture in the world, The Last Three, will make its way to the San Antonio Zoo, according to the zoo’s press release. The 17-foot tall bronze sculpture, currently installed in Brooklyn’s Metro Tech Commons in New York City, will arrive at San Antonio Zoo at the same time that the zoo will celebrate the opening of its new and improved rhino habitat in early Spring 2019.

Currently installed in New York City by contemporary artists Gillie and Marc, the “planet’s tallest rhino sculpture” was unveiled a mere 4-days before the shocking death of Sudan, the last male Northern white rhino, leaving only two females of the species left on the planet. The sculpture became a powerful memorial, to which residents and tourists flocked, leaving flowers at its base and petitioning for change. “We want The Last Three to celebrate all of the amazing people and organizations that drive positive change in wildlife conservation,” says Gillie, “However, our goal is also to continue the efforts of San Antonio Zoo, and inspire generations to join the battle for rhino conservation.”

Of course, the press release calls it as the largest rhino sculpture in the world, but how does it measure up to Bob Fowler’s elephant at the Houston Zoo, referred to as “life-sized”? (Ariane Roesch wrote about Fowler in a Glasstire article last year called “Keep It Simple, Stupid: ‘Passing the Torch’ by Bob Fowler.”)

Waco, though, may beat them all. It is in the midst of creating an entire sculpture zoo called at the Cameron Park Zoo called the Riverside Sculpture Project as part of its Creative Waco program.

Waco: Pick a Card, Any Card

Bob Wade’s 40’ long iguana sits on top of the Ft Worth zoo!