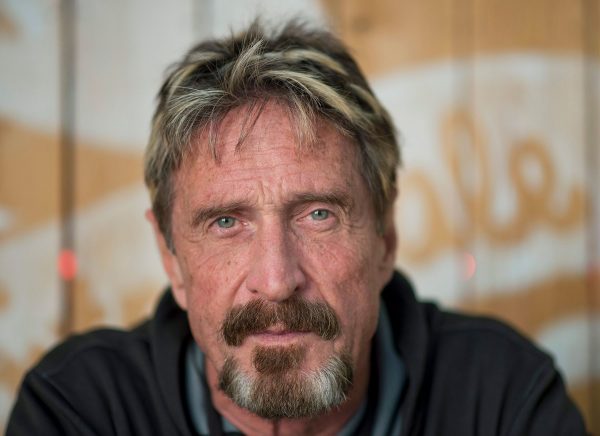 John McAfee, the mind behind the software company McAfee Associates and its love-to-hate antivirus software, recently announced on Twitter that he is launching a new crypto artist residency program. Over the past few years, especially during the time he served as the CEO of technology holding company MGT Capital Investments, McAfee’s interest and involvement in the crypto currency world has grown. While at MGT, he led the company to begin mining bitcoin, but after about a year and a half he left the organization, saying: “I am looking forward to toiling in obscurity as the world’s foremost authority of all things cyber and crypto!”

In his Twitter post, McAfee said that his new crypto artist residency will be a one-month, travel and expenses-paid program in Team McAfee’s Beach Cottage. While it is open to artists who work in all mediums — “painting, sculpture, videos, mixed words/visuals, music, dance, improv, plays, poetry,” and more, the caveat is that all art created during the residency will be owned by the McAfee Foundation. As a sort of compensation, McAfee’s tweet said that artists “will be promoted.” We assume — based on McAfee’s recent fascination with crypto currency coupled with his naming of this residency the McAfee Crypto Art Program — that the program’s goal is to promote art about the politics, practicalities, and other ideas around various crypto currencies. Or as McAfee puts it, “revealing the Crypto Space through art.”

MCAFEE CRYPTO ART PROGRAM
.
Accepting applications from all arists
.
A one month residency in Team McAfee's Beach Cottage. Travel and all expenses paid.

All art created while in residence will belong to the McAfee Foundation. Artist will be promoted.
.
Email:
[email protected] pic.twitter.com/9MRhTkPQGc

In another interesting statement, in a reply to a Twitter user saying that the artists McAfee brings to his residency deserve to get paid, McAfee responded with the following:

“You are wrong, my friend. History proves that the reverse is true in all of the arts. Art created for free is, universally, superior to paid commissions. The statue of David, every painting of Van Gogh, the entire body of work from heironimous Bosch, M.C. Escher et. al. All free.”

McAfee himself is known for his over-the-top persona on Twitter and in real life. He has a complicated personal history, which includes him fleeing Belizean authorities, allegedly attempting to trick tech reporters, and a 2016 run for President of the U.S.

Art Dirt: Why Artists Need to Learn About...

City of Houston Wants Artists for its New...