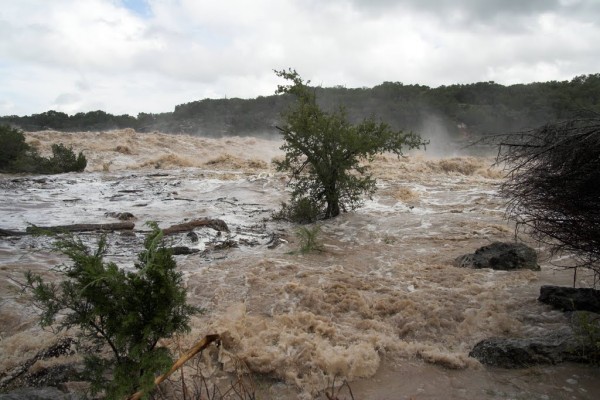 Last weekend, due to a big storm that flooded parts of the state, I was forcibly cut off from the Internet and phone service, as well as travel by car. This total cut-off lasted about 36 hours. Considering I was staying in a cabin on a river in the woods, miles from the nearest small town—and I’d brought a stack of books—you’d think I would have been down for the adventures in analog. I was not.

This technology revolution has me over a barrel, and five days later I’m still unsettled by how unsettled I was by being unwillingly suspended. Our lives and livelihoods are tethered so tightly to digital communication that it’s nearly impossible to remember what life (or making a living) was like even ten years ago. And it’s clearer by the day how much our economy both feeds and feeds on the beast. Technology is a liberation and a tail-chasing trap. Fittingly, it’s become its own Hotel California: you can check out anytime you like, but…

The cabin, which I’d stayed in before, normally has Internet service, but it’s slow and only good for emailing and editing and basic maintenance of Glasstire. No video streaming, no big uploads. That’s fine. I’d prepped work in advance. And my mild but very real web addiction is pretty easily broken by a few days around a weak connection. Cell phone service there, even on a sunny day, is pretty crap. Sending and receiving texts is spotty. Nonetheless, I had counted on being online a few times a day to get some work done. It was late October. Art stuff is happening all over Texas.

The storm hit overnight (best Texasism: “like a cow pissing on a flat rock”—it really was a spectacular deluge) and the next day I woke to a neighbor warning me not to drive anywhere; roads were flooded. Evacuations had been going on. The cabin is on a high point, so I could stay put. My first chagrined reaction to realizing the whole digital world was blacked out (and no going into town to find connection), was to think, Well, that’s why I’m here: to take a break.

Isolation is not a problem for me. Quiet isn’t a problem. But instead of appreciating the ferocious might and beauty of Mother Nature and the reminder that we’re all peons in the grand scheme of the universe (I generally find this notion immensely comforting), I was infected by racing thoughts about not getting work done. It was physically sickening.

The neighbors, a couple who live up the road from the cabin, are also the cabin’s owners. Late the next morning when the rain let up a bit, I walked to their place and spoke to them over the sound of a raging river to tell them my Internet was out and phone wasn’t working (theirs was down, too) and they actually looked at me with pity. As in: you’ve come to this place in the raw countryside and you can’t live one day offline? For them (and he’s a tech guy), nature is undeniable. Their part of the world is wild, and while they understand their role as stewards of the land they live on, they exist within the rhythm of nature. Man never wins the battle; surrender to the fact that nature doesn’t care about us. So they pity me and my keening dependency on a modem and cell tower, and I envy them their groundedness in a much larger truth.

Our weather systems are not going to improve in the coming years. And as far as humanity goes, global stability isn’t improving. Our growing dependency on technology shows no signs of relenting. Yet no amount of technology can prepare us for what the world has in store for us, cataclysms both natural or man-made. This new foundation of existence is a worthless hedge against much larger forces. Ten inches of rain dumped in one night in the center of Texas broke my decidedly tiny world for 36 hours. There is nothing okay or healthy or appropriate about that, and I can’t help but turn this small story into a much deeper dread about how easy it is nowadays for our tech-driven lives to hit an unexpected wall and just… stop.

Art Dirt: Why Artists Need to Learn About...

You are spot on.
I read Station Eleven (Emily St. John Mandel) and the scenario hasn’t been far from my mind when thinking of our society’s dependence issues.
http://www.nytimes.com/2014/09/14/books/review/station-eleven-by-emily-st-john-mandel.html?_r=0

This book definitely makes you think.