TEMPO Returns to Austin with More Than Double the Art 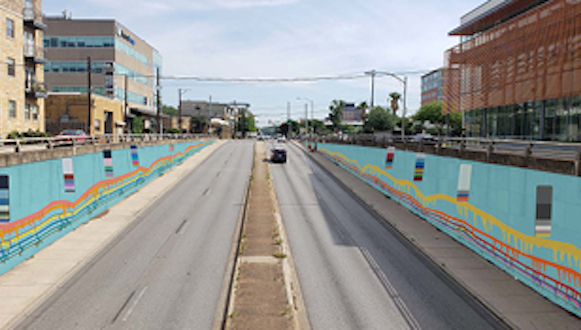 TEMPO, the annual program that commissions artists to create semi-temporary installations in a range of media that explore themes suitable for the outdoor environment, has announced artists selected for it 2018 cycle. As the City has done in previous cycles, ten artists were selected to create installations for each of the City’s council districts. (For project descriptions, go here.) A collective exhibition of all the works, TEMPO Convergence, will be hosted at Edward Rendon Sr. Park as part of the East Austin Studio Tour, November 10-18.

This year, TEMPO has expanded to include murals. Through the TEMPO 2D program, twelve local artists were selected to create hand-painted murals, vinyl adhesive artwork, or wall-based fiber art at locations across Austin including public parks, the Austin Bergstrom International Airport, and other high-profile locales. Another expansion of the TEMPO program this year is TEMPO Refresh, an initiative through which an artist is invited to re-imagine an existing work in the Art in Public Places (AIPP) collection. For the inaugural year of this pilot program, artist Laurie Frick will create an installation on top of and around artist Carl Trominski’s Moments–an artwork comprised of “blue signs” sited on the Lamar Bridge Underpass. The work was chosen to mark and celebrate its 15th anniversary and because it is one of the most discussed artworks in the City’s collection. Trominski has been supportive of the concept from the beginning, and generously stated, “I am totally open to a temporary artwork intervention for Moments. This project was a great opportunity for me at the time and I’m happy that it can continue to provide opportunity to others today.”

So this year, a total of 23 public artworks will be exhibited: ten sculptures through the TEMPO program, twelve murals through the newly-established TEMPO 2D, and a reimagining of Moments. Congratulations to the following artists: