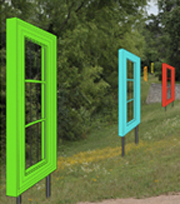 The first four projects of Austin’s new TEMPO (temporary public art) program will be installed in the next few weeks. The TEMPO project launched in spring of 2013 with an open call to Austin-area artists to submit proposals for temporary artwork on City parkland. The City parks eligible for TEMPO sites are all located outside the downtown area, so that the project can reach into neighborhoods that may not currently have public art. Eleven proposals by eight individual artists and two artist teams were selected and will be installed for varying durations beginning in fall 2013 and continuing through summer 2014.

The TEMPO Kick-off Celebration will take place November 16 at noon at Plaza Saltillo, the site of one of the works. Three of the TEMPO installations are part of the East Austin Studio Tour (EAST), a free, self-guided tour of studios, galleries, and installations east of I-35. EAST, which is produced by visual arts nonprofit Big Medium, also begins on the 16th and continues the following weekend.

The four installations to be celebrated at the kick-off party are Festoon by Jessica Braun, Window Walk by John Mark Luke, Space Camp by Mason Leland Moore and Joel Nolan, and Below by Jacob Villanueva and Jeff Clarke.