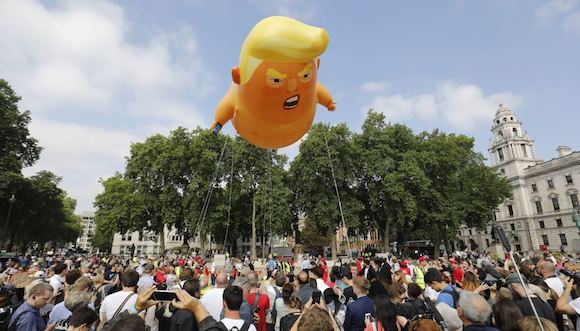 Who says that political art can’t cause much of a stir, besides “preaching to the choir”? The 20-foot inflatable blimp of President Trump as a giant, irritated baby that flew over London is apparently part of the reason the President did not stay in London proper during last week’s visit. The balloon is now being fought over by museums and protesters alike.

Baby Trump was created after a crowdfunding campaign on crowdfunder.co.uk raised the £16,000 cost of its creation and deployment. It depicts Trump as “an angry orange baby” with a snarling mouth and tiny hands, wearing a diaper, and holding a cell phone. Matt Bonner, who works as a graphic designer for activist groups and designed the inflatable (created by Imagine Inflatables) says that depicting Trump in this way was an attempt to get under the president’s skin, reports dezeen.com. “I think that there is a strong link between art and politics. It’s a very powerful tool,” Bonner continues. “It’s perhaps one that we don’t use enough, so hopefully this can inspire others to take similar action.”

artnet News reports that museums are in negotiations over the balloon:

The director of the Museum of London has also expressed a desire to add the balloon to the museum’s collection. Getting wind of competing interest from the British Museum, the director tweeted that there is “an interesting conversation to be had… about reasons for collection and display.” Although there has been some talk of the balloon symbolizing a turn to “clickbait collecting,” the director maintained that Baby Trump “would be great in our national collection.”

But there are other museums interested in the balloon. Besides the British Museum, London’s Design Museum, the Science Museum, and the Bishopsgate Institute in East London have expressed interest.

There is another crowdfunding effort to bring the baby along a tour to follow President Trump. Thousands have been raised to bring the viral sensation to New Jersey, reports USA Today. One New Jersey woman started her own GoFundMe page Thursday that stated her intention to pop the Trump baby balloon, and asked for donations towards her bail should she be arrested in the process. “I’m tired of people disrespecting our President! I plan on taking out this ridiculous balloon,” her page stated.

Below is a short video of the designer’s motives and description of the work.

I was in London in the days leading up to the protest and followed the British news coverage. I wanted to see the blimp in person and would have gone to the protest if I didn’t have to catch a flight that day. A few thoughts—it is telling that the Mayor of London approved the blimp’s flight over London. 250,000 people showed up for the protest vs the “thousands” that were reported as protesting in NYC post election. As for whether the blimp should be acquired by a museum—it is an object that is important as cultural currency in this moment in history