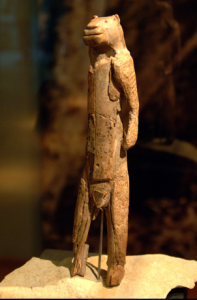 The Löwenmensch, or “Lion Man” of Ulm (it might be a woman, but it was named during the “golden age of archeology”), a 30cm figurine carved from a mammoth tusk, is undergoing high-tech restoration. Further sifting of the ancient sands in the Alpine cave where it was discovered in 1939 have uncovered thousands of additional fragments which are now being re-incorporated into the piece. Some fragments have been re-dated to 40,000 years ago, making it the world’s oldest known example of figurative art, and it’s not just a lion, or just a (wo)man!  As British Museum curator Jill Cook, no psychologist, said, it is “not necessary to have a brain with a complex pre-frontal cortex to form the mental image of a human or a lion‚ but it is to make the figure of a lion-man.” Contemporary realists, take note!

I’ll be seeing that show late next month.