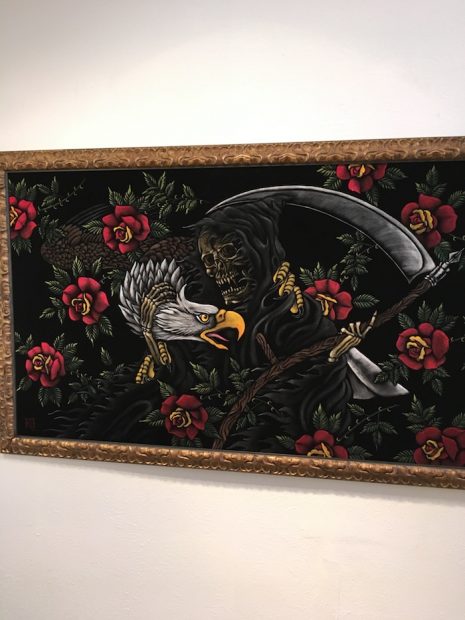 Is it possible to mount a show dominated by velvet paintings and not have it descend into a kitschy, ironic commentary on high art/low art? Riley Padgett just did. The tattoo-artist-turned-artist artist’s paintings live somewhere between an homage to the velvet black-lit thrift store forms that he channels and the great ink traditions of his parlor craft. Padgett’s velvet canvases in Gallery 414’s Well Dressed Secrets in Fort Worth all but steal the show (and eyeballs) from the other two artists in Secrets. 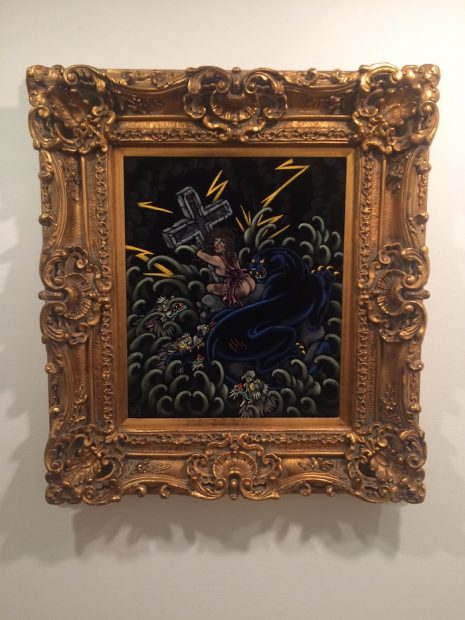 Riley Padgett, Peripeteia at the Rising Tide of Bitches

This larceny doesn’t happen because of the novelty of velvet. Rather, the artist leans into his subjects with the same intensity and honesty that earned him recognition by the Dallas Observer as one of the city’s best tattoo artists back in 2015. In Under The Double Eagle, a serpent is writhing in the clutches of two bald eagles whose talons have dug in for the kill. Intense yellow eyes split their gaze between the prey and the viewer. The serpent’s forked tongue and fangs hiss in terror and the struggle for life bleeds out before our eyes. Peripeteia at the Rising Tide of the Bitches shows a naked woman clinging to a cross, as a midnight-black panther leads a pack of snarling hounds of hell in for the kill. This is the stuff of Milton and Homer, and in his allusion to allegory, Padgett’s work garners a different sensibility than the paint-by-numbers scenes that typify the genre.

The point isn’t that Padgett has managed to somehow convince the collective “Them” of the art world to reconsider velvet paintings for a legit spot on the walls of hallowed white cubes. Instead, the most interesting point is that he made these paintings at all. The ballsy move of making animal paintings on velvet in 2018 is as radical as any version of painters being unconventional and pushing the medium in other ways. Our cultured horde may, theoretically, walk into Gallery 414, do a quick turn, and either relegate Padgett’s work to a pejorative sub-group version of folk art, or to an unserious attempt at trendy irony. But this work is poking a hornet’s nest. The compositions are rich and full of movement, and the contrast of the surface’s dense darkness with the vividly colored monsters and spirit animals creates a strong gravity that ensnares viewers and almost erases everything else around Padgett’s paintings. Sure: It’s dragons, and eagles, and velvet. But these works may haunt your dreams and make you wonder why Padgett is one of the few doing this kind of highly charged narrative work right now.

Despite being overshadowed by the light-absorbing voids of Padgett’s paintings, Heather Boaz and Ollie Gee’s paintings and photographs achieve enough escape velocity to break away from the event horizon of Padgett’s velvet black holes to balance the show. 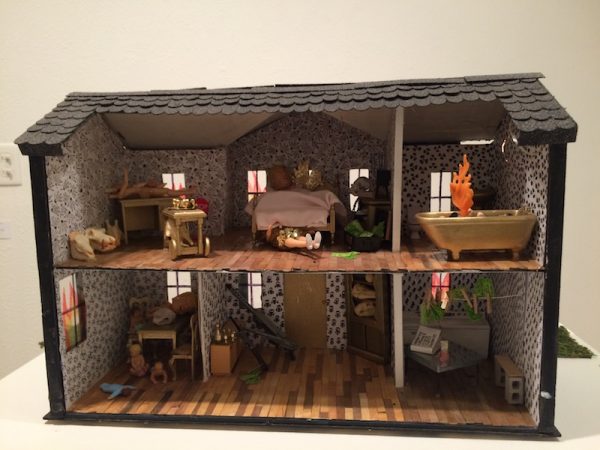 Gee parodies Trump’s America in defiant and unflinching ways that are brash and void of subtlety, mirroring the frenetic pace and character of the current president’s Tweets. Her watercolors and sculpture take on political themes, with action figures reading Good-night, America in a dollhouse dubbed the Black House, and photographs of figures in a gritty trailer-park version of Bosch’s Garden of Earthly Delights. In one series of photographs arranged in a grid next to the sculpture, a doll with Trump’s head (and no feet to stand on) reclines with a naked female doll on his lap. There’s another view of the same figure under a tree with a gilded Twitter bird above his head, a southern border wall prototype on a table, and a suitcase full of cash. Gee’s blending of the scourges of capitalism with her disdain for policies affecting equality for women is all-too evident. 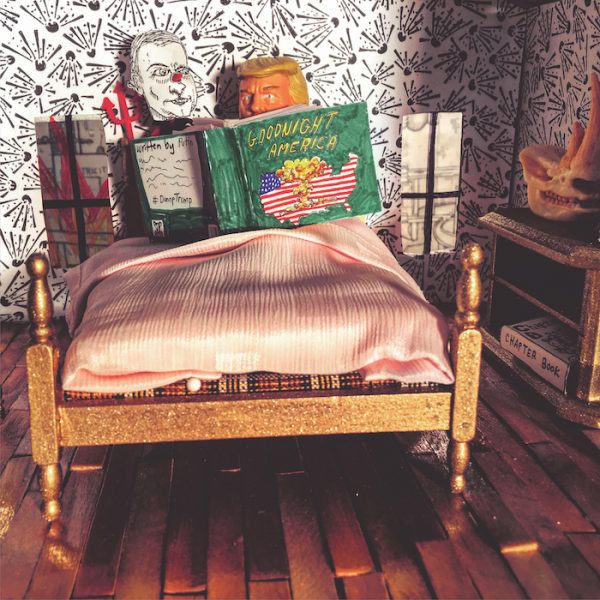 Gee’s unrepentant voice is at the decibel of rage and singes every one of her watercolors in the show. Her axes to grind are laid bare, leaving no room for ambiguity. In one painting the watercolor text reads “MY TEACHER SALARY DOEN’T PAY ENOUGH TO JUSTIFY FRAMING MY ART; MUCH LESS, CARRYING A GUN.” Below it is a painting of a vagina in a heart-shaped space surrounded by the text “Fuck the Patriarchy.” Next to which is a painting of Trump with a pacifier in his mouth. 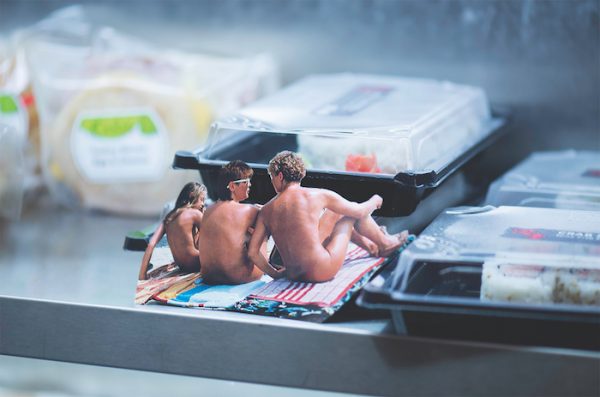 The way that Secrets is installed and curated by 414’s curator/gallery manager John Hartley avoids relegating each artist to any one section of the gallery. Heather Boaz’s photo collages are next to Padgett’s paintings, which in turn are next to some of Gee’s works. Boaz isolates rudely cut-out images from home improvement books and decorating magazines, among other publications, to create a combination of collage and still-life photographs. The cut-outs bring with them evidence of the original scenes and highlight odd juxtapositions created by the artist. The illusion is extended as Boaz combines a shallow-depth-of-field technique with the pairings. The result is a hyper-focus on what the Baltimore native wants to zoom in on: a curtain, a candelabra, nude sunbathers. The power of these images comes from exploiting the latitudes that digital-based media offer —  pushing the surreal digital space to its odd, outer limits versus hoping that it conforms to what we remember of the analog days.

On first impression, Secrets doesn’t form the kinds of connections that make for a well-adjusted curated group exhibition. But a closer look at these works, as they settle in together, makes me finally nod a little, like: “Yeah, okay. I see what you did there.”

414, a house gallery beset on all sides by the gentrified sprawl that’s eating up one of the few remaining affordable places to live within central Fort Worth’s limits may soon be overrun by the seemingly unstoppable forces of change. But for the time being, Well Dressed Secrets, and other shows like it in this space, challenge the momentum and entitlement of these very forces.