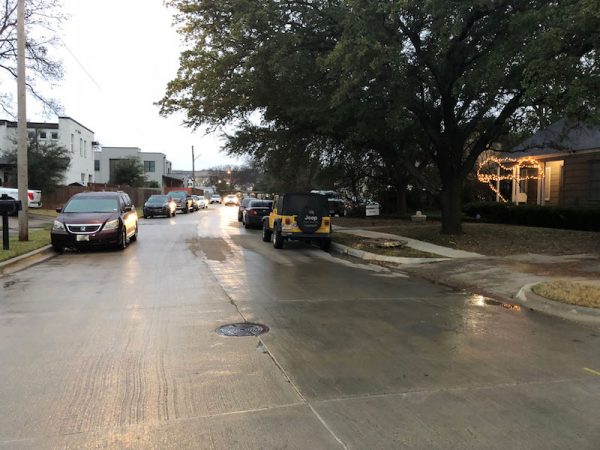 The house at 414 Templeton just north of Fort Worth’s museum district is like many of single-family tract houses that dotted the University Park neighborhood for the past few decades. A drive past the house-turned-art space will reveal the same two white metal chairs that have been on the porch since 414 became a gallery in the fall of 1995. A John Frost plaster sculpture of a drain plug was added to the lawn about 15 years ago, and that, plus the metal frame of an awning, may be the only indication that the building is more than just another house in the neighborhood.

For the past 24 years, Gallery 414 has quietly survived the rise and fall of other art spaces in the city, and its four interior gallery rooms have hosted most of the city’s art scene, and served as a proving ground for artists and curators alike. But on a cold and rainy Saturday night three weeks ago, John Hartley and Adele Krause, the artist couple who have run the gallery since its inception, opened what would be the gallery’s final two shows. 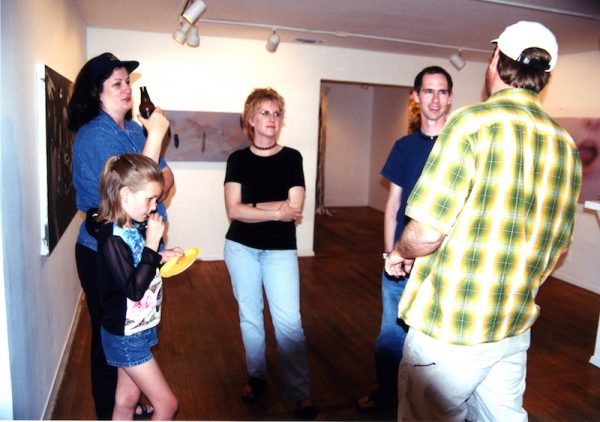 Back in the day: Adele Krause, center 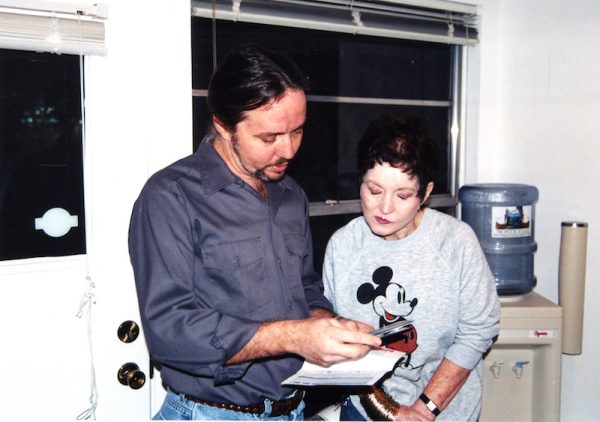 Back in the day: John Hartley and Razz Fiesler 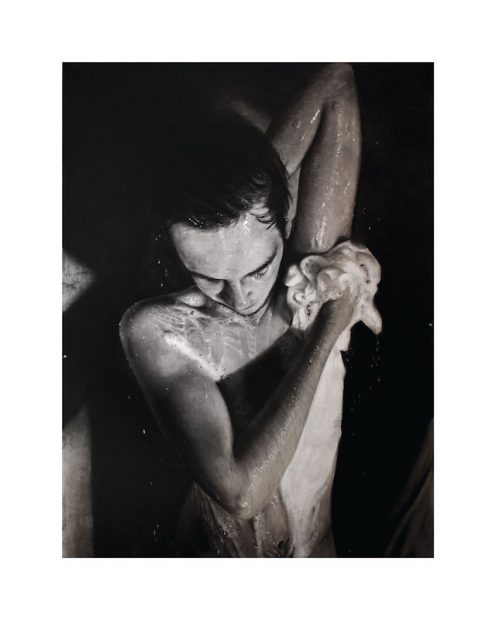 Never Say Goodbye reflects the recognizable influence that Hartley has on his drawing and painting students at TCC; his hand is present in the selections he’s made for the show. Amber Kraatz’s Rinse and Repeat, for example, seems created under the supervision of Hartley’s keen eye for detail. It’s a large charcoal drawing of a figure in a shower, with every lathery soap bubble carefully rendered and every strand of body hair visible.

Razz Fiesler’s Picture Show is a fitting tribute to the artist who owned the 414 space, and her soft painted studies occupy a gallery all her own.

One of 414’s missions was to show the work of both new and established artists. Over the past two decades several galleries in Fort Worth with similar missions have come and gone: There’s a law firm and a new building where the Evelyn Siegel Gallery was on West 7th street; Gallery Kornye West’s building on Camp Bowie is now a wine shop; and The And X and Brand Ten galleries, Alpine Art Gallery and others have all closed or transitioned to online-only spaces. It’s a testament to Hartley and Krause’s resilience that they’ve kept 414 going for so long.

It’s hard to imagine that 414 could have lasted much longer in a neighborhood where similar tract houses have all but vanished in the rash of over-development in recent years. But the University Park/West Seventh neighborhood isn’t new to this kind of change: the Fort Worth Modern’s Ando building replaced affordable housing in the neighborhood in the late ’90s, around the same time that 414 opened. The Wreck Room bar, an incubator of Fort Worth grunge culture and the watering hole for most of the city’s artist class, is now a craft-beer joint for the condo class. 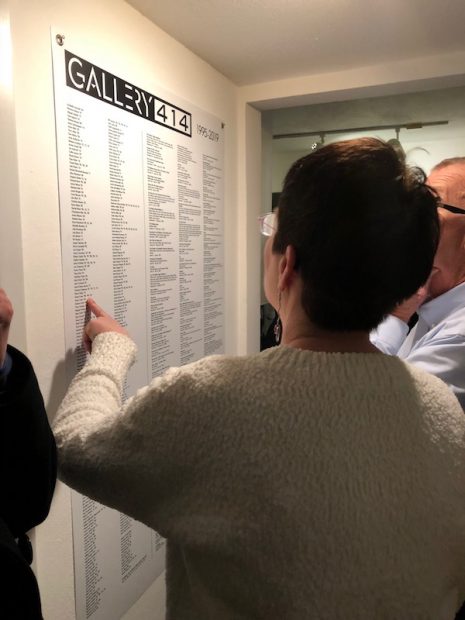 414’s gallery model was always pretty straightforward. Hartley required artists and curators to be present during opening hours of their exhibition on the weekends. It was a big ask, but folks knew going in that they had a stake in the success of their exhibitions. “In 24 years, we never took a commission on sales, and Razz never asked for anything,” Hartley says, “although we sent her the nominal $100 exhibition fee to help offset the utilities, which, of course, probably didn’t go very far. We charged the utility fee because Razz felt strongly that the space would be better appreciated if artists had to pay something, rather than getting it for free.” 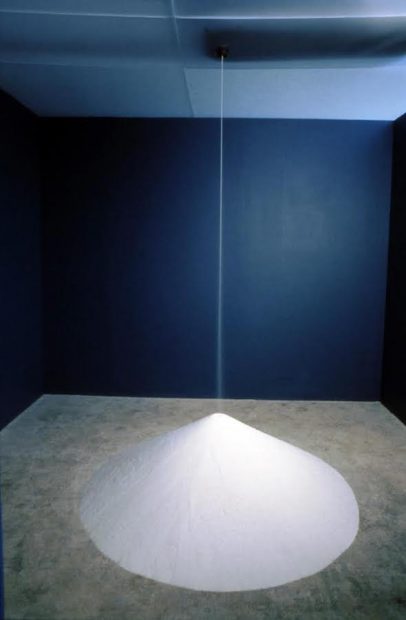 Over the years, 414’s large number of shows (139) and artists exhibited (300) have provided a few dozen memorable exhibitions — some of which opened around the time I first started going to shows at 414. Among them were three shows from 2003: Artists and their Mentors; Recent Works: Jennifer Pepper; and John Frost’s All Things Drain. Pepper’s visionary show, with a large inflated vinyl bubble titled Emoticon Balloon, anticipated a full immersion into our digital selves and presented emoticons and clouds before they were part of our crazy daily lexicon. Frost’s Drain installation was the kind of show that was new to Fort Worth gallery spaces (on any significant scale) — the conceptualism that he built out into physical space with his objects and installations left a strong impression on this wide-eyed, impressionable young artist fresh out of art school. All the work 414 put into nurturing and sometimes financially supporting artists by supporting auctions and fundraisers will leave a hole in the city’s art scene — one that will hopefully be filled with new spaces popping up. 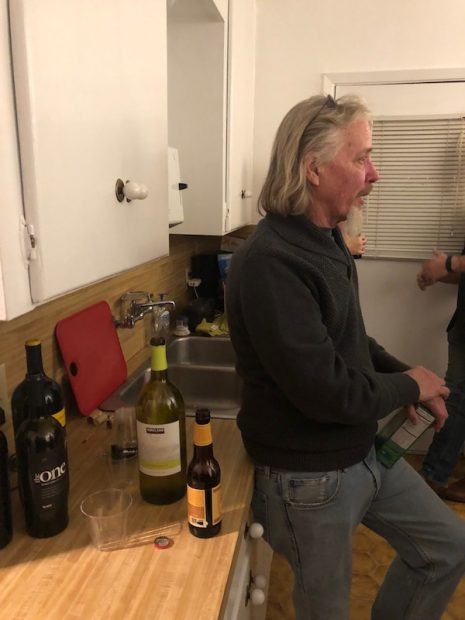 As I left the gallery for what may have been the last time, I took in a few observations and recollections. One familiar scene that never seemed to change was that of Hartley in the kitchen area, leaning against the back door or the kitchen sink, a bottle of Shiner close by as he held court. 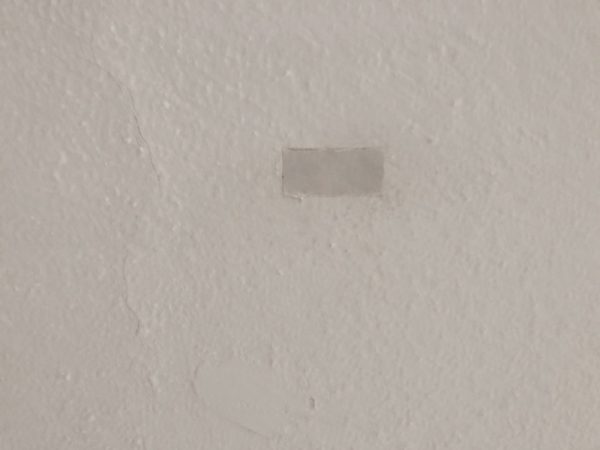 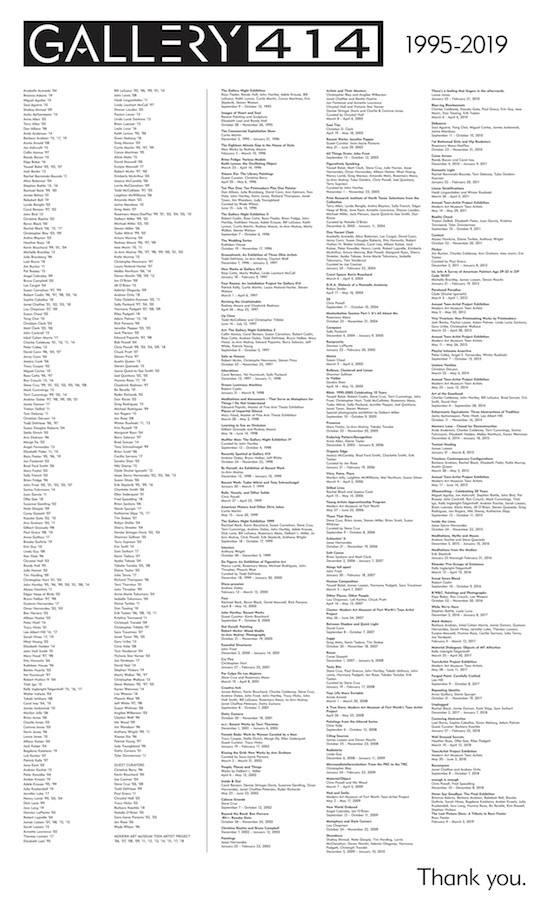 Like the dozens of artists listed on the exhibition poster commemorating the 24 years of the gallery, I, too, had a couple of shows at 414. One of the two secret touchstones in the space that I’ve shared with friends is the small hole I put in the ceiling while installing one of my pieces. I covered it with tape, and unless you’re looking for it, it’s almost completely hidden. The other is a rip of plaster that came off the wall when I attached another work. It was painted over, and now just feels like part of the space. Over the years I’ve looked at these marks as a testament to my time at 414, to marking time itself at 414 — but now they feel like stigmata that all artists who’ve come through those doors will carry away with them in one form or the other. New spaces will grow and take this gallery’s place, and bury our 414 memories within us, to share in other kitchens, over other bottles of Shiner, in other future ruins.

‘Never Say Goodbye: The Final Exhibition,” in conjunction with “The Last Picture Show: A Tribute to Razz Fiesler,” at Gallery 414 in Fort Worth through March 3, 2019.

I love articles like this about local scenes and the spaces that nourish them. It’s important that someone capture these sometimes fleeting manifestations of the evolution of art in specific places. So thanks, Christopher Blay.

It will be missed, especially on fall and summer FW gallery nights. They have had some wonderful shows there. Not to mention John and Adele!

John & Adele, and yes. Razz, Thanxx for providing a breath of fresh air in Fort Worth! I always looked forward to experiencing the art in the chameleon space! 414 will be missed!

While I was not able to attend a great many shows, I treasure the postcards of openings; I am grateful to have been kept on the mailing list, it made me feel a part in art.