Currently on view at Gallery 414 in Fort Worth is a two person show of recent work by Stephen Battle and Layla Luna, titled While We’re Here. This is a complementary pairing: Battle’s work engages us at an expansive cosmic level, while Luna’s work is focused inward on artifacts of a smaller-scaled material world. For this show, the works of each artist are grouped in separate rooms rather than being integrated, which makes sense, given the differences in scale and approach. But both artists share a respect for nature that eloquently underpins their bodies of work.

Stephen Battle has included four studies on paper and four oil-on-canvas works from his ongoing series of diptych paintings, in which he employs abstract expressionism to represent the processes of nature. His exploration dives into the question of ‘Being’—i.e. what is the process of creation? Battle explores his spiritual side in work spanning a two-year period. He says he’s become aware of a fundamental energy that he expresses as a single generative color in the left panel of each of the diptychs. The abstract image on the right panel expresses the physical, natural process of growth. In this way, growth and change are paired in a constant undercurrent: both are different ways of expressing the same energy. 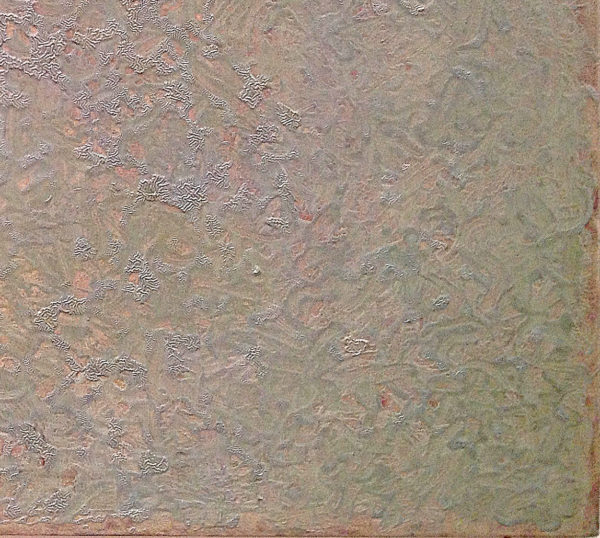 For his diptych oil paintings, Battle typically begins work on the right panel—the abstraction—which is painted in a vertical position. The left panel is painted lying on the floor. Generally, he approaches the panels independently and keeps them separate until they are done. The paired panels share a common color, and the left panel’s mostly solid color is often enlivened with textural effects. This is true of As Stone and Water Drink. The thick surface of the oil paint on the left panel has dried and shrunk in irregular patches, leaving a puckered skin of greenish paint that overlays glimpses of a reddish undercoat. As in the other diptychs, these colors tie into the more complex abstraction in the right panel.

In all of Battle’s paintings, varied brush strokes form their own subtle patterns and provide rhythmic energy. Battle discusses his use of abstraction by acknowledging his debt to artists as varied as Cy Twombly, Robert Rauschenberg, Agnes Martin and Richard Tuttle. In Those Joining Loves, Battle combines in its right panel flat, hard-edged areas of dense black and red paint with fine networks of sponge-like applied color, while encircling lines loosely bind them together. Its dominant black and reds seem to emanate from the same colors in the inky Rothko-like darkness of the left panel. Unhurried and Evident features a denser patchiness of color application in its abstraction, dominated by shades and tints of blue, with strong vertical black strokes and minimal penetration of yellows and reds. In this case, the abstraction is paired with a lighter yellowish green panel. This solid color has a sense of impenetrability due to its glossy surface, but clearly visible is the underlying fine texture of the brushwork.

Battle’s works on paper are titled as studies, but are well-developed works with unique qualities resulting from the combination of acrylic, charcoal, pastel, gouache, pencil and oil on paper, as seen in the Being Series—Study #6. In contrast to the oil paintings that are on two physically separate canvases, the studies are contained entirely on one sheet of paper that is mounted on a thin board and floated from a single piece of wood attached to the wall. The two ‘sides’ of the composition are contained within lines drawn in pencil and have a narrow visual separation of white paper. The impact of these works comes from the immediacy of the varied media and subtle interaction of the layers of transparent fluid, together with the dry media that has left its marks on the tooth of the paper. The energetic density and simplicity of the single color on the left side is a foil to the amorphous layers of abstract forms on the right side. 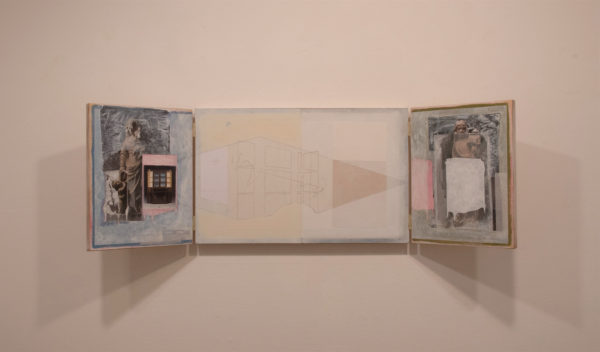 In contrast to the ephemeral character of Battle’s abstract search for Being, Layla Luna’s work is invested in the material world, as she lovingly preserves memories through the natural and man-made objects she has collected.  Her most recent bodies of two-dimensional work have contained imagery of empty urns, vitrines and cabinets that captured space, while evoking the historical idea of cabinets of curiosities. One of her works in this show titled Mother continues in this vein, as it pairs drawn images of empty cabinets together with photographic reproductions of Virgin and Child statuary collaged onto wooden supports hinged in a triptych format. According to the artist, this work is autobiographical, reflecting her assumption of the role of a stepmother in the life of a child, together with the empty cabinets symbolically providing spaces for new experiences and memories to come. 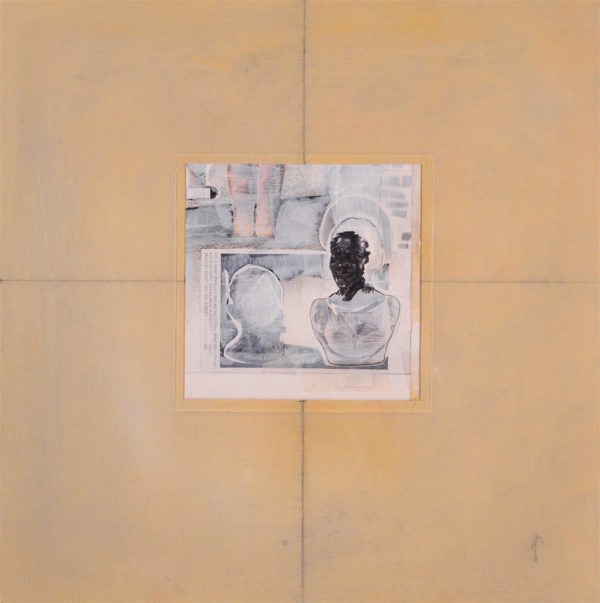 Luna mines art auction catalogs for images because of their relevance to her interest in collecting and their impact on the valuation of art. She cuts out selected images and collages them into her works to develop narratives for the viewer, as in Mother and A Story Told through Auction Catalogues, 1-3.  Her displays of collected objects in the exhibition are often things she has saved from places she has lived or visited, such as fragments of her grandmother’s wallpaper that are hermetically sealed in clear packets in Someone Else’s Wallpaper. Sometimes she preserves remnants of her own art projects, as in Charles’ Bluebird, in which a small glass jar holds the curled, cut out letters to a Charles Bukowski poem that were removed from an earlier art piece. She offers the items with titles but no background information, leaving it to viewers to make their own associations. 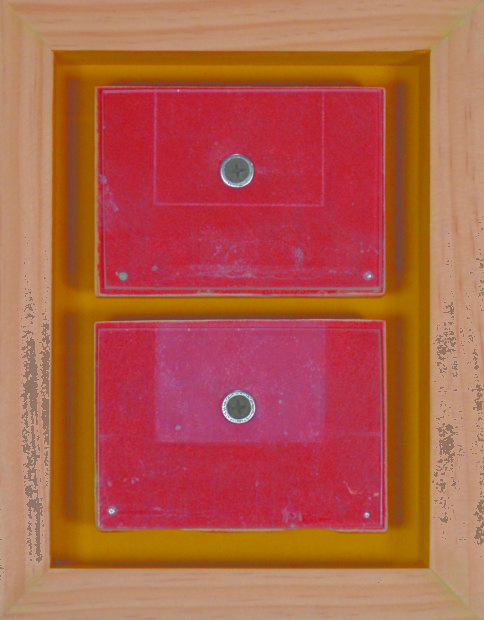 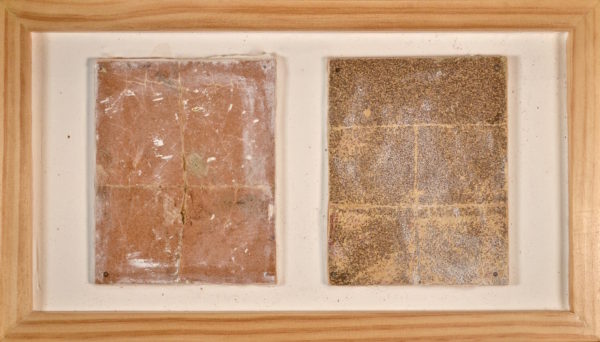 Luna also collects and memorializes working materials such as used pieces of sandpaper in A Love Note to Sandpaper in which she has drawn on the sandpaper with pastel. The sandpaper is pressed between plexiglass and the wood backing and secured with wood screws that become a prominent part of the presentation. A similar affection is displayed in Preserving the Creases, in which not only the creased sandpaper is preserved, but also the powdery remains of the object that was sanded. 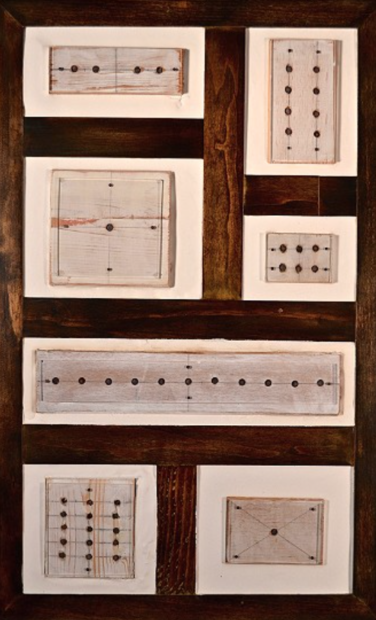 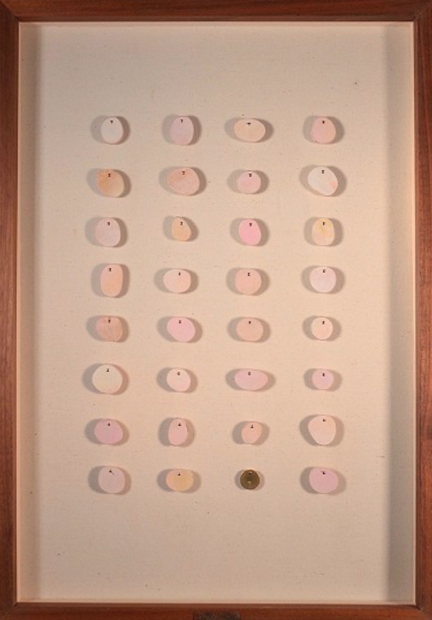 Luna’s refined sense of craftsmanship is evident here, and the careful manner with which the objects are contained, framed and displayed shows her respect for these storied bits of her personal narrative. In Juniper Berries, April 2, 2016, tiny compartments have been drilled into seven separate wooden blocks pressed into plaster surrounded by framing; these round spaces contain and preserve the now-desiccated berries. For Luna, this piece holds her initial memories of the varied colors of the fresh berries and her experience of collecting them on her family’s property in Glen Rose. Other collections of branches and snail shells are similarly memorialized in Homestead and Collection Day. Luna’a interest in the precise arrangement of natural history collections is reflected in Snail Shells #4: the orderly rows of pierced wooden discs colored with Flashe paint hang from brass nails and stand in for the actual artifacts here, and her use of mixed media in these pieces is a notable new development in her work.