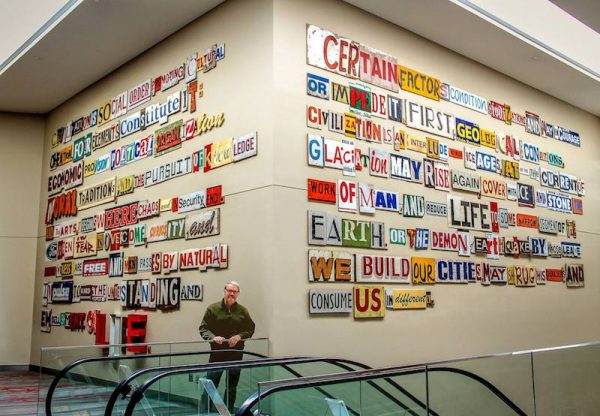 In 2003 San Antonio-based artist Gary Sweeney completed an ambitious work, four years in the making, called The Story of Civilization Rewritten With Discarded Signs. Up until now, and due to its size, the only place it’s ever been exhibited was a Lawndale Art Center in Houston. But now the city of San Antonio has bought it and installed it permanently in the Henry B. Gonzales Convention Center.

This is part of an ongoing initiative by the city under its Public Art San Antonio (PASA) program, which has also recently acquired and installed works at the Convention Center by Mel Casas, Ken Little, Kelly O’Connor, Ethel Shipton, Nate Cassie, Angel Rodriguez Diaz, Richard Armendariz, and Alberto Mijangos.

Many years ago I set out to create an artwork that was going to take me a long time, and was guaranteed to fail. So I set out to recreate an entire book made from discarded signs, which was my medium at the time. It took me four years to collect the first two paragraphs of “The Story of Civilization” (the first volume is 935 pages), so obviously I wasn’t going to be able to finish. It was exhibited only once, at Lawndale Art Center in Houston, because they had large enough walls to display it.

For fourteen years, the signs had been taking up all my wife’s storage space in the garage, much to her delight. A couple months ago, The City Manager of San Antonio stumbled upon a photo of it, and insisted that the city buy it and install it permanently at the Henry B. Gonzales Convention Center. 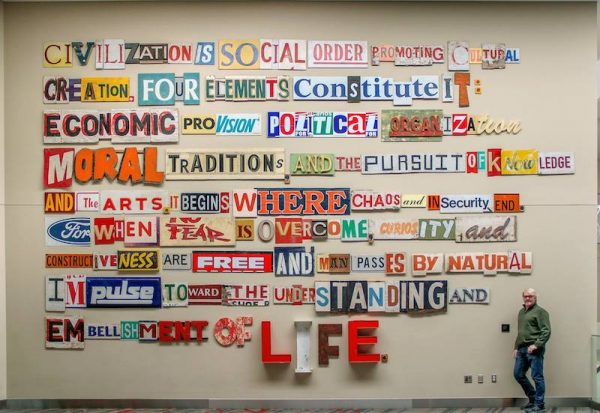 There are two commas missing from this, which will be added, so you grammar Nazis can chill.

Congrats to the all of the artists, and bravo, San Antonio. 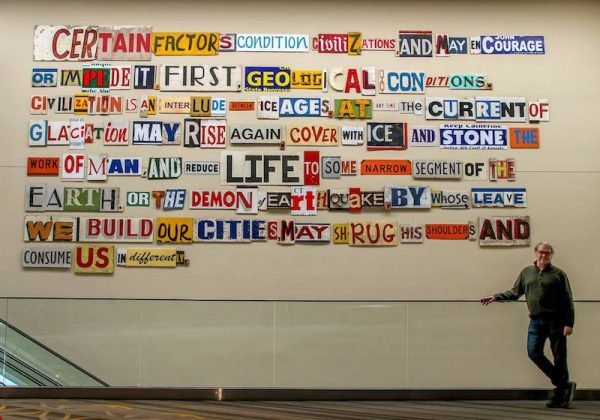 How did this video not go viral eight...

Great articles, but you folks have spelled Gary’s name wrong throughout the article. The proper spelling is Sweeney.