by Paula Newton May 5, 2017
FacebookTwitterEmail 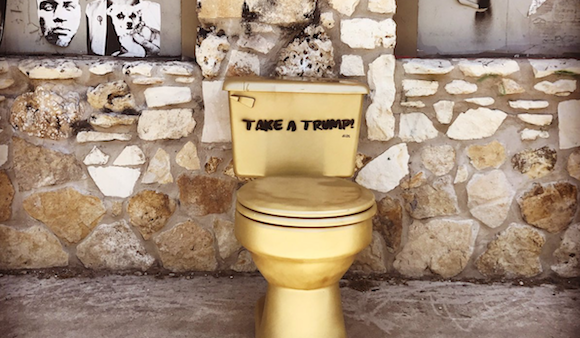 Toilets that have been spray painted gold and labeled “Take a Trump” have been popping up across the country to commemorate President Donald Trump’s 100th day in office. A stencil of a pig wearing a crown is painted on the inside of the lids. Many of the toilets were placed in and around Indianapolis, where the art collective ArtFinksters is apparently based, but they have also appeared in cities like Austin, Portland, Miami, Chicago, Los Angeles, Las Vegas, and Denver, according to the Indianapolis Star.

No one knows if this project was inspired by Maurizio Cattelan’s golden toilet installed last year at the Guggenheim Museum rest room (and images captured by Glasstire here), or if the idea is a universal one. Speaking of Austin, ask Austin Powers:

If We Didn’t Know the Art World Was...