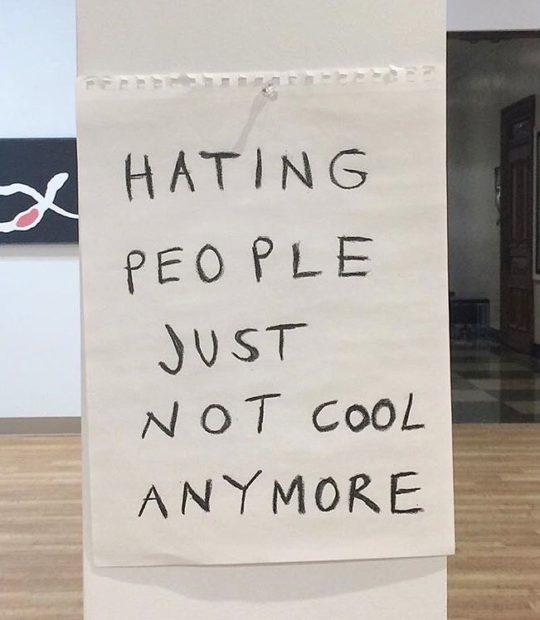 Running through April 10 at Texas Women’s University in Denton, Bible Study features new works by Pierre Krause, many of which were begun during a recent residency in Switzerland, and by Paul Winker, who’s been around. This two-person show has been potently sourced from traumas stemming from loss of faith, and ranges from socio-political works created under the duress of isolation, to more pointed scriptural critique. This candle’s burning at both ends.

Bible Study’s colorful slit-eyed giddiness welcomes extended saturation in its sleek cozy funk. This show has what you might call an ‘aura.’ Recalling Madvillain’s odd and unweildy 2004 hip-hop track America’s Most Blunted—MF DOOM raps about ripping pages out the “Good Book” to roll his joints—Krause and Winker pass this one to you, constructing a show viewers are invited to project their beliefs into. “Feel free to process,” Krause reckons.

Where Winker respects sanctimony and embraces scriptural dissection, Krause abandons preservation of Christian iconography after a certain point. The big-ass crucifix is a red herring. Krause: “It is the most inspiring thing. It’s ‘Yeah, I’m poor, I don’t have shit, but look how big my chain is!'” This thematic delineation evokes a similar dissociative vein within the church. “We’re in trouble, America. Lot of un-Christian things happening.”

For this lapsed reviewer, one vexing digression prompted by so many direct references to Christ within the gallery is the eventual indictment of carpentry as a potential art form. The truth is out there. Van Gogh once described Jesus as “an artist greater than all other artists, scorning marble and clay and paint, working in the living flesh.” Ew. And also Ew: mulling over Jesus as artist. Who has time for it? Who has time for religious devotion, when, these days, it simply seems to amount to a prelude for an argument? 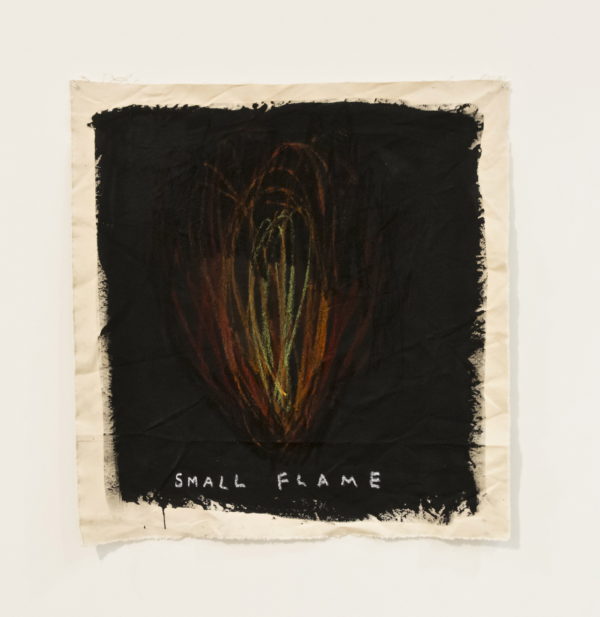 Krause seems game, but barely, and approaches Bible Study with abandon, even openly confronting the audience. Presenting a sub-argument that mostly ditches premise, hope ultimately subs in for faith. But not the kind of hope you hope to have. To be a saint, one must suffer. If the artist has been talking to God lately, these works appear to conceal the contents of that conversation. A heart on a sleeve could be risky, but here it builds mystery, lending grandiosity to humble works. Winker calls Krause’s skirting around Christianity a “decompression of years of indoctrination and expectation.” Having long co-opted biblical imagery like halos and wings to twee effect, the artist defies labels, and categorically falls near post-internet-aware, though sans technology. Krause is open about this relationship: “My studio is on the internet.”

Krause’s lo-fi work conjures contemporary web language. In The Singularity Is Near, future theorist Ray Kurzweil posited that one day not only will humans be able to place themselves digitally within holodeck-ian virtual environments, but inversely, through the manipulation of nanobots, digital elements will manifest themselves within our physical world. Krause’s work does this, repurposing mental representation for building a meme-verse to better reflect sincere intentions of the heart.

Returning just a month prior to the show’s opening from a stint in French-speaking Switzerland, Krause’s energy seems imbued with newfound swagger, manifesting in some seriously next-level selfies on the artist’s Instagram account. If you wonder how that’s relevant, you really owe yourself a perusal! This confidence might be a spin off the agony of simply being a Texan in Geneva in January. “I’m harder now. I see the language changing.”

Watching our country catch fire on a TV (in French, no less), Krause asks audiences to revisit Kanye’s Trump visit in Ye Eyes—a zoomed and cropped paparazzi photo. The man George W. Bush accused of delivering his lowest moment as leader of the free world nearly took Krause down, too. “He’s literally cracking up as a public figure and I’m looking into his eyes in Switzerland and feeling the same.” 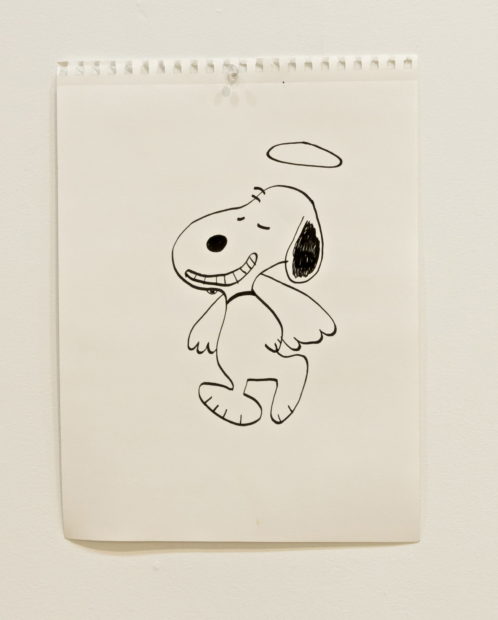 At the opening, I overheard Winker’s paintings described as great for being “flat, but not,” which makes sense, as he paints horizontally. “My textures come from gravity, so I paint flat.” His works display bold demarcation of line-work, heavy paint, lively color and intelligent boundary, often displaying little or no depth. Paint surfaces, some high-gloss, some matte, behave according to characteristics of stone or other elements determined by settling. 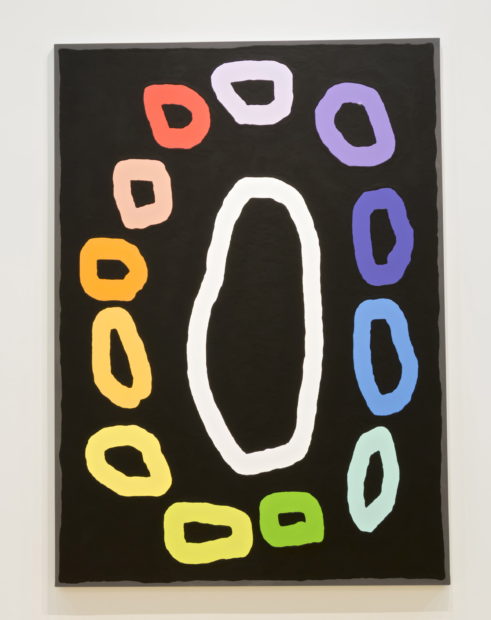 One of Winker’s centerpieces and perhaps Bible Study’s knock-out, Something for Everyone, sports a super-gay color palate that puts his work in conversation with recent works by fellow young Dallas painting contemporaries Art Peña and Luke Harnden—a spectrum perhaps incepted by Michelle Rawlings last year. Don’t call it a boys’ club. Or do. Something depicts a ring of 12 smaller rings, but 12 what? Apostles? Tribes of Judah? Months? Monkeys? Mumbling something something about the United States’ refusal to adopt the metric system, Winker admits to having a thing for numbers, which is a pretty annoying tic to pass on to others. Leaving no trail of breadcrumbs (save for its queer hues), his painting faces Krause’s It’s Not. Speaking directly to Bible Study’s presumed audience (collegiate Texas women), the dialogue between these two pieces reminds viewers that just last month lieutenant governor and stomping shitheel Dan Patrick was pitching his bathroom bill as a crusade to rival the Battle of the Alamo. 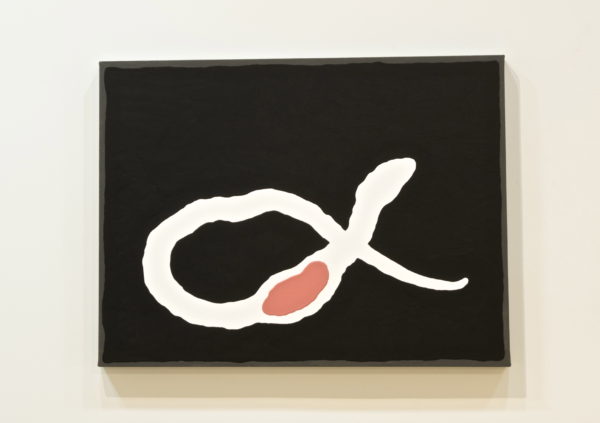 Winker’s Swallowed (Whole) conflates some biblical lore. The Snake (coiled like an ichthys) did not eat from the Tree of Good and Evil, and the apple-y blob inside him recalls Jonah’s tenure inside the Whale. This entanglement and misplacement of Biblical mythology points a finger toward the blissfully unaware who leave their Bibles at home.

His other show stopper is Adam & Eve, a two-part series that got Bible Study slapped with a school-issued explicit content notice. Winker’s winky diptych depicts a dick and vag, and a very Virgin Mary vag at that—earning the artist a real “Oh shit!” moment when you see it. Kudos for going there and handling it so deftly. 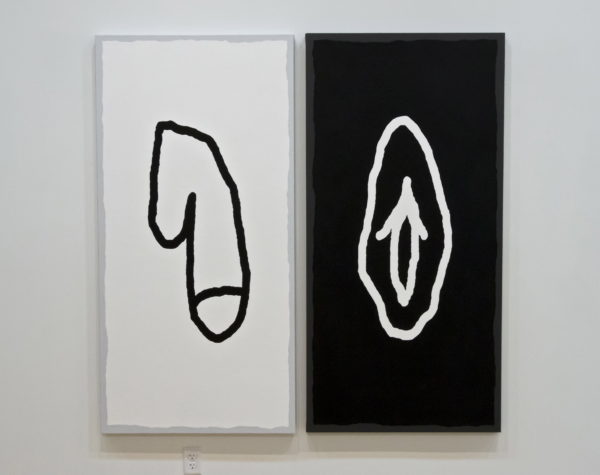 Bible Study was Winker’s idea, by the way. The show may feels like Krause’s, but Winker says: “I am very sensitive to other people’s energy.” Both artists saw a chance to map the departure of faith. And while its title might invite unwanted discussion, the show itself won’t. Respectful, funny and fully loaded, Bible Study casts a broad net, and its message is revealed in code. But is the Bible big enough? Krause and Winker’s tangible comradery supplants the more pious elements of the show and achieves a perplexing synergy. It’s versus before verses, no doubt.

Heads Up, BFAs and MFAs: A Real Guerrilla...