‘S-Town’ Is Right on Time 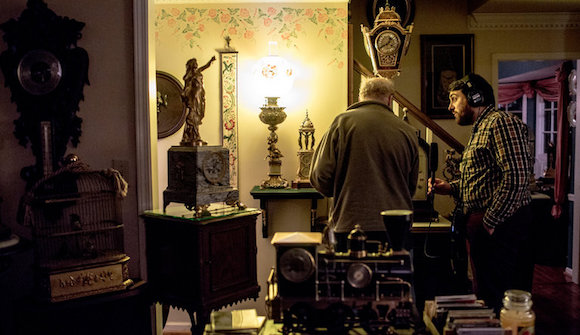 Brian Reed, right, interviewing a subject for the podcast “S-Town.”

After an election that has thrust the populist forces in America to the foreground and widened the gap between rural and urban cities, “S-Town“, from the creators of “Serial” and “This American Life“, takes us into the rural south to Woodstock, Alabama. Brian Reed, narrator and producer, received an email a while back from John B. McLemore, an horologist, conspiracy theorist, and the protagonist of this podcast. The email was a story tip to come and investigate a murder in “Shit-town”, as McLemore likes to refer to Woodstock.

Though not your traditional who-dunit murder mystery, “S-Town” ends up winding us deeper into the town of Woodstock, its people, and their struggles. Despite its somewhat unsettling vignettes – like an overweight man wearing a John Deere hat sporting a “Feed Me” tattoo on his stomach or one main character describing his moral compass being based on the actions of his father who was a convicted sex offender – you can’t tear yourself away from the story. Not because of the sensationalism of “Dateline” or “Cops”, but because of your growing empathy for the residents, the town, and the situation as it has become in rural America.

This podcast initiated by and based around this one man’s life touches on the economic and social pressures of the people living in Woodstock. But despite his constant frustration with “Shit-town, Alabama”, this horologist leaves us to consider what it means to be part of a community – to give a shit – and live a meaningful life. McLemore explains that when you subtract sleep, time at work, time commuting, and time spent on family commitments, “the average industrialized man with 25,000 days on this planet may easily secure only about 4,500 waking hour days of beneficial life. That’s a quarter of your life, if you’re lucky.”

So according to John B. McLemore we merely have a quarter of your life during which we can pursue matters which are meaningful to us. Do yourself a favor and listen to “S-Town“.