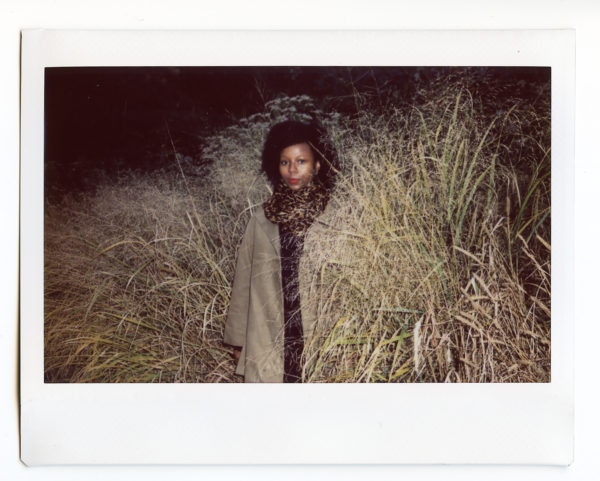 Her Feet Planted Firmly on the Ground, curated by Caroline Docwra at the Houston Center for Photography, includes six photographers: Christa Blackwood, Susi Brister, Jennifer Crane, Ellie Davies, Naima Green, and Laura Plageman. As the show’s title suggests, the curatorial impetus of the show is a renewed and revised consideration of the landscape, and an assertion of a female presence in that landscape. Press materials state that these photographers use the techniques of the nineteenth century to reference a predominately male history as “a foundation for their work as they insert their new perspectives into the genre.” The standouts of the exhibition are Green, Brister, and Blackwood.

Naima Green’s exceptional series Jewels from the Hinterland is twenty-six unframed works that vary in size and fill one of the exhibition’s walls. Some are small enough to draw viewers close. Green describes her project as an exploration of “the absence of brown bodies in green spaces as places of leisure.” This series is part of a larger project of photographing “subjects who identify as multi-disciplinary artists of color, making portraits of creative individuals in and around New York City.” Green states she “makes images of these artists feeling at ease in natural green spaces, regions where black and brown urbanites are not ‘supposed’ to be at home: our hinterlands.” The hinterlands of Prospect Park, Brooklyn Botanical Garden, and other public green spaces in and around New York City serve as Green’s landscape.

Often the green space envelops Green’s subject with ease and comfort. Jenna, Brooklyn Botanical Garden (2016) features a young woman in front of a Yellow Crane Flower (there is a sign). Her golden eye shadow plays against the gleam of the leaves and the color of the flower. Lines of her tattoos (particularly on her upper right shoulder) and of her necklace create another formal relationship with the landscape. In Doreen, Prospect Park (2016), the subject’s white fleece jacket and her surrounding white blossoms create a visual interplay between clothing and environment; a few leaves fall upon her arm. Some of the branches intercede between viewer and subject, framing and, in some ways, separating us from her as she is enclosed by the landscape. She becomes one with it. 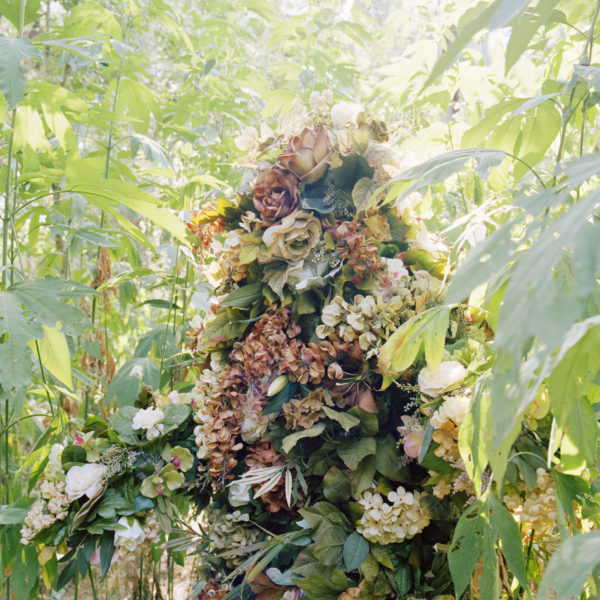 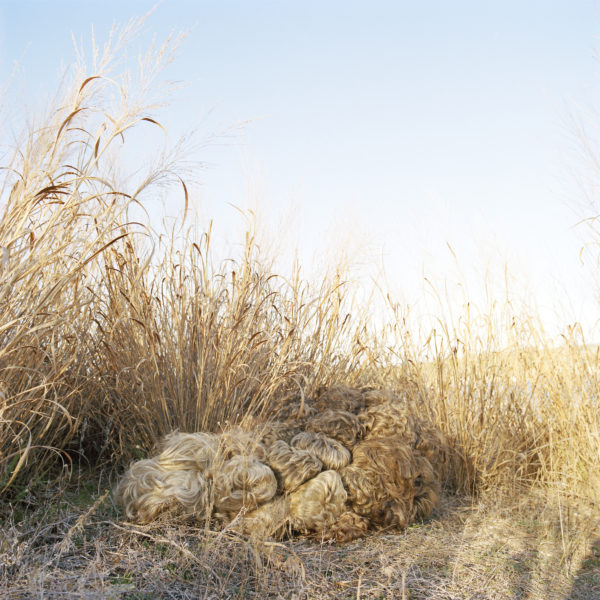 Susi Brister’s work, part of a series titled Fantastic Habitat, deals with the natural and unnatural in the landscape. In most of Brister’s photographs, a mysterious bodily presence or oddity overpowers the scene. Photographs such as Flora (2014) and Loose Waves (2016) play upon a presence that is both seen and unseen, rendered visible and invisible. In Flora, a figure is covered in flowers and framed by plants within a wooden frame. The color is lush. Loose Waves features wigs upon wigs piled like an offering against the dried, parched landscape. Another work, 613 Silky Straight in Swamp (2013), offers a surrealist monster hunched over and lurking. The white-haired artificial being looks out of place and awkward. The landscape itself doesn’t seem to hold up against the oddity. Neon Shag (2014) appears so bright and fresh in its green on green that it seems buoyant. In most of the works, there’s a sense of an “almost camouflage,” a longing for the body to become one with landscape that does not quite, or ever, work. In their artificiality, they resist such a union. 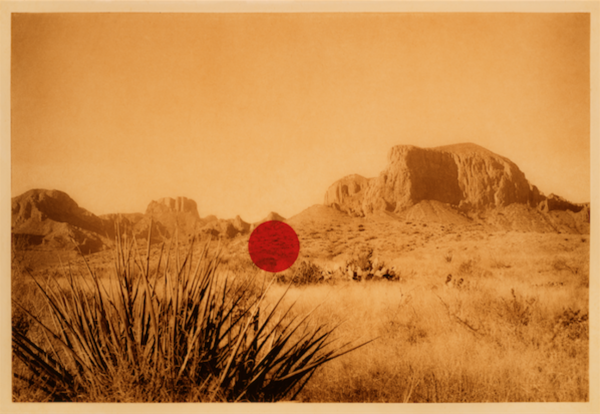 In Christa Blackwood’s photographs, from the series, Naked Lady: A Dot Red, she questions the prominence of the female nude in the history of photography—particularly in nude portraits by such canonical figures as Edward Weston and Alfred Stieglitz of lovers who were also artists (Tina Modotti and Georgia O’Keeffe). In Chisos (2013), Blackwood uses the clearly old-fashioned technique of tri-monoprint photogravure (in terms of the photogravure). Here, as in other photographs such as Solitario (2013), she places a red dot in the landscape, which acts as a kind of locator beam, suggesting perhaps the dot remains in place of the nude. There are no naked ladies in Blackwood’s series (or in the exhibition itself). I’m not sure that, without Blackwood’s wall label, the bodily placement (and its absence) in the landscape holds up. The red dot, large and hard to miss, evokes John Baldessari. When I visited the show there was a group of young women in the gallery space, and I could hear their discussion—they were in front of Blackwood’s pieces (maybe jokingly) getting annoyed that they couldn’t find the naked bodies, and, in fact, demanding them. But the visitor is reflected onto the landscape in Blackwood’s framed photographs, and I thought about my own body’s placement within—via the photograph itself in the gallery space, or at the Chisos Mountains in Big Bend—with my own reflection following from red dot to red dot in Blackwood’s works. 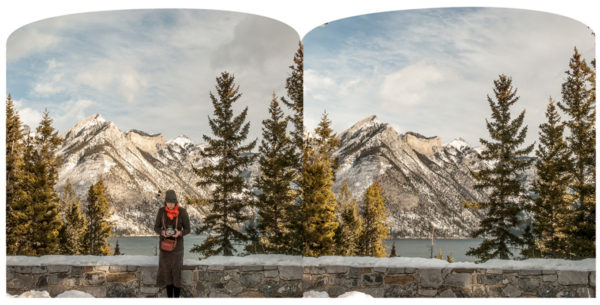 One misstep in the exhibition is Ellie Davies, whose series Stars doesn’t quite work. Layering forest landscapes and images of stars from sources such as the Hubble Telescope, she achieves images that are pretty, but not much else. (This may be the “alienation” Davies intends to create for the viewer that becomes a lack of connection to the photographs.) In Laura Plageman’s Response to Print of Green Hill, Washington (2010), a torn edge of a print defines the top of a hill, emphasizing the materiality of the print through, as elsewhere in Plageman’s work, her physical alterations to a print (then rephotographed). Jennifer Crane, in Her Fears / Her Dreams (2015), effectively uses a stereo viewer with multiple image cards that can be placed in any order creating a sense of displacement in the narrative and between her, the viewer, and the landscape—especially as one tries to move the stereo viewer to get an image in focus. In the process of viewing, the female body disappears (sometimes absent altogether), at times drifting in and out of focus. As the images go out of focus and then come back into focus—as the body loses and regains its place in the landscape—so, too, does the exhibition’s focus falter and return.

Her Feet Planted Firmly on the Ground is on view at the Houston Center for Photography through May 7, 2017.