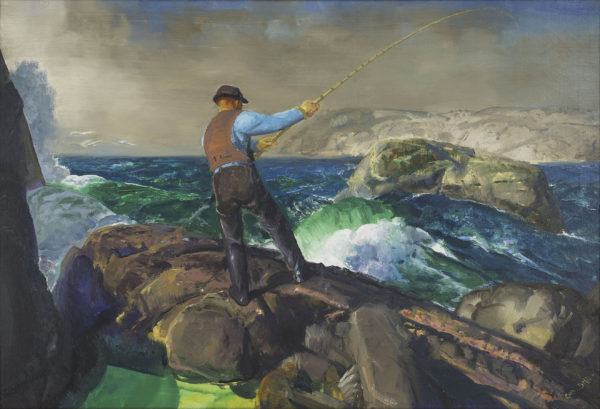 The Amon Carter Museum of American Art in Fort Worth has finally landed a Moby-Dick of acquisitions: it has added a George Bellows painting to its collection.

The Amon Carter had already collected a number of notable lithographs by Bellows, who helped reignite the form, but the museum recently purchased its first Bellows painting, titled The Fisherman, from 1917, in a private transaction. Bellows, most known for his city scenes, was also captivated by the ocean and began painting seascapes in earnest in 1911, though these were usually scenes of the east coast. The Fisherman is one of his rare west coast paintings, undertaken when Bellows was visiting the California coast (and teaching in San Francisco); he painted it en plein air in Big Sur.

Via the Amon Carter: “In this bold, dramatic painting Bellows used his signature exuberant brushstrokes and thick oil paint along with a palette of brilliant hues to depict the raw power of the ocean,” says Shirley Reece-Hughes, curator of paintings and sculpture. “The subject of the lone fisherman trying to harness nature suggests the ethos of the physical and ideological manhood of Bellows’ generation that stemmed from President Theodore Roosevelt’s belief in the ‘strenuous life.’ ”

The Fisherman will be installed this week at the Amon Carter alongside the lithograph of the Bellows 1909 boxing masterwork Stag at Sharkey’s. For more info, go here.