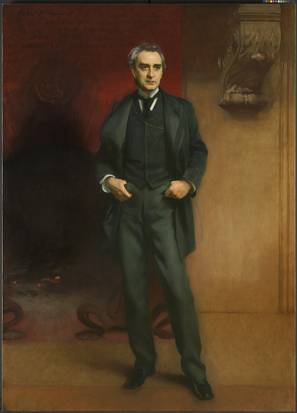 The Amon Carter Museum of American Art in Fort Worth has announced the acquisition of a major, full-length painting by John Singer Sargent (1856–1925). The work, titled Edwin Booth from 1890, is a portrait of the great 19th-century Shakespearean actor, Edwin Booth (1833–1893). It was commissioned by members of The Players in New York City, a private club for actors founded by Booth and his friends in 1888, and remained there until 2002, when debt forced the club to sell it to a private collector. The purchase price was not released, but The Dallas Morning News reports that art experts estimate it to be about $5 million.

Sargent is considered to be the leading portrait painter of his generation and Edwin Booth among his greatest American male portraits. His contemporary supporters included Henry James, Isabella Stewart Gardner (who commissioned and purchased works from Sargent, and sought his advice on other acquisitions), and Edward VII, whose recommendation for knighthood the artist declined. Edwin Booth is considered by some theatrical historians to be the greatest American actor of the 19th century, but his achievements are often overshadowed by his brother, John Wilkes Booth, the man who assassinated President Abraham Lincoln.

Amon Carter director Andrew Walker said Thursday, “We have long been a museum that collects works of singular achievement, and this acquisition marks a new high for the Amon Carter collection—a destination picture for Fort Worth.” Edwin Booth is on view in the museum’s main gallery.

Amon Carter Getting a Facelift And it Sounds...

Not to be a pill, but the Booth portrait IS indeed ‘full-length,’ as the report indicates, but it’s NOT ‘life-size’ as the headline indicates. The painting is actually more than seven feet tall, and Booth was five foot, seven.

Ha!(and huh!), it doesn’t look as if the extra space above and below the figure equal the 1’5″ (by your measurements) to accurately call it “life-size” but, being a huge Sargent fan, I’m definitely going to the Amon Carter to check it out. Now I’ll bring my tape measure! Thanks.

It’s painted as big a Booth’s personality, not his height.

I get the feeling a Sargent “paughtrait” owner has two best days. Screw an outboard on the stretcher. Invite your accountant friends…. Not that it is an unwise investment. Just disappointing and so full of hot air as to be unsinkable.

He made some great work, close to his heart – but this isn’t it.

Actually, it was painted to hang above a fireplace, so Sargent worked the perspective (you look UP at Booth). Yes, Sargent flatters the man as larger-than-life, but from that angle, he does look closer to his real-life height.