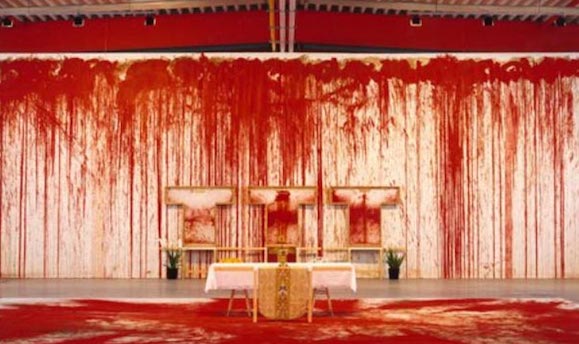 The Dallas Biennial 2016 (DB16) has officially announced that for its third installment, instead of staging a city-wide, months-long survey of regional and international artists (which it did last time), it will exclusively host and present the work of Hermann Nitsch and Teresa Margolles, starting December 31 at The Box Company in Dallas.

Nitsch, 78, is of course a co-founder of the brutal and controversial 1960s movement we know and love as Viennese Actionism. Margolles is a Mexican conceptual and performance artist and founder of the artist collective SEMEFO; her work deals with social violence and death. Featuring these two international heavy hitters is a fresh move for DB16, whose founders are Dallas-based artists and curators Michael Mazurek and Jesse Morgan Barnett.

DB16 writes that it will “present one of the most  comprehensive exhibitions of Nitsch’s art to be seen in the U.S,” and will include his paintings, videos, and much documentation of his 147 performances to date. For DB16, Margolles will “present site-specific, object-based and performative works which furthers her research in victimology, socioeconomics and class distinctions.” Both artists will be in attendance on December 31.

For more info, keep your eye on this space.