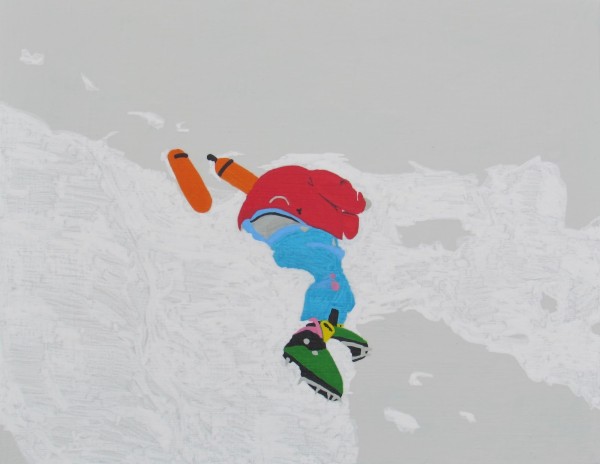 Alexander Paulus’ show at Ro2 Art in Dallas is disgusting. The Memphis-based artist has created a crowded installation of grotesque, faux-naive figurative paintings that are unapologetically in your face and ridiculously successful.

In Paulus’ statement for the exhibition, he says that his use of brightly colored paint “seems to curb…the strange imagery and make it more palatable to the viewer.” I happily and completely disagree. While many of the pieces appear friendly at first (from across the room, and due mostly to shape and color), once you engage more intensely with them they begin to show their viciousness. And each painting seems to have its own personality: some are sarcastic, some are creepy, and others are downright sad.

Many of the works in the show reference pop-culture icons that are just (or quite) past their prime—Cast Away, Honey Boo Boo, and Kevin Bacon are just far enough out of the limelight to feel overripe, but still recent enough in our cultural psyche to qualify for ‘ironic.’ But these paintings have darker slants that undercut their gimmick. 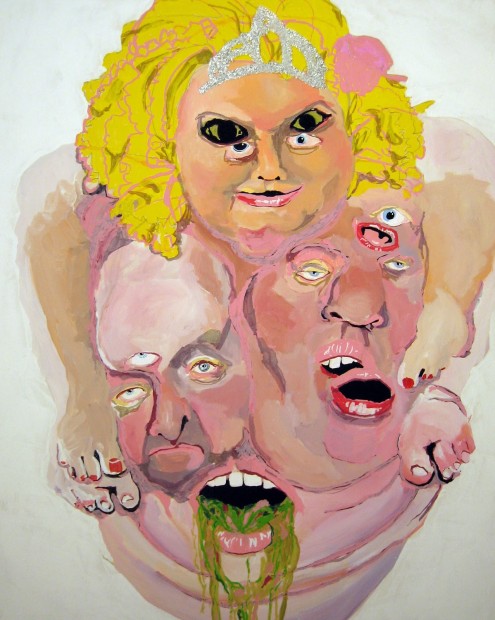 The height of civilization

In The height of civilization, we see one of Paulus’ characteristic forms: an amorphous blob of a person on a white background. The figure, an amalgamation of characters from the reality TV show Here Comes Honey Boo Boo, is an aggregate of faces and distorted features that somewhat resembles the photoshopped images of Houston artist Phillip Kremer. Paulus’ painting, however, gives off a more fleshy and realistic feeling due to its medium. The physicality of paint allows Paulus to fully model the creases and folds of the bodies he creates. Rather than being pristine specimens, Paulus’ figures are more like something out of a horror movie: eyes, mouths, and limbs are haphazardly sewn together. 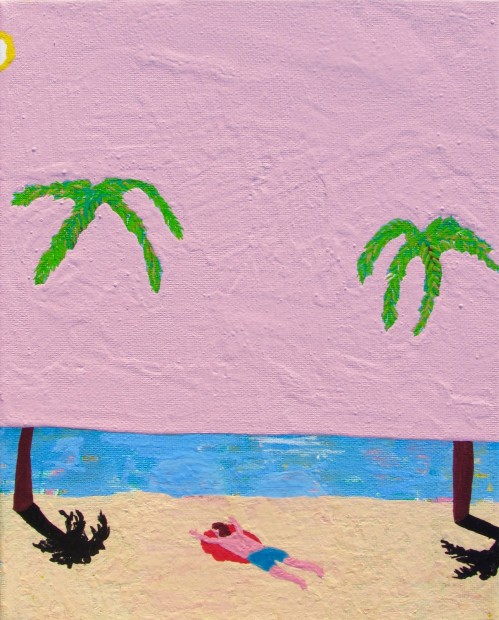 In this way, Paulus’ paintings are actually much about surface quality. Far too often we recognize the importance of material usage and “the surface” in abstract painting, while dismissing it in more figurative work. We think that since figurative paintings have hard and fast subjects, the materials are just there to make the subjects work. But Paulus, in reverse, uses his subjects to make his materials work. 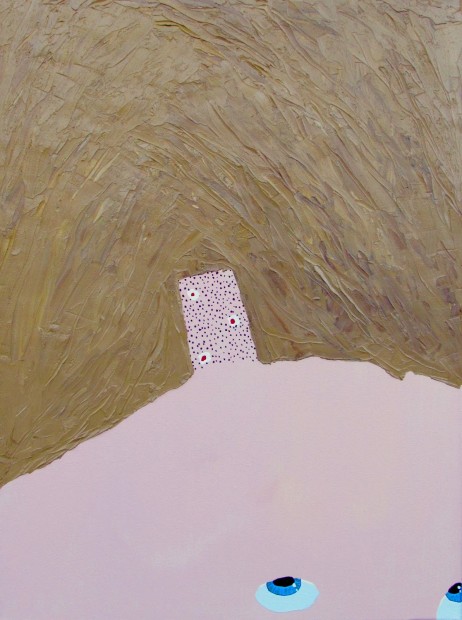 The most explicit example of this is These hair clippers suck dick, a (presumably) oil and acrylic painting on canvas. The piece contains another of Paulus’ signatures: ultra-tight cropping. The entire top half of the work consists of impastoed, glistening paint that, through all-over streaks and ruts, creates a full head of hair for the figure below—with the exception that one small section of the figure’s hair is stubbly and bleeding as though it has been violently shaved off. Most of the painting’s success is due to its surface; in creating a painting based on the opposing tactile qualities of hair and skin, Paulus lets his materials and technique take center stage, allowing the paint to do a lot of his work for him. The same goes for the mockingly titled She was the most beautiful girl in the whole gas station, a zoomed-in work that shows a (paint) ravaged face framed by oily golden-brown hair. 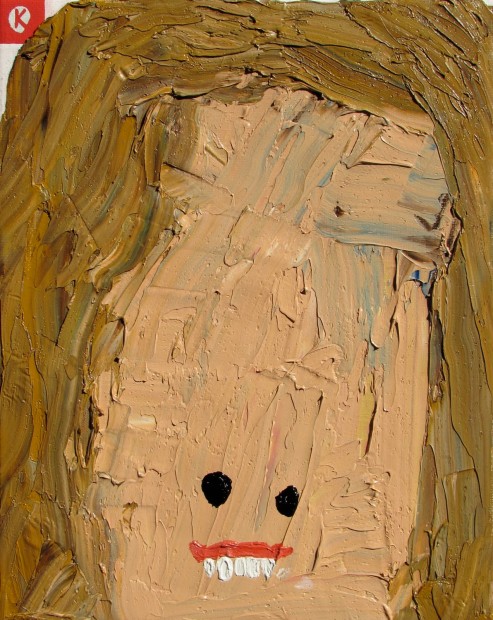 She was the most beautiful girl in the whole gas station 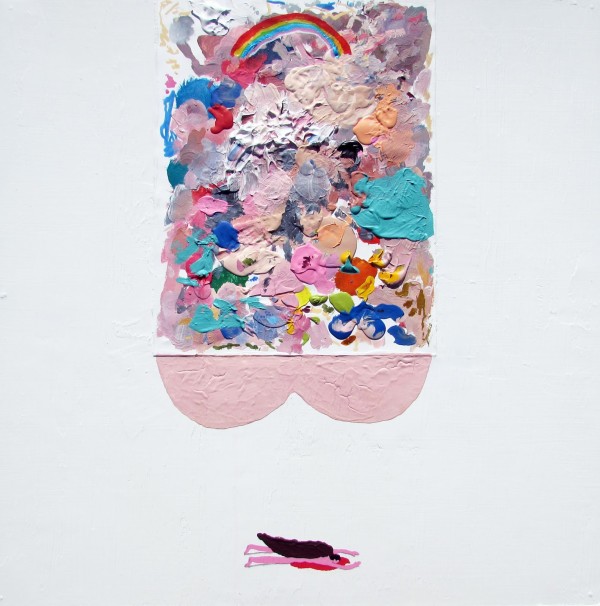 The gods dropped a hot one on my rotting corpse

It’s easy to get lost in Paulus’ irony and humor. And the deeper you get, the more you realize his world triggers almost masochistic tendencies in the viewer. Eight of the works in the show outright depict dead bodies. Often, these poor souls lie face down in a pool of blood—a small, sinister detail in an otherwise large and friendly landscape. Paintings also depict feces. In The gods dropped a hot one on my rotting corpse, death and poop are combined to create a celestial ass that defecates a human-sized turd onto a body below. While it is easy enough to laugh at the absurdity of this composition, it is much harder to come to terms with the fact that oftentimes in our own lives we feel like we have received a shit shower from the gods. 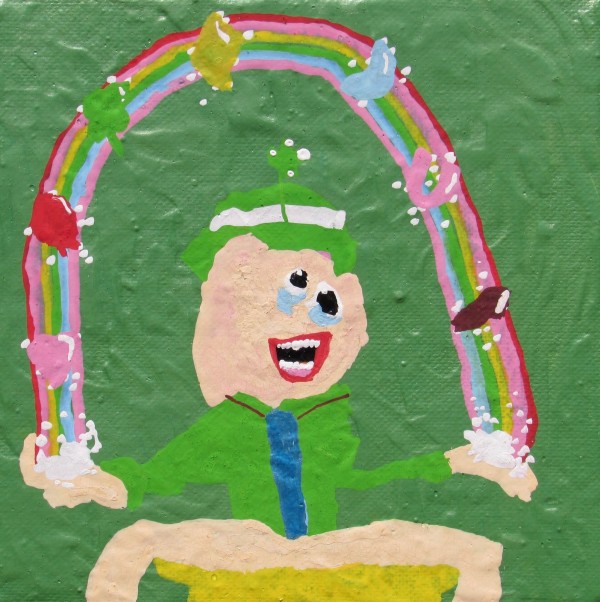 Perhaps the saddest piece in the show is A very lucky boy. In this small painting, a crying leprechaun is juggling seven colored pieces of shit. There is an inexplicable wretchedness to the work that comes from the figure’s large smile and the presence of a rainbow that feebly promises that all this poop juggling will never have to happen again. It is gloomily clear that the leprechaun is stuck in this abject, depressing cycle of life that the he (we) can’t escape, because we are sitting on a gold pot of squandered potential. We smile and we’re crying inside.

Part of Paulus’ success comes from his honesty. After taking time to wade through his visual metaphors, it’s clear he is simply stating things as they are: the reality show cluster-fuck of Honey Boo Boo causes all of the show’s characters to coagulate into a formless puddle; crappy hair clippers cause injuries and bad haircuts; and the pot of gold at the end of the rainbow isn’t all that it’s cracked up to be.

But, of course, c’est la vie. We plow through it all, soldier on and then bravely face (the show’s title) The Morning After.

Through July 3 at Ro2 Art, Dallas

Such a nice safe review. Everyone is nice, so careful. I suppose the review fits just right as we seek the social media “Like” and going viral rather than speaking our minds. Even replies have to be carefully ambiguous, like this one. Shucks. At least the titles for the paintings were not misspelled. That is as critical as I can be these days…