Fire in The Printing Museum! 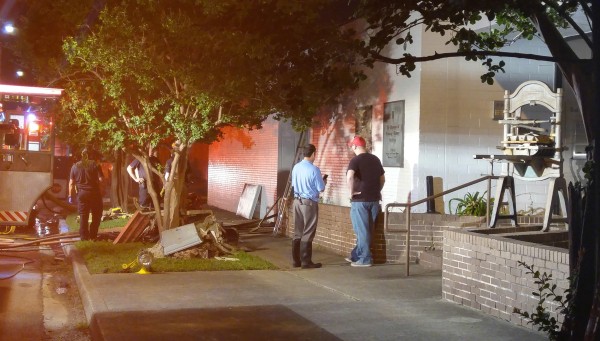 Image via The Printing Museum

This past week, a fire broke out at The Printing Museum (formerly The Museum of Printing History) in Houston. The damage to the building and the museum’s collection is definitely not as bad as it could’ve been.  The fire (suspected to be an electrical fire) was contained to a space the museum leases out to a local business, though some items from the museum’s library were damaged. To restore these books and papers, the museum called in Fort Worth-based restoration service Blackmon Mooring, who took the damaged objects away in a refrigerated truck and will treat them with an ozone process to slow the degradation caused by the fire. And local registrars and collections managers have been quick to step in and lend a hand, including professionals from the Houston Museum of Natural Science and the MFAH.

Although the majority of the museum went undamaged, the staff will make the best of a bad situation. They plan to box up the museum’s collection, move it to a temporary storage facility, and repaint and spruce up the building.

The Printing Museum is expected to be closed for three months. In the meantime, they will continue their public programming; the museum is looking for an alternative venue for their June 11th event The Montrose Print Market, a gathering of more than twenty independent printmakers and publishers. The museum also plans to host their summer book arts studio at an off-site space.

The Printing Museum to Close Current Location as...

The Printing Museum Is Listening

Glad to hear there wasnt worse damage. As an artist this is my biggest fear for my work.