Katrina Moorhead: The Stars and Us

by Betsy Huete May 3, 2016
FacebookTwitterEmail

Maybe it’s because the work is so elusive, or maybe it’s because of the poetic titles, but every time I experience a Katrina Moorhead show, I find myself trying to tease out a metaphor here or forge a connection there with some inscrutable riddle. But I think as a viewer it’s important to fight that impulse—not only because it will have you spinning in circles down a never-ending conceptual rabbit hole—but also because it is utterly beside the point. 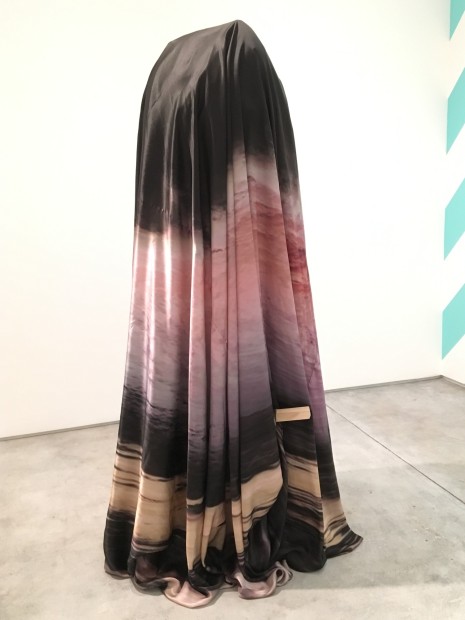 So what is the point? What is the most meaningful way to encounter work whose “meaning” is impenetrable? Moorhead is the only sculptor I can think of in Houston whose impeccable craftsmanship is less for the sake of good craftsmanship, and more in the service of creating an eerie sense of dislocation. Recurrent themes like disconnection from homeland and family, desire, nostalgia—themes that typically welcome sentimentality—in her work retain a kind of deadened intimacy and the cold incisiveness of an autopsy. It’s as if she unearths and offers every bit of herself, but with the impassive removal of a complete stranger. Human connection here seems impossible.

As morose as this sounds, it can also be really funny and self-deprecating, and Moorhead’s humor outflanks the inherent reserve in her work, infusing it with a human warmth. What’s more interesting is that the constant, ambiguous tension between cynicism and tenderness, or possibility and improbability, resides not so much within the sculptures individually, but in their relationship to each other and the space. The various pieces in The Stars and Us (all 2016) work best as an installation, when the works can most thoughtfully talk to each other and the walls. 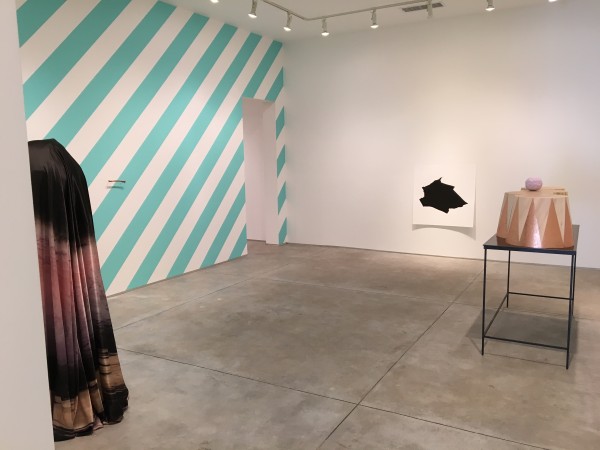 The Stars and Us, installation view, 2016

The most compelling conversation occurs between emeraldatlantic and Weak left hand. Emeraldatlantic stands at human height, a quiet confrontation near the gallery entrance. Cloaked in silk, the piece hovers like a ghost, covered in a printed wave and drenched in a sunset. Shrouded in what looks like a cheesy postcard, it looms solemnly as a truncated piece of wood peeks out from underneath and points us towards Weak left hand. Emeraldatlantic guides like a mute oracle, feeling at once ominous and ridiculous, harboring the kind of overwrought majesty that could plausibly exist in the back of a hidden cave, or be lodged at the bottom of a clearance bin.

Weak left hand dominates the room as diagonal turquoise lines barrelling down the wall like Martha Stewart wallpaper. The piece feels vaguely historical and museological, but also manufactured and commercialized, as if Daniel Buren got vertigo on the way back from Target. The small radius bone on display (perhaps a surrogate of her own?) reads like an artifact and an offering. Made of copper, the bone glistens luxuriously all while knowing its luxury consists of our lowest form of currency. But for all the eye-popping color and sheen, the most anthropomorphized part of the work are the slightly upturned nails holding the radius. Like tiny outstretched arms themselves, they generously offer us Moorhead’s arm while simultaneously implying we should never touch it. 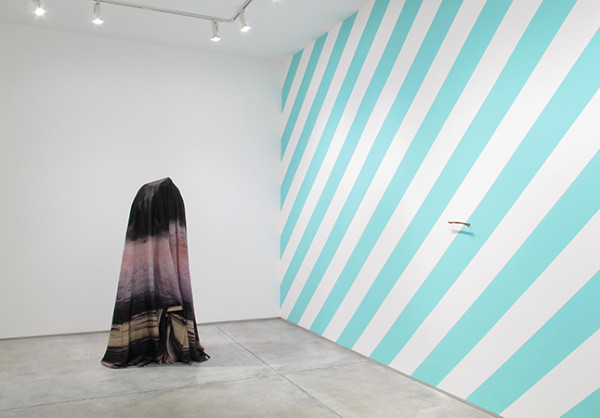 Low dun dark soused stands at an uncomfortable slightly lower than waist height: the kind of height in which we would expect a cannon to shoot a hole through the wall. Like the rest of the work in the show, Low dun dark soused tosses out a few clues. Sure, that the recreated hole references super-dark carbon nanotubes, that the shape somewhat resembles the geography of her home country, Northern Ireland, and that the other work in the exhibition references familial ties and even previous work are useful tidbits of information. But what feels more relevant here—more urgent, even—is how the velvety saturation of the deep, deep black can appear so all-encompassing and so vacuous at the same time. What feels more pertinent is how the paper flimsily curls off the wall, making our attraction to the blackness become all the more disorienting. 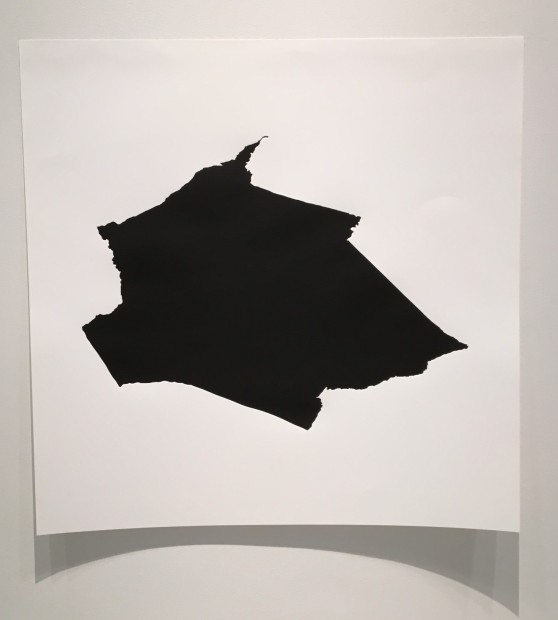 Out of the entire show, Landscape with four weathers feels the most unmoored. Yes, she deftly utilizes the kind of shifts in scale that communicate the ambivalence inherent in all of her work, but it also feels isolated from the other pieces and self-contained, and the magic of this show lies in the unexpected interactions that occur—playfulness and danger echoing in silent conversations we aren’t allowed to totally understand. 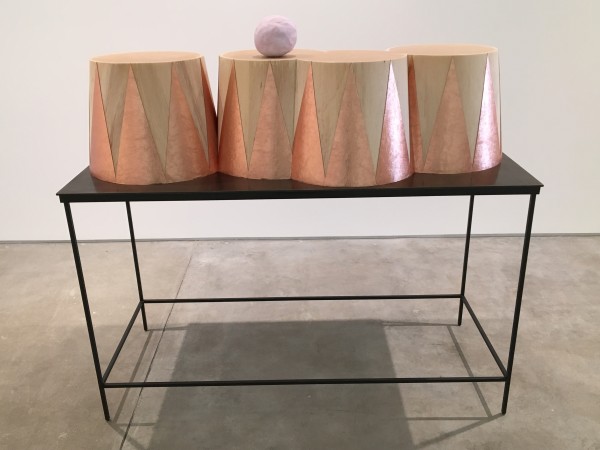 Every so often the air conditioner will cycle back on, making the silk in emeraldatlantic subtly billow along the floor. Silly and sepulchral, it comes to life like a mechanical doll. Was positing emeraldatlantic directly in line with the air vent a happy accident? Maybe. But given Moorhead’s relentless attention to detail, probably not.

This work looks absolutely wonderful; thank you for bringing it to my attention.