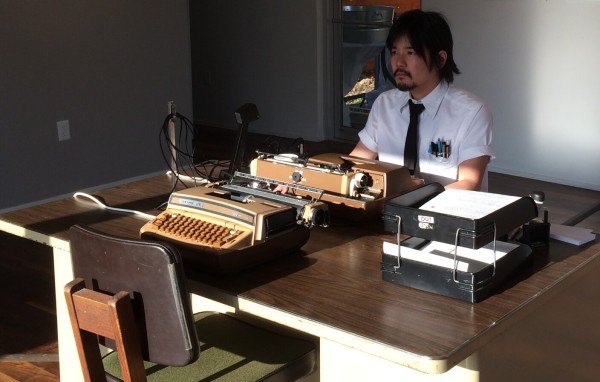 Mat Kubo preparing for a performance of “No Talking, Just Typing”

A recent transplant from San Antonio to Houston, Mat Kubo is a performance and installation artist who is known for interventions that focus on such topics as interpersonal relationships in the age of social media and the narratives that underlie common everyday objects. A creator of situations as artworks, Kubo usually takes a playful approach and bases many of his projects on formats that derive from popular games. In the spirit of Fluxus, he takes an “anything can happen” attitude, but is always optimistic that his social events can bring complete strangers a little closer together.

Miniature Monument to the Empire, 2006. 319 galvanized steel silhouettes of U.S. Army Stryker vehicle, 2 1/4 x 6 in. each, installed at various locations around the Hawaiian island of Oahu. Gallery installation at The Arts at Marks Garage, Honolulu featured steel sheets with cut-outs and photographic documentation.

Born and raised in Hawaii, Kubo received his BFA from the University of Hawaii, Honolulu in 2005 and, soon after graduation, embarked on one of his first interventions structured something like a game. In 2006, Kubo became concerned about Hawaii’s continuing role as a U.S. military outpost, and so Miniature Monuments to Empire was designed to call attention to the fact that Hawaii had just become the docking space for 319 Strykers, which are combat vehicles used for transporting troops or carrying armor and weapons for deployment in Iraq. To promote awareness of the increased militarization of his homeland, Kubo cut out 319 Stryker-shaped plaques from sheets of galvanized steel and adhered them to the ground at the same number of locations throughout the island of Oahu. Plotted out as tongue-in-cheek “safety zones” in a conceptual war game, the placement of the objects suggests the pre-game depositing of items to be discovered on a scavenger hunt. For an accompanying gallery installation at The Arts at Marks Garage, Honolulu, Kubo wall-mounted clustered-together photos of each of the plaque installations and, from the ceiling, suspended the steel sheets with the remaining mass of Stryker-shaped voids, thereby emphasizing the sheer number of them in a manner that recalls Chris Burden’s installation of suspended miniature submarines. 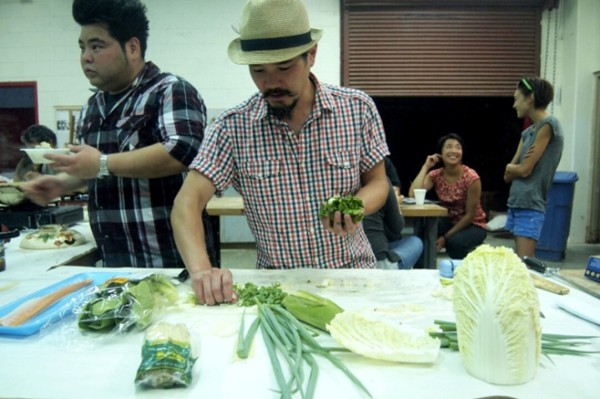 Cook for You, Cook for Me, 2008 (ongoing), photo from 2014 performance at the University of Hawaii at Mānoa

By 2008, Kubo began responding to the takeover of human relationships by social media, a topic that has become central to his developing oeuvre. Frustrated that his own interactions with others occurred mostly through MySpace, Twitter, Facebook, and email, Kubo presented the first of his recurring performances of Cook for You, Cook for Me, in which he prepares and serves a meal for participants. While paying homage to the Thai artist Rirkrit Tiravanija, who pioneered the practice of offering a meal as a performance art mechanism for building community, Kubo draws upon his own heritage by employing a traditional Japanese style of cooking known as nabe, in which a broth containing diced meats, fish, and vegetables is prepared in a single pot. Towards the end of the meal, Kubo presents a variation of nabe, known as zossui: a porridge made by adding rice to the remaining broth that has been simmering in the nabe pots and become fortified by its many ingredients. Zossui is for Kubo a metaphor for the conversations and good times that have transpired throughout the meal.

In 2009, Kubo left Hawaii to enter the graduate program at the University of Texas, San Antonio, where he earned his MFA in 2012. Almost immediately upon settling in San Antonio, he launched another ongoing project centered on the building of new relationships. At various malls around the city, Kubo approached people and invited them to pose with him for family portraits, explaining that he had no family in the area and needed stand-ins. Although the majority of mall-goers turned him down, those that accepted the invitation got to keep a print of their group portrait and, in some cases, received a free lunch. As has become his custom, Kubo relinquished control of much of the interactions to the participants, which included the photographers at the J.C. Penney portrait studios who directed and shot each portrait. Reminiscent of similar photographic investigations by Julie Moos, who is known for photographing school children that she arbitrarily paired into unlikely couples, or the Korean artist Nikki S. Lee, who disguised herself in order to infiltrate, live with, and photograph different subcultures such as drag queens, seniors, lesbians, and Latinos, Kubo’s photographs reveal the variety of reactions among the sitters, while also blurring the lines between reality and fiction. His larger objective, nevertheless, was to create new and memorable shared experiences for the participants, with the finished portraits as keepsakes. 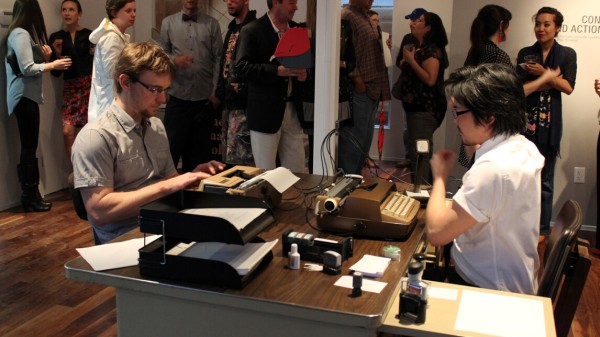 Of all his projects to date, Kubo’s No Talking, Just Typing raises the most questions about the detriments of social media. First performed in 2010 and most recently at the Houston Fine Art Fair, the performance adopts today’s common communications structure of non-verbal messaging, but here current technologies are subverted by using an archaic tool: the typewriter. As the title clearly spells out, participants are invited to sit in silence opposite Kubo, while the two type messages back and forth. Through the mere slowing down of the time it takes to create and send each message, the interactions can become more thoughtful than the quick and abbreviated responses that are transmitted today via smartphones. At the same time, the encounter is more personal than video conferencing, since it is physically real.  Moments of intimacy and bonding are allowed to reenter a shared encounter.

Kubo’s ability to create participatory experiences that are as entertaining as they are thoughtful is best exemplified by LiveActionExtravaganzaSuperGalaEventFunTimeHour!, which he presented at San Antonio’s Three Walls gallery in 2011. Inspired by the over-the-top nature of TV game shows in contemporary Japan, which tend to involve highly outrageous stunts, Kubo created his own variation, in which participants spin a game wheel in the manner of America’s Wheel of Fortune. Rather than being spun to determine a dollar value, Kubo’s wheel lists a number of live actions that he will perform, sometimes in collaboration with a player. These include knife throwing, karaoke, chain escapes, beer drinking, sandwich making, hugs, and staring contests. While Kubo advertised the event as an evening of “feats of skill, love, doom, joy, pain, and endurance,” it’s also playful model for community interactions and a salve from the increasing isolation and lack of personal contact in our digital age.

Kubo has also been developing a body of work that questions our relationships with objects. Already frustrated that many of the tools purchased for his art practice are used just once before being tossed out, Kubo began noticing returned items on hardware store shelves and conceived the idea for It’s All Going Back, a performance project that involves purchasing consumer objects, using them once while video recording the activity, carefully repackaging them with the recorded DVD thrown in, returning the items to the stores where purchased, and posting the video footage on YouTube.

While recalling the early practice of Jeffrey Vallance (who in the 1970s sent an insect collection to the Smithsonian Institution, where staff members responded by mounting and identifying the undamaged insects which they then returned to him) or Matthieu Laurette (who, in Shopping for Free from the early 2000s purchased items that had money-back guarantees but were non-returnable–such as toothpaste–complained about them, and got his money back), Kubo’s intention is simply to recycle the objects so that others can make good use of them. As the project evolved, Kubo found himself gravitating towards exotic items such as a karaoke player and a bubble machine, which he used together to create the performance Karaoke Bubble Bath (he sang to the machine’s music while taking a fully clothed bubble bath).

For his newest project, Kaeru (To Return Home), Kubo combines his interest in people with this fascination with objects. Influenced in part by the early performance works of Sophie Calle, such as her 1983 project that involved contacting people listed in a found address book and then creating a narrative about the book’s owner, Kubo has been imagining the histories underlying old record albums, books, and videos that he purchases from thrift stores. Of particular interest to Kubo are objects containing handwritten names and inscriptions, indicators that the item was once highly valued by its owner. For his recent exhibition of the first phase of Kaeru at San Antonio’s 3rd Space Gallery, Kubo exhibited the objects on a table, the way we might come across them at a flea market or garage sale. On the gallery walls, he mounted framed letters that he typed on a typewriter, addressed to each object’s presumed former owner. In each letter, the artist explains something about how he found the object and then ventures off on a variety of tangents. In writing about a videotape of the movie Star Trek: Insurrection, for example, he includes anecdotes about watching the original TV series with his mother when he was a child, and notes that he prefers the movie version to its televised predecessor. In writing about a classic Pat Boone album, Kubo segues into a lengthy discussion of Boone’s 1997 album of heavy metal covers, and implies that the crooner of gospel must have been inspired by the devil when he appeared in a leather jacket singing an Alice Cooper song on an Easter Seal telethon. At the end of each letter, Kubo offers to return the object to its original owner and notes that he hopes that they will enjoy it.

Soon Kubo will begin Phase 2 of Kaeru by mailing the letters to the presumed former owners, using addresses inscribed on the object or culled from telephone book white pages. As part of his continuing efforts to unite strangers or reunite people with their former possessions, Kubo demonstrates the true spirit of a Hawaiian “aloha,” as both a greeting and an expression of peace.

This artist made a woodcut portrait of my husband, unbeknownst to him, from his facebook profile picture, photographed by me! One of my husband’s coworkers saw it (and took a picture of it) at the Blue Star Gallery. Small world; don’t steal! I have attempted to contact him several times. Is this what they teach at these universities?