Houston Fine Art Fair Has New Owners and Will Go On 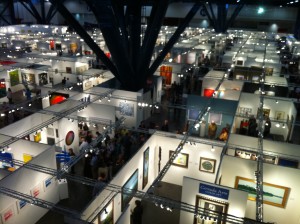 Just announced: The founder of the Houston Fine Art Fair, Rick Friedman, has sold his stake in the fair and in fact all of his art fair holdings–under the umbrella of Hampton Expo Group–to Urban Expositions, which is an event promoter/management company based in Georgia. Friedman’s Hampton Expo Group also operates art fairs in Aspen, the Hamptons and Palm Springs, and Urban Expositions’ purchase of it is that company’s first foray into art fairs. Up until now Urban Expositions has run fairs for other industries,  “from aviation to gaming and food service,” according to the Houston Chronicle.

The annual Houston Fine Art Fair, which which took place last weekend, has been shrinking of late. Houston art insiders have speculated that it should fold in with the city’s other major art fair, the Texas Contemporary Art Fair. Nonetheless, Urban Expositions claims that it’s ready to expand into the national art market, and that next year’s Houston Fine Art Fair is already slated for September 2016.

The early fair gets the worm: Houston Fine...

Urban Expositions purchased SOFA Chicago in 2013 (http://www.theartfaircompany.com/announcements/urban-expositions-acquires-sofa-chicago-from-the-art-fair-company). SOFA is not strictly an art fair, but Urban Expositions calls it one on their website.

I wonder what their business plan is. HFAF surely can’t have much brand value at this point. Aside from a mailing list, I wonder what assets it has that would be worth buying. I have serious doubts about Houston’s ability to sustain one art fair over the long haul, much less two.