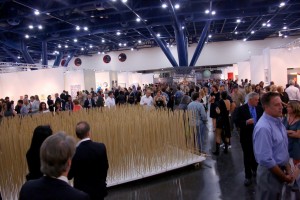 The Texas Contemporary Art Fair is now accepting applications for exhibitors for its 2014 show at Houston’s George R. Brown Convention Center. It may seem a bit early to worry about such things, except that they have moved up next year’s dates by over a month. Citing the regular mid-October dates as a busy time of year, the folks at Texas Contemporary are sure that the new dates (September 4-7) will be more convenient for galleries, collectors and attendees.

Of course, it probably doesn’t hurt that the Texas Contemporary will now get a two-week jump on the Houston Fine Art Fair. (For more on the sibling rivalry that has existed between the fairs from the get-go in their very short Houston histories, read Kelly Klaasmeyer’s Glasstire article in which she asked, “Why can’t we all just get along?”) During this year’s fair, Culturemap’s Tyler Rudick noted that the Texas Contemporary “appears to be settling into its own role as the hipper cousin to the HFAF’s respected stable of high-end international galleries.” Maybe Rudick hasn’t watched enough soaps to know that the loveable, laid-back, second-in-line-to-the-family-fortune always makes a surprise move of ambition by the end of the season.