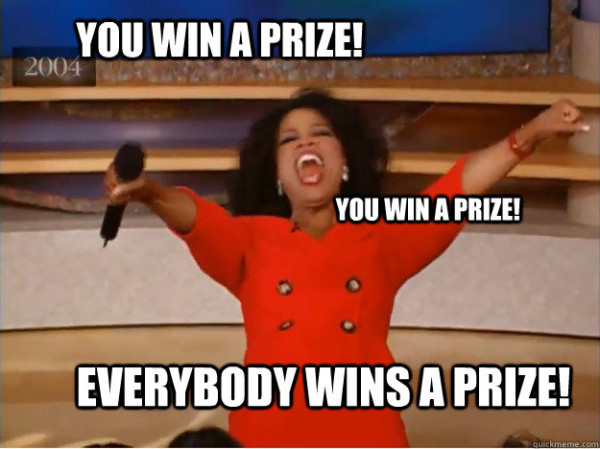 Last night, the Lawndale Art Center’s Big Show opened, which is normally when the winners of the show, selected by the guest juror, are announced. However this year’s guest juror, George Scheer, opted not to pick winners, but to to divide the $3,000 in cash awards amongst all 62 participating artists, meaning each artist in this year’s Big Show will take home $48.37.

No word yet on whether every artist will also get a trophy.

This speaks to the strong and the weak in our art community. It is great that we can have such support, but it is counterproductive to celebrate “everything”. This profession is not t-ball, everyone should not get a chance to bat. That gives the overall public the perception that anyone can be a professional artist, so why give them a real wage…”it’s all about expressing yourself and getting exposure”.

Congrats to all the winners, but let’s agree that we can still be “folksy” Texan’s and not celebrate mediocrity.

Deabbie, the Big Show is not limited to professional artists. I’m suspect that many of the amateurs who entered and were judged worthy of inclusion were fine with getting their $48 bucks.

Is it really about trying to celebrate everything or is it just a juror trying to be cute? What a missed opportunity for a nice little windfall for a few artists.

It was listed as a juried show with a certain award. The artists entered put forth
effort and had the expectation that all artists have who go to the trouble of entering. Changing the tradition and expectations after the fact sounds unjust. That the committee would bend to the whims of one man or succumb to an unusual moment of clouded thinking seems underhanded.
I feel it this outcome lacks integrity.
B.Shaw