Lawndale’s annual and much-anticipated Big Show opens tonight (Friday the 13th) from 6:30 – 8:30. Curated by Marco Antonini, gallery director of Brooklyn’s NURTUREart, it’s one of the smallest and sparest Big Shows in memory and that’s not a bad thing at all. As artist Elaine Bradford sagely observed at last night’s preview, “It looks like a real show instead of The Big Show.”

Here are some of the highlights… 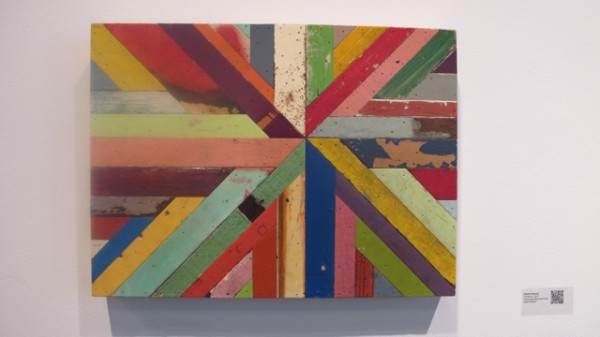 I saw gallerist Barbara Davis and Texas über-curator Clint Willour at the preview and asked them to name their favorites. Both pointed to Patrick Renner‘s work.

Willour had some other favorites as well: 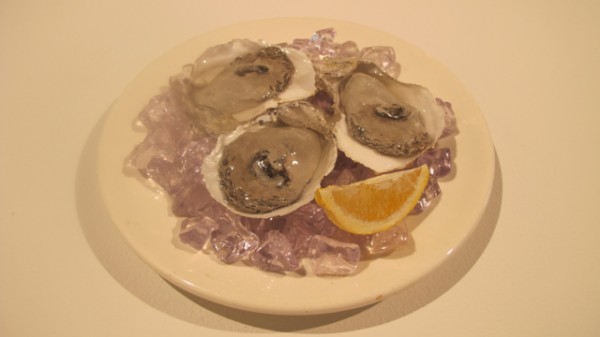 Henri Gadbois is an 82-years-old and a painter  who showed at Houston’s long lost DuBose Gallery. He now makes fake food for stuff like the Bayou Bend yuletide display. I love that this is in The Big Show. Gadbois is like the Duane Hanson of food. 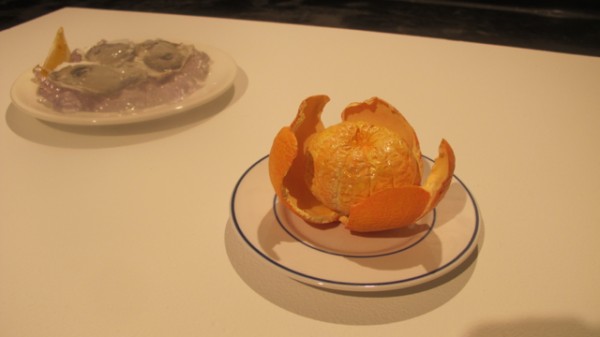 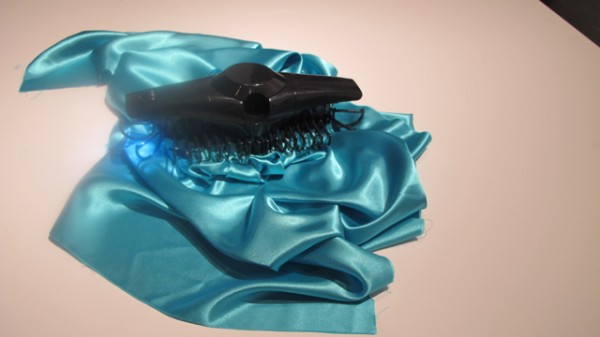 It took me a bit to figure out that the creepy crawling thing in Katie Wynne’s sculpture was a rotating tie rack. At first it looked like one of those motorized toys the mall kiosk guys are always demonstrating. The piece is simple, elegant and unsettling. 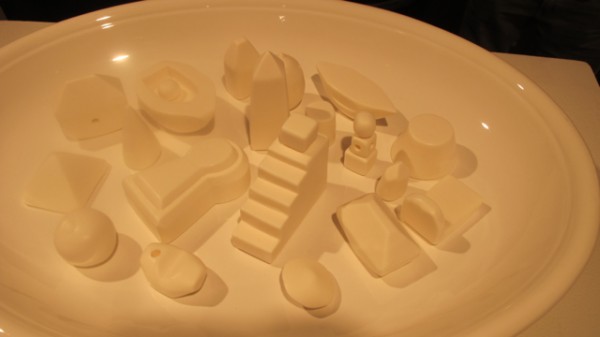 Aside from being selectively lean, this Big Show doesn’t betray any obvious curatorial prejudices. Antonini chose a wide range of interesting stuff.  Although soap as a material did appear more than once…. 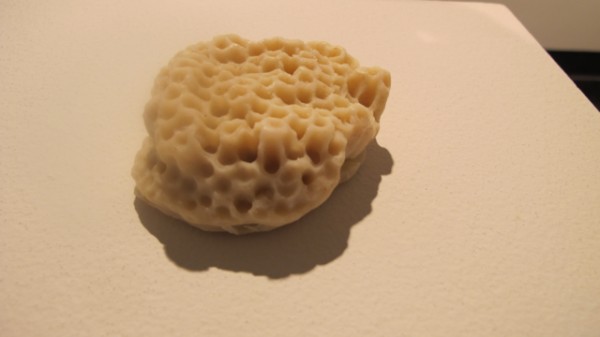 Julie Lundgren & Wyatt John Little’s cast Hornet Soap is a lovely little object that would be equally at home in an art gallery or on Etsy. Doesn’t all of this soap stuff make you want to take a knife to a bar of Ivory? 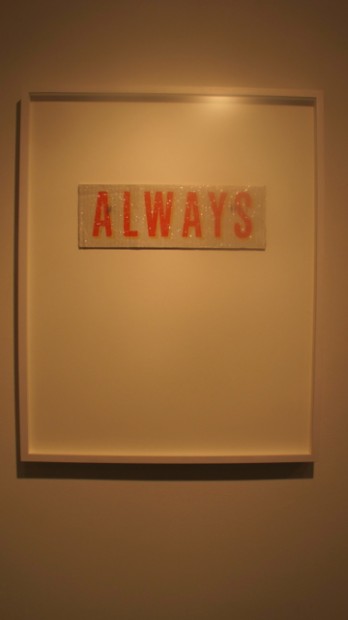 Kassandra Bergman‘s  Always manages a little found object poetry with a piece of cardboard box and some frosty glitter.

I just realized while posting that the following two works are both by Donna E. Perkins. 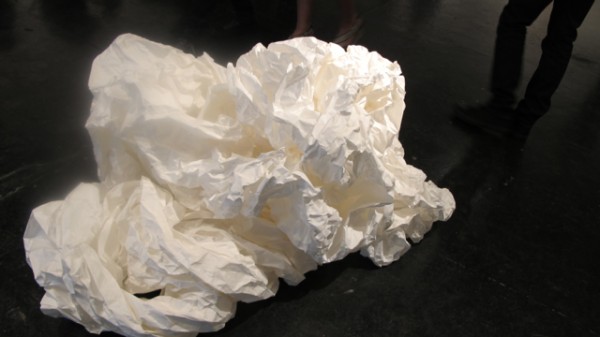 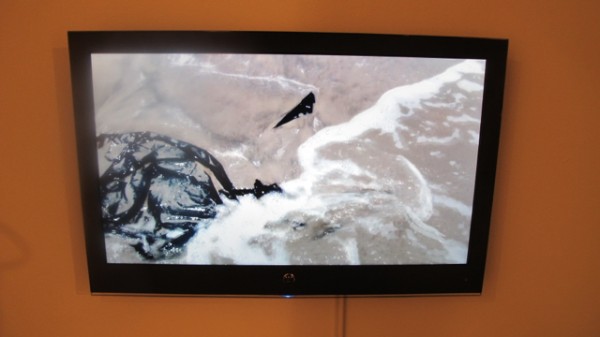 I really liked Perkin’s big crumpled paper floor sculpture, WS2; VO6.12 Long and Short. I think the paper is stiffened with glue or something. It’s surprisingly beautiful and baroque. All it needs is St. Theresa. Meanwhile Perkin’s video Beached Bag, Galveston creates a hypnotic beauty from the surf and a piece of fabric. It’s another nice use of unassuming material but another terrible title. Sometimes the old standby “Untitled” is best… 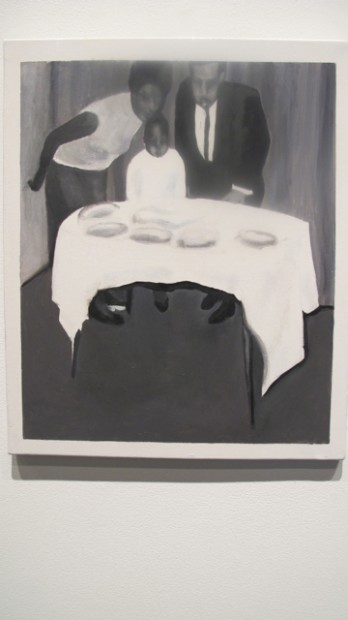 Sunshieva’s Faded Photo II is one of the stronger paintings. It’s a little Marlene Dumas meets Luc Tuymans and I like it. (It’s not quite as blurred as my photograph of it – the kids got some crap on my lens, hence the “soft focus” section in all my photos. Apologies, artists.)

There are a couple other paintings in the show that channel some other, this time Houston, artists. Group shows like this are an interesting way to gauge the influence of particular artists and see it percolating through the Houston art community. 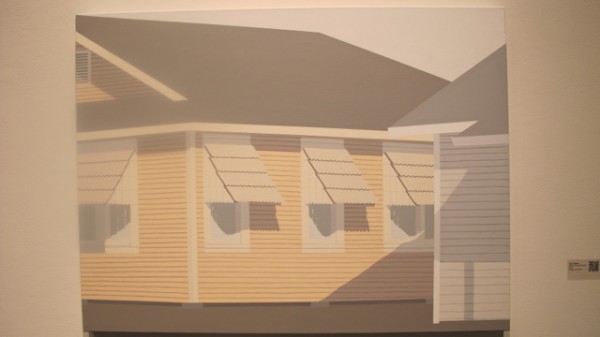 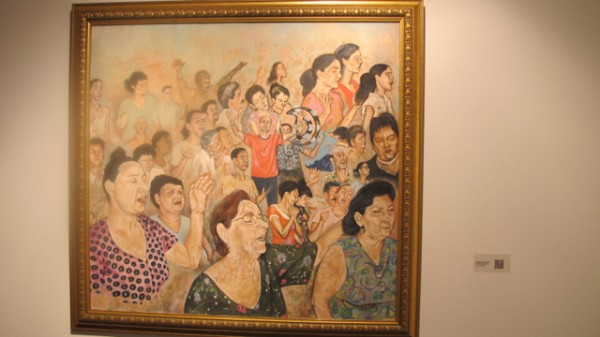 The 2012 Big Show has a lot of strong work and it’s well worth seeing. Yeah, there’s some goofy stuff as well but that’s the nature of big juried exhibitions…

Lawndale’s Big Show: call for entries, and a...

Love the look of the show, maybe i’ll visit. .ORG

Finding anything that would hold my attention is not possible in this show. The curator probably tossed the names toward a circle and the ones that got in, got in. Perhaps these were the best entered since the majority of established old timers do not enter. We do not like rejection even though we should by now be used to it. I will give it a try next year. Except…What’s not to like about Henri Gadbois and Liza Littlefield.

I could hear the distant laughter and water-screams of children in Donna E. Perkins “Beached Bag”. It made the video live. It gave me that dizzy senstaion of how water and sand shifts. It made me feel the mystery of how it was the first time I went to the beach and everything moved while I stood still looking. St. Theresa

Isn’t our own Henri Gadbois the best? I will follow him anywhere. Wonderful that he is included in the show.

Great pieces Donna. Will definately go to view your video.
Show looks “together” and I can see why so many of we painters did not get accepted.

Renner’s piece stood out for sure, but who cares what Barbara D says?

It looks like it is worth a trip to Houston some day soon.

“Yeah, there’s some goofy stuff as well but that’s the nature of big juried exhibitions…”

Yep, takes a real pro to come up with profound shit like that…