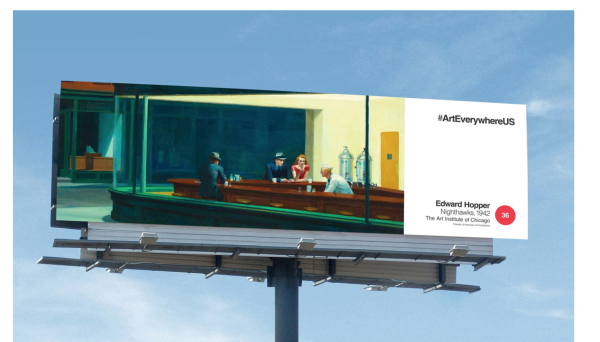 We’re closing in on the opening day of Art Everywhere, the nation-wide public art initiative (modeled after a successful UK program of the same name) that will put the images of 58 beloved American works of art on billboards, the sides of public transit, newsstands, telephone kiosks, and other highly visible commuter spots across the nation—tens of thousands of spots, in fact. On August 4, the directors of the five American museums that participated in the program by supplying the available works will converge on Times Square in New York to kick off the event. Among them is Maxwell Anderson, director of the Dallas Musuem of Art. Other participating museums can be found here.

Over the spring, 170,000 votes came in from the public to narrow down the original pool of 100 images dating from before the American Revolution, through the Civil War era and both World Wars, the Great Depression and the Dust Bowl, right up to this decade. Beside the museums, other entities had to cooperate to make all this possible, including the Outdoor Advertising Association of America (OAAA), plus foundations, estates, and in some cases the artists themselves. The display will run for a month. Of the winning 50 images, the originals of the ten works belonging to the DMA are currently on exhibition at the DMA throughout its building, which is free and open to the public. A list of those works is here. (They’re all great; go view the real McCoys, DFW!)