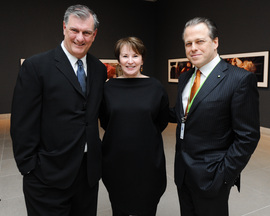 Maxwell Anderson, the director of the Dallas Museum of Art, and Dallas Mayor Mike Rawlings have announced that Dallas will be the site of the 2014 New Cities Summit, and will launch the Global Cultural Districts Network (GCND), an international consortium and think-tank of cultural districts in large cities. Anderson and Rawlings, who are both in Brazil for the New Cities Summit, made the double announcement today.

John Rossant, Chairman of the New Cities Foundation and the Co-Chairman of the new GCDN, said, “Today, we are witnessing an unprecedented growth in the cultural landscape of cities, from Hong Kong to New York, São Paulo to Qatar. By teaming up with the Dallas Arts District … we aim to help those responsible for planning and leading cultural districts around the world.”

Anderson and Rawlings have already shown how well they work together and may have gained some international cool points when they co-starred in “Downtown Artsy,” a promotional video about the DMA’s new free admission policy, which premiered in April at the Museum’s Art Ball fundraiser. Pretty much the Dallas equivalent of the Olympics’ opening ceremony’s James Bond/Queen Elizabeth helicopter jump, the spoof included some insider Texas jokes and art jokes and featured several of the museum’s major patrons, including 101-year old Margaret McDermott, widow of the founder of Texas Instruments, playing a similar role to Downton Abbey’s dowager countess.

The new Global Cultural Districts Network sounds both ambitious and vague, but perhaps the pronouncement of “Eagle” (played by Texas car dealer John Eagle) in “Downtown Artsy” will come to pass: “When our Lord Anderson puts his mind to something, it will come to be.”