One of the most famously weird stories in art history is the tale of Vincent van Gogh’s 1888 psychotic episode during which he chopped off his own ear and presented to a prostitute. Or, as some art historians have more recently posited, got it sliced off by Paul Gauguin’s sword during an argument and lied about the incident to keep his friend out of jail. Whatever—it’s a still a weird story. 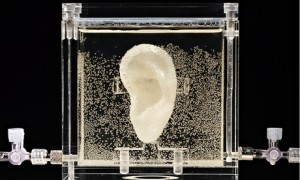 This might be weirder. A German museum is now displaying a “copy” of Van Gogh’s ear grown from living cell samples provided by Lieuwe van Gogh, the great-great-grandson of Vincent’s brother Theo (making it contain one sixteenth of the same genes as Vincent), reports Salon.com.

The US-based artist Diemut Strebe, who states that “crossover between science and art has increasingly become the main focus in my work,” said the ear, which was grown at Boston’s Brigham and Women’s Hospital, is being kept alive inside a case containing a nourishing liquid and could theoretically last for years. A 3-D printer was used to shape the material to resemble Van Gogh’s ear.

Strebe plans to display the ear in New York next year.