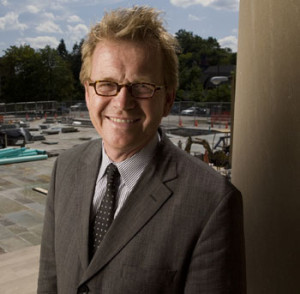 In a step towards the realization of its master plan for a “neighborhood of art,” the Menil Collection has appointed landscape architect Michael Van Valkenburgh to enhance and expand the 30-acre campus in Houston.

The master site plan, by David Chipperfield Architects, calls for the creation of additional green space, new visitor amenities (including a café), and new buildings for art. Site preparation for the outdoor component of the design is expected to begin in September.

Van Valkenburgh’s first project will be reworking the Menil’s West Alabama Street parking lot. “We’re trying to make a beautiful parking lot. That sounds like an oxymoron, like trying to create a beautiful landfill,” he said in a Houston Chronicle article. “But there will be more trees, so it’s more comfortable when it’s hot.” Van Valkenburgh also plans to direct and reuse the lot’s storm water, reorient parking spaces, enhance pedestrian safety, improve the lighting and provide spaces for bikes.

Expanded green space will also give the Menil more room to display outdoor sculpture, explains Menil Director Josef Helfenstein. “We have two important Tony Smith pieces that are not on view now because we don’t have a place to put them.”

Van Valkenburgh is working closely with Johnston Marklee, the architects of the soon-to-be-built Menil Drawing Institute, as well as another firm that may design a cafe to be integrated with the bookstore. Projects by Van Valkenburgh’s firm include the redesign of Pennsylvania Avenue at the White House, Brooklyn Bridge Park and Hudson River Park in New York City and the Isabella Stewart Gardner Museum in Boston.