by Bill Davenport May 7, 2013
FacebookTwitterEmail 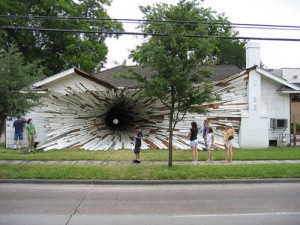 Dean Ruck and Dan Havel’s popular 2005 architectural intervention, Inversion, has been pirated by admakers for Honda, according to a lawsuit the Houston artists filed last week. The ad, titled “Leap” shows a man driving a new Honda CR-V thorugh a magical portal that opens in a wooden house, inspired by the artist’s transformation of the Houston Art League’s old buildings on Montrose Blvd. Although the ad’s producers, UK-based Rogue Productions, cleared the project with the Houston artists last year, Havel and Ruck, seeing the literalness of the ad’s reproduction of their idea, are suing for more compensation.

Let’s hope Patrick Renner, the sculptor currently building “Funnel Tunnel”, an Inversion-inspired public art piece near the site of the original, has got his permissions in writing!

I have went on and on on facebook about how graphic designers in the corporate sector are always STEALING from artists. I am happy that they have filed. They will win. Please keep us posted. This angers me.

artists also steal from graphic designers all the time too. How many artist collages and paintings have magazines and cultural marketing artifacts or references in their work…MANY! its a too way street…

what does “too” way street mean?

This sort of thing is all too common. I think contemporary culture has lived for a while now with a dull expectation that nothing is original, that there are no new ideas, and that everyone in any creative field is free to just take whatever is “out there”. Advertising is particularly full of annoyingly derivative stuff. It’s built into the business, and finding something already familiar and clever to tweak and exploit by associating a product in context is standard behaviour. While I don’t know the terms of Dan and Dean’s original arrangement with Honda, I hope they win because they are original, and Honda’s ad agency is not. Decent royalties or a substantial lump sum should be in order. I’m sure the artists are aware that they are facing a small army of well-paid attorneys kept on retainer for this sort of thing. I hope they have a strong case and that it is settled fairly and quickly.
I have some experience with guilt-free imitators, having watched Wim Delvoye launch a small career based upon tattooed pigs. I tattooed a pig in 1975, having done the project in grad school. I did another in 1984. Delvoye saw pictures of the one from 1984 on a postcard published internationally and started his own little factory, employing teams in China to churn out dozens of tattooed pigs, killing and stuffing them for the art market. I objected to it years ago, and he basically said “fuck you”. While it may be true that one cannot copyright an idea, it’s a point of pride for me to never slavishly rip off somebody else. Some people apparently disagree and have no trouble “appropriating” others’ work for their own benefit.
Good luck to Havel and Ruck.

Advertising creatives are a special kind of weasel. They scan the internet for interesting gags and struggling artist’s visual trickery and its their puny creativity that spins those living creations into an advertising context. BOOM their presentation can be finished by 5 and they can go on vacation in Bermuda for the weekend…

As I see it, there’s no “point of honor” involved at all, just a point of money. Artists, graphic designers, and TV admen should feel free to steal ideas and images from each other whenever they need to, but when they use those ideas to make money, they need to acknowledge their sources and give them a fair share.

If there was a simple, uniform way to divide revenue among creative contributors, we would all be richer: using the courts to decide these issues is VERY expensive, and everyone loses.

If Ruck and Havel had been hired to create the image that Rogue Production House used, what would they have been paid? What would their royalties look like? (Professionals chime in here!) We need a court case to figure this out and make them pay up? There must be a better way.

Wish in one hand, Bill. What else is expensive? Flood control? Given what has been reported of the story, Rouge acted roguishly, on paper. I’d be surprised to see a trial come of this. Everyone wins. Future asshats are dissuaded. What’s peculiar is how bad the advert is and how easily an alternative riff of vortexiness can be imagined. There’s no explicable reason for the original double-dealing. Maybe Rouge is staffed by Roombas?

While “More Money” is accurate, you make H&R sound like greedy whiners. Other reports on the case show that they weren’t paid in the first place, but were consulted beforehand.

You’re kidding me, right? EVERYTHING IS DERIVATIVE. There are no completely new ideas. Ever. Every artist, every designer, every engineer, ever architect–EVERY ONE–studied what come before them and copied it and borrowed bits and pieces from it to come up with their own whatever.
Thesis. Antithesis. Synthesis. It is as old as time and the guy who happened to synthesize the most recent iteration isn’t owed anything by anyone… unless he’s prepared to split that payment up between every single person who has come before him, whose ideas and creations his ideas and creations are founded on.
If I copy your “thing” EXACTLY, without any changes whatsoever, and then I re-sell it to someone else as my own original work–that’s a bit different. But if I create something even slightly different, then it is a completely separate thing. Drug companies do it every day to extend their patents. They take a successful drug whose patent is about to expire and they change one molecule and call it a new drug and file for a new patent.

Bill’s remark about money is a more accurate refinement of the problem, since it addresses something tangible rather than academic or rhetorical. And yes, we all learn from the past, but there is a core issue regarding originality that forms the basis of copyright law. Granted the basis is often vague, especially within the context of recent events and recent technology. There are many examples in case law…Prince v. Cariou being the most recent I can think of. And…patents are interpreted differently from copyrights, but both are evaluated in the end by money. If a lawyer can’t smell money in the issue, he won’t bother to pick up the phone.

Summer’s Eve “nothing is original.”

Why do business people shower so much contempt on artists’ rights.

Dan is my brother and they were not paid for the idea, It was just a fairly general phone calls. The scene for. Inside the house as the car comes through is the pictures my brother took

I represent Dan. I went back to England for my Mother’s funeral last October and her obituary was opposite a print ad for Honda. My first reaction was how the heck did a picture of Inversion get printed in my local paper, it was that closely copied. Imagine the corporate wrath of Honda or Rogue if you lifted one of it’s ideas wholesale for profit.

Honda representatives did call Havel Ruck Projects to ask if they mind if an image of a portal was used in their ad in order to cover their tracks. The visual examples given showed multiple artists images using portals which looked nothing like Inversion. Havel Ruck’s responded, “we don’t have copyright on images of portals.” Honda’s samples did not include Inversion, had it Havel Ruck may have responded differently. Portal images are very broad and diverse. This was well after the fact that the design team had incorporated the Inversion image in their ad and created a video based on it. If the design team had asked Havel Ruck to help in the creation of the ad, Havel Ruck would have most likely said yes for a fraction of the cost of the law suite. It’s the principle behind it all. The image has been used without permission in two other occasions, with no compensation.

When the big boy tries to steal the kids lunch you bet it is an issue because the bully collects cash. Just like in war, he gets there first with more, and ethics be damned.
And there is an original even if there is nothing existing an entirely separate entity . Every time you, an individual unique at this place in time, just like every other sentient being- unique- does something, it is being done by you and only you, within the context of each of us as there is no one else exactly like us doing whatever it is we do.
Ask yourself just what idea, meaning or value your work as an artist has, what is the motivation, and there is what it is worth. It doesn’t translate into cash more often than not , but that is a point well outside the understanding of an industrial company running off multiple millions of not so unique mechanical objects, each one a replica designed to make money.
So Havel and Ruck must speak that language to them because there is no other way to communicate.
Good luck Gentlemen.