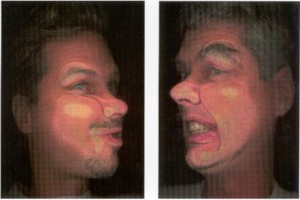 In celebration of the new year, their 30th in partnership, Houston’s Art Guys have planned a busy, performance-a-month schedule for 2013. Centered around the city as canvas and their collaborative history on it, many of the promised “12 Events” combine typical Art Guys geography lessons and endurance trials: crossing and re-crossing a busy intersection all day (September)  walking 29 miles of Little York, the longest street in Houston (February), orbiting the 610 loop for 24 hours (November), and moving things from one cardinal point of the compass to another (March).

Other events are reiterations of the Art Guys’ fame, which, from its ironic beginnings thirty years ago, has begun to assume a surprising semblance of reality! In January, they will signing their names all day, shake hands with passersby in June, and tell jokes for eight hours straight in July. In December, they reprise their original collaborative vows, agreeing on painting (again), this time atop cherry-pickers!

The calendar also includes a couple of more socio-politically pointed works: The Art Guys will construct portable fences around themselves and wander through downtown Houston in August and propose new ordinances at city hall in October; but the 12 events schedule seems cautious to avoid touchy issues that have mired the duo’s genial conceptualism in distracting, unintended controversies over the past couple years.

2013, The year of the Art Guys, is rounded out with a foray into avant-garde music as they orchestrate ship channel sounds in April, and the loose ends are taken care of in May with some pure silliness: unravelling a spool of under-used string and then rolling it back up.