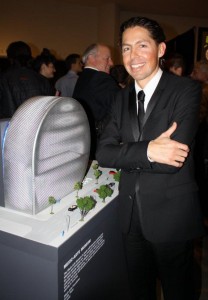 Fernando Romero with Mexic-Arte Museum maquette at the Guggenheim.

The proposed big wheel/Aztec calendar design for a new Mexic-Arte Museum building on congress Ave. in Austin by Fernando Romero was part of the architect’s “You are the Context” exhibition and book launch held at the Guggenheim Museum on Dec. 12. Though widely criticised as stereotypically ethnic (with the Aztec calendar projection), too expensive, or just ugly, the dramatic design has important friends in both Austin and New York: Mexic-Arte Museum board Members and staff attended the event, including: Dr. John Hogg, President of the Board, David Garza, Facilities Committee Member; Dr. Frank Cardenas, Advisory Committee Member and Mexic-Arte founding director Sylvia Orozco. The design is included in Romero’s new book.

Back in May 2012, when Jeanne Clair Van Ryzin first reported on the new design in the Austin American Statesman, she noted that the commission to design the new museum was awarded to Romero (son-in-law of Mexican billionaire Carlos Slim) without a competition. Although Van Ryzin also noted to gloomy history of failures to raise money for stand-alone museums in downtown Austin, the plan was that the new $30 million project would be paid for with $15 million in city bond money, $6 million in federal New Market Tax Credits for under-served communities, $2.5 million from the U.S. Department of Commerce’s Economic Development Administration and a $6.5 million capital campaign.

I’m all for it: when Mexic-Arte vacates the impractical building, it will be a natural for the new Glasstire (Glass Tire-get it?) headquarters, and just down the road from the State Capitol! 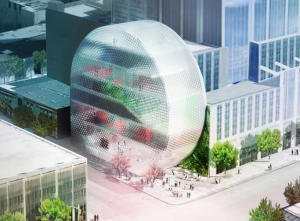