by Leslie Moody Castro May 30, 2012
FacebookTwitterEmail 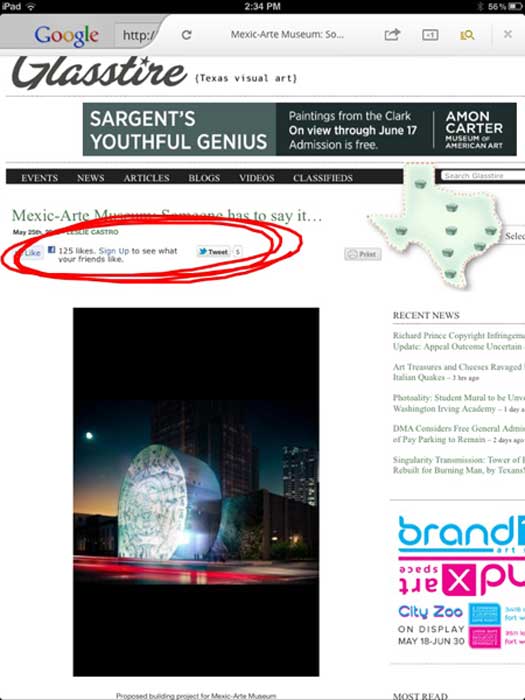 I talk about Mexic-Arte Museum a lot and I always have.  I have a long history with the institution, and I will say again that I want them to succeed and always have, and this is part of the reason I have been so vocal about their decisions.  I will also say that nothing I wrote in my previous post isn’t anything I haven’t said before.  However, in recent months my conversations with people have struck a nerve with me.  More often than not I’m told that the museum, “just isn’t on their radar,” or that they simply, “don’t pay attention because the institution isn’t relevant.”  Judging from the level of response to my criticisms of the Mexic-Arte, people are paying attention to the museum and  are  invested in it’s future. Somehow the community seems to be on the same page without even talking about it.

In addition to the posted comments, I’ve received an number of personal messages about the museum. They have raised additional concerns like about the functionality of the building itself. People have agreed that they don’t identify with the museum and its mission and are concerned that the museum tries to represent too much within its scope of being the Mexican/Mexican-American/Latino visual arts center of Austin, and in the end misses the mark so much that it simply isolates its audience.  People have told me that they want to be challenged at Mexic-Arte, that the institution’s historical exhibitions have been great, but they are repeated over, and over, and over…ultimately the only exhibition of note that is all inclusive, reaches a broad public, and is groundbreaking is the annual Young Latino Artists exhibition.  No one has discredited the work and vision of the institution, but everyone wants to see it become a place that is relevant, groundbreaking and inspirational for the community.  It’s really time that the institution strengthen its focus, not complicate it more with a confusing building.

It’s a sad day when an institution has to be criticized so harshly.  But clearly the criticism struck a chord with a larger public similarly frustrated with the institution.

I also want them to do their research.  There are numerous successful models that the museum could look to: Museo Arte Popular in Mexico City, The Craft and Folk Art Museum in Los Angeles, The National Museum of Mexican Art in Chicago.  These are three historical museums off the top of my head that shake things up in their programming, stay true to their community, and represent different facets of the culture they choose to exhibit.  Or look in your own backyard.  Most of us have learned in the past few years that making the physical entrance to the museum as obvious as possible is the first and most important step in “new building 101.”  If people can’t find the door they won’t feel comfortable coming in.

On another note, I also have to address some concerns that arose after the post was published.  The original piece was not the product of an angry blogger.  The piece was sitting in my head for over a month as I spoke with a variety of people about Mexic-Arte and its decisions.  Those people include non-art people as well as those who are extremely art savvy.  I also approached Mexicans and non-Mexicans alike.  Additionally, I circulated my criticism to a select few before publishing it on Glasstire.  I also need to point out that Glasstire did not ask me for my opinion, or to write this piece.  It’s all me.  The timing of its publication is also unfortunate.  I have to acknowledge the incredible accomplishment of the exhibition Thought Cloud being recognized by the Austin Critic’s Table.  That’s not an easy feat, the recognition is well deserved.

Now, that the conversation has been started.  Personally, I want to know more people’s thoughts on how we can all move forward to help Mexic-Arte succeed.  Clearly a lot us feel invested in the future of the institution in some way.  Please share your thoughts, let’s keep this conversation going…

I didn’t think it was an unexpected nerve whatsoever. I’ve had a lot of people start conversations with me and forward me articles about the museum. People are interested and don’t understand why the museum can’t move in a more positive direction.
Aside from whatever issues of clarity there may or may not be within the institution, funding is such a HUGE issue. As far as I know the museum has no endowment, which definitely limits what they are able to do and offer, and leaves them at the mercy of grants stipulations. Instability in funding leads to instability across the entire institution. People, and institutions alike, panic when they don’t know where their next meal or paycheck is coming from.
I’m certainly not saying that I know how to raise an endowment, but people that did know used to work at the museum and they were canned. Bad move. I find it likely that friends of the museum would be happy to contribute a one-time gift rather than be nickle & dimed consistently over the years.
The museum has an attrition rate that is phenomenal and offensive. The attrition is due both to the mismanagement of funds that necessitates the laying off of staff, and due to the complex problem of attracting a quality staff that will stick around when they are practically paid in salt and promises, and sometimes not even in that.
Also, who is at the helm of this ghost ship? Is it the board, the staff, Ms. Orozco? Is anyone at the helm at all? Perhaps the problems this museum faces, in addition to the cash issue, are due to lack of organization and bad decision making. Organized institutions that merit good decision making instead of egotistical power struggles rarely fail in such an epic manner.
A recent article, Jeanne Claire Ryzin http://www.statesman.com/news/local/mexic-arte-seeking-10-million-from-city-for-2331984.html pussyfooted around a lot of these issues. I’m glad the time of pussyfooting is over. Does this museum’s success require a coup d’etat? A lot of people are offering criticisms of the museum, but no ideas about how to fix it.
Maybe it needs a philanthropic kick-starter, new staff, a new leader, a new board. Maybe all of the above. I’m curious why, if the museum was awarded $26 million in 2006 as outlined in Ryzin’s article (scroll to bottom), there isn’t a damned building already.
But, of course, as others have offered…the caveat to any of this is being able to look past the mistakes and missteps of the last years and move forward. God, this sounds like politics. Maybe that’s the problem.

I would like to see a younger generation, even if its one person, on the board at MexicArte. And if that shall ever happen, you would better believe, I would apply! Thank you again, Leslie for sharing these thoughts in trying to push us in openly discussing our concerns for our community and the artists and educators that build them.