by Bill Davenport May 1, 2012
FacebookTwitterEmail

John Hogg and the Mexic-Arte museum board are hoping to build an “iconic” new building for the museum at Congress and Fifth St. in downtown Austin, and want the city to help pay for it with a $10 million bond issue. The new building’s disk-shaped facade by architect Fernando Romero is said to reference the Aztec Calendar, but could as easily be a big tire.

The big tire will cost and estimated $30 million; Jeanne Clair Van Ryzin in the Austin American Statesman has a breakdown of the various public and private sources the Mexic-Arte board hopes to tap for the construction, as well as a thought-provoking background on Romero, son in law of Carlos Slim, and designer of the Mexican billionaire’s personal museum, who was awarded a $40,000 contract to design the new museum without a competition.

Van Ryzin goes on to cast gloomy light on Mexic-Arte’s rocky financial history, and the Austin Museum of Art’s notable failure to get a similar grand scheme to fruit, noting that “Mexic-Arte’s latest plans join a long roster of wished-for museums. But Austin arts leaders and the philanthropic community have yet to realize a stand-alone downtown new museum building.” 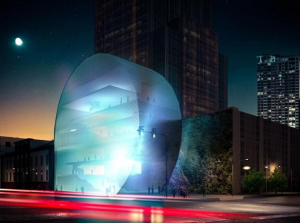 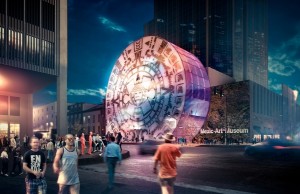