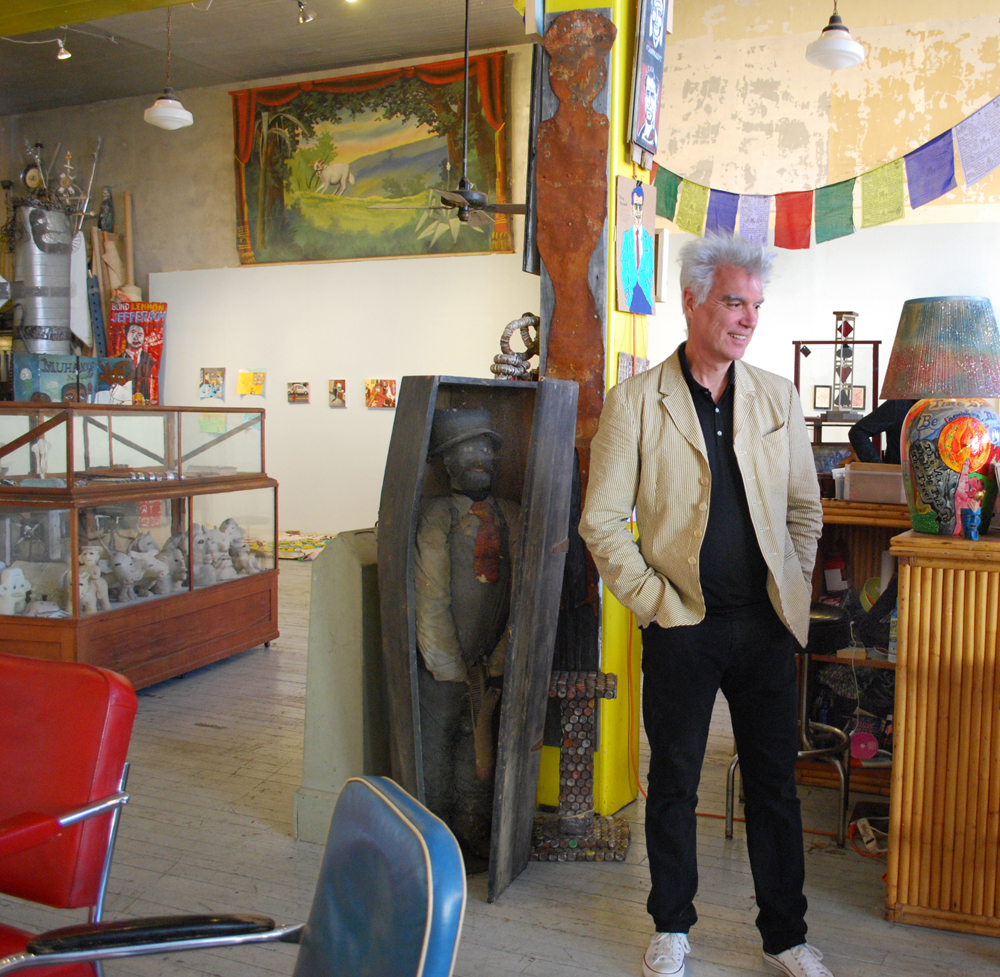 David Byrne, amidst the treasures at Webb Gallery in Waxahachie.   (Photograph by Christina Patoski)

What did the art world’s favorite rock star do on a rare day off during his recent U.S. tour with St. Vincent?  Following their fantastic “Love This Giant” show at SMU’s McFarlin Auditorium, the band boarded their tour bus for the long ride from Dallas to San Diego.  Byrne diverged, heading instead to Waxahachie to see his old friends Julie and Bruce Webb at the Webb Gallery where he has been a loyal customer for many years.  This visit he saw the exhibition, “Roustabout” which features the work of San Diego tattoo artist Jackie Dunn Smith, folk artist Uncle Pete Drgac, Oregon painter Ralph Pugay, one-of-a-kind silver and copper jewelry by Margaret Sullivan and the drawings of newly discovered Waxahachie native Tom Burleson.

Byrne gravitated to the colorful Burleson drawings and purchased two of them. 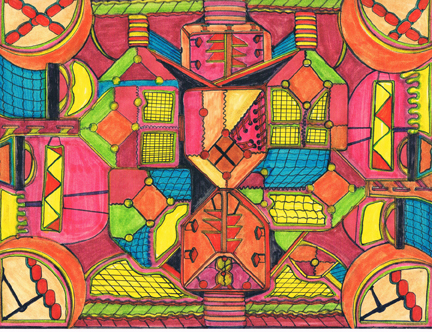 Burleson’s intriguing work recently came to the attention of the Webbs through his heirs.  Born in 1914 in Waxahachie, Burleson started off his non-linear career by playing minor league baseball, then signed up for a stint in the Navy, followed by a series of odd jobs, finally landing a position as a Bell Helicopter inspector.  During the night shift, he began making small intricate pencil drawings and continued the private endeavor even after retiring to Fort Worth where he became a recluse who depended on his wife to buy his supplies.  His family was aware of his drawings, but didn’t discover his enormous body of work until after he died in 1997.

Byrne’s interest in outsider art goes back to his days at RISD in the early 1970s. In 1985, he commissioned visionary folk artist Howard Finster to create the cover art for the Talking Heads’ “Little Creatures” album which went on to be named top album cover art of the year by Rolling Stone Magazine.

“David has always bridged the gap between art and folk art,” observes Julie Webb.  Read David’s account of his Webb Gallery visit and the rest of his day in Dallas on his blog:  http://lovethisgiant.com/10-08-12-dallas/.

“Roustabout” closes in Waxahachie on Sunday November 11. The Webb Gallery is open Saturdays and Sundays from 1 p.m. until 5 p.m. and by appointment. For more details, go to http://www.webbartgallery.com/roustabout/mainbigpage.html.

The gallery’s next exhibition opens Sunday November 18 and spotlights the work of Esther Pearl McCoy in the downstairs gallery, along with photos and puppets by New Orleans’ Miss Pussycat in the upstairs gallery.

Christina,
You may not remember me, maybe Texas Monthly ” Big Hair” edition might strike a cord!.?!?!? Just wanted to say Hi! Was just watching VH1 and saw Talking Heads” and it reminded me of times back when with Danny Turner! I hope all is well! It’s really nice to see you doing so well. Take care!