In the mid-1980s, Jose Antonio Galvan says he felt a divine call to establish a clinic for the mentally ill in the desert outside Ciudad Juárez, Mexico. Roughly twenty-five years later, he felt called to paint. As a care-giver and an artist, he goes by the name El Pastor. 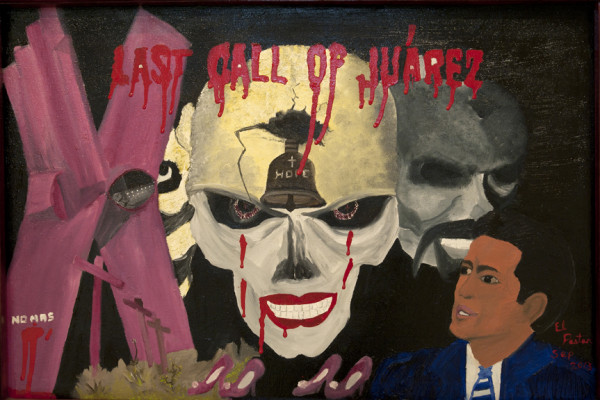 El Pastor’s painting technique is naive, but he has a style that is urgently out beyond the ordinary. In his artist’s statement he declares, “I paint what I hear and what I see.” The results describe a prophetic imagination.  In the painting above, “Last Call of Juárez,” Mexican President Peña Nieto is present to the death knell of Hope. As with many of his paintings, there is a political figure and horrific details of daily life in Juárez. Next to Nieto are empty women’s shoes, a reminder of the vanished women of that city, who were whisked away and conscripted into prostitution by cartels or else killed and their bodies hidden. But the more prominent figures in El Pastor’s work are ones from Christian stories and the darker, wilder realms of folklore. His paintings place social and political details of the current moment within a larger vision of apocalyptic destiny. 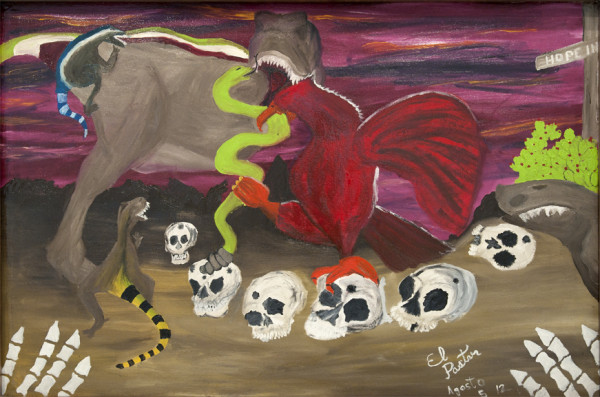 In “El Sicario” (“The Hitman”), El Pastor’s exhibition at Webb Gallery in Waxhahachie, all the paintings have a prophetic quality. By “prophetic,” I don’t mean El Pastor is creating sacred objects, but rather I’m thinking about the way the philosopher Aquinas, in the 13th century, described prophecy and imagination. For Aquinas, the imagination is the link between the depths of the self and the unseen reaches of the universe. It is the channel through which God reveals his divine plans to man in small, finite form. The theologian Walter Brueggemann says that prophetic ministry is a stance or a hermeneutic about the world of death and the world of life that can be brought to light in every context. El Pastor’s context is Juárez. His paintings aren’t so much about indignation as they are about anguish for his narcotics-destroyed city and serve as means for viewers to share in the pain of that destruction.

In interviews, El Pastor discusses forces in the spiritual world, the power of evil and God’s will for justice. The motivation behind his paintings resembles the mechanism of prophetic ministry. According to that tradition, it is by walking an audience through a pit of grief that a prophetic minister reveals a bad situation is somehow the place one finds the light of an inherent, unassailable freedom; a light that flames outward from the imagination. 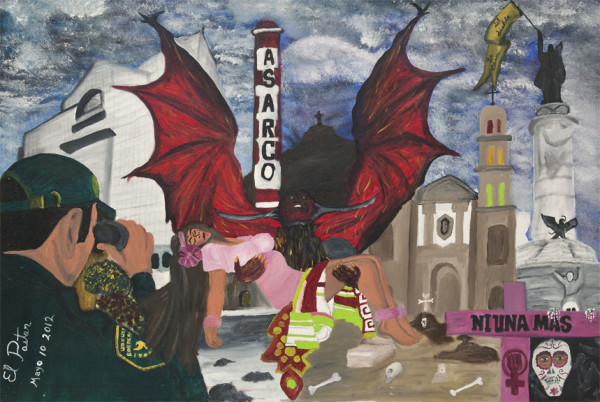 Juárez–Doorway to the House of the Devil 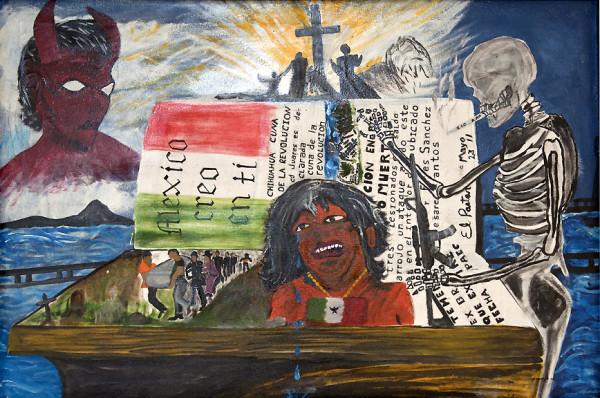 Mexico I Believe In You

In a video made for Vice magazine and a profile by The Aspen Times, El Pastor discusses his conversion experience. He was an addict and all-around rough customer living a miserable life in Juárez, when he heard a street preacher improvising a sermon in a park. The sermon awoke in El Pastor a powerful emotion that he didn’t understand. The confusion made him angry and he struck the preacher with a bottle. Bloody and wonky, the preacher held on to El Pastor and told him that he forgave him. The scales, as it were, fell away from El Pastor’s eyes and he committed to changing his life. He created Visión En Acción, a clinic for the mentally ill, and his painting, too, is a ripple effect from that conversion.

Visión En Acción is not a professional clinic. It does not employ medical doctors or psychologists. The patients lost their minds to drug use or from some trauma caused by the narcotics trade. El Pastor gives them a roof, bedding, food (when available), and tells them he loves them. The clinic is a modest place of respite in the desert, a place not controlled by drug traffic and violence. Those who live there, regardless of the harsh extensions of their injuries, are allowed the freedom to be themselves. Some of their experiences and visions inspired the work in “El Sicario.”

El Pastor’s paintings cover a lot of psychological territory. None of the canvases in this show are very large, but each contains several ambitious story fragments. These fragments range from documentary style details of border life, spirited political harangues, and spooky features out of a folk-religious cosmology. 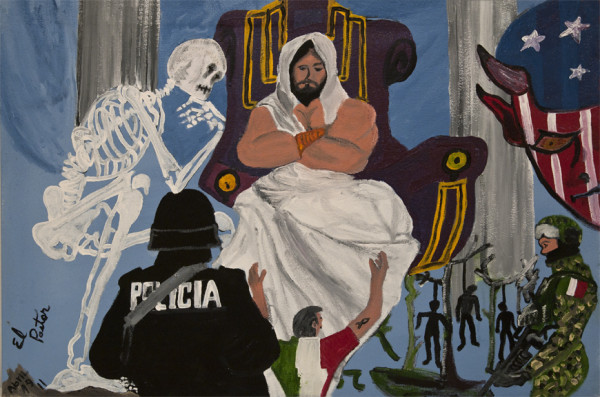 The painting titled “America’s Invisible Empire” features Jesus with a big, prison-yard upper body. He wears a white cloth like a hoodie and thick gold bracelets. The purple raiment of authority has been transfigured into a plush easy chair. Jesus is enjoying the good life as a thug might see it, a hero to heroes, like the Mexican soccer player, seen here celebrating Jesus like a goal. An authority of authorities, Jesus looms over Mexican special forces and the police, who stand in waiting for his next instinct. The three figures hanging by the neck from scrub trees remind us that Jesus’ authority reaches over death, as well.

El Pastor has bookended his thug Jesus with fascinating and complicated ideas. Jesus is seated between two pillars, symbols of civic virtues and republicanism. On the right is a star-spangled, red and white-striped devil. This sinister aspect of the U.S. republic lurks with downcast eyes near Jesus; the devil doesn’t have the authority to gaze upon Jesus, but his supernatural quality grants him authority over worldly matters. The skeleton, on the other hand, has intimate access to Jesus and gazes directly at him. The skeleton shows a philosophical attitude and is posed comfortably. The upper left frame is traditionally where we expect to see some heavenly visitor in a religious painting, but in this case, the sky on the skeleton’s side of the frame is empty. The suggestion seems to be that death serves no authority figure, and so is patient: Everything that rises, whether prophets, thugs, cartels or republics, must eventually converge in death.

The idea of a thug Jesus is an outrageous one, but not a novelty. Consider the character The Misfit in Flannery O’Connor’s short story “A Good Man Is Hard To Find,” who possesses some of the more troubling, anti-social aspects of Jesus and, as a seemingly indiscriminate killer, acts as a world-changing power with an inscrutable sense of justice. El Pastor is similar to O’Connor in this way: both show Christianity as a sharp sword, a prod toward dissent. And they each see reality as double: the world is real, but not all there is; the world is always contingent upon compatibility with God. 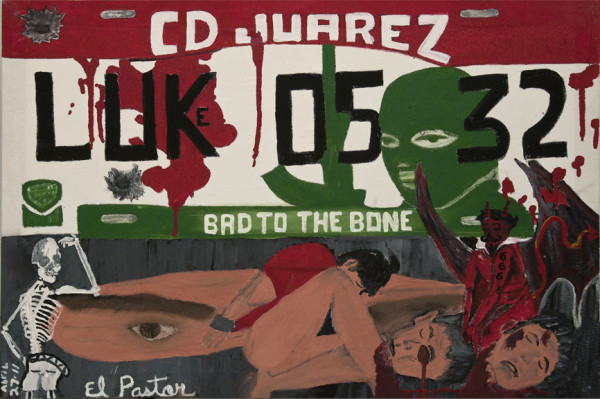 Bad to the Bone

The reality of the cartel hit man as a cold, factotum thug has been transcended in the popular imagination into a super-powerful figure of evil, one who doggedly pursues reason and compassion so to put them into permanent sleep. The hit man is the new boogie man, and the songs and folktales that warn us about him come in the form of heist movies and TV crime procedurals.

For all the fantastical elements in El Sicario, it is El Pastor’s aim to break apart popular notions about the hit man. He shows mothers and children in this role. He ignores the rhetoric of gangland loyalty and instead emphasizes devastation and loss. He shows us that the violence at the borderland is not just an ethical violation; it disrupts our interpretation of the world.

El Sicario  does what legitimately terrifying religious art has done for thousands of years. It takes the viewer seriously, and directs one’s attention to deep truths found in the imagination: human dignity is good and that goodness cannot be bartered; some actions are so terrible they cannot be redeemed. It is art that admonishes us to consider the pain of the world and walk through the harshest of circumstances with others. By doing so, we dignify those others and ourselves.

El Sicario is at Webb Gallery through April 4. El Pastor will give an artist talk on Sunday, March 22. Webb Gallery is located at 209 W. Franklin St, Waxahachie, TX 75165