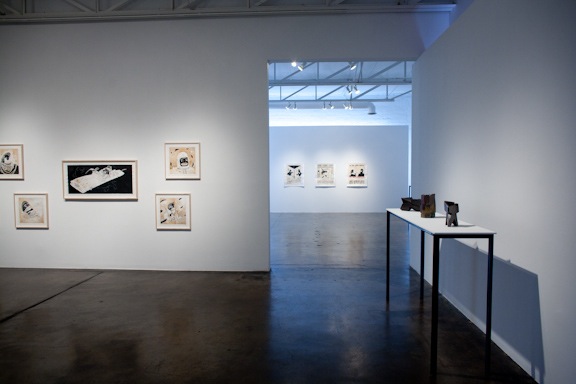 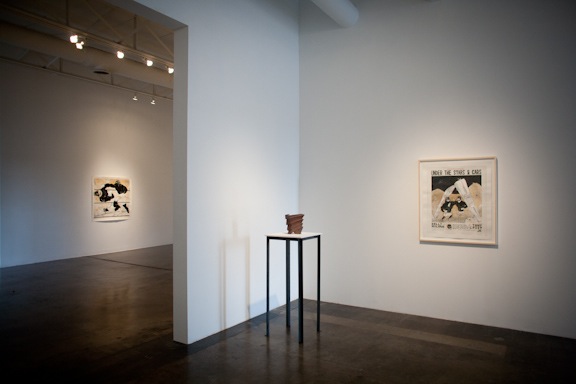 Lawrence Lee and Jonathan Cross are art dopplegangers. While they look nothing alike, the trajectories of their art careers have played out in very similar ways, in no small part due to Barry Whistler’s good nose about the two of them. The two artists had never met until the opening reception of their shows at BWG a couple weeks ago, at which time they fell into conversation, smacking their heads at the uncanniness of all the things they had in common: comics and sci-fi action, misadventures and geology. They also share the similarity of having had Barry Whistler sniff out their skills when both were just starting grad school, Lee about five years ago, and Cross just this fall.  Whistler clearly saw the corollaries between the work of the two fellows and subsequently opted to mount two exhibits — of Lee’s cartoonish drawings and Cross’ primordial ceramics — side by side. It was a pretty savvy move. 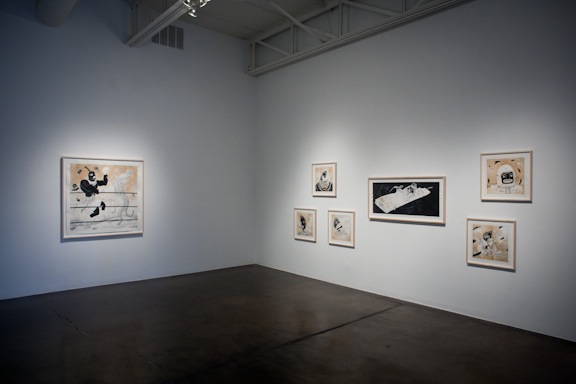 Lawrence Lee’s exquisite drawings of boxers, er Boksers, as his show is called, are by turns hilarious and poignant. He jumbles up depictions of tribal African men fighting with dudes  tricked-out in astronaut garb or hip-hop regalia. The decadently detailed drawings, with their simple palette, are full of flurries of plot and sub-plot — action punches through the foreground where pitch-black bodied boksers pummel each other or fight fierce felines, while in the background hyperbolic crowds cheer and rage. Lee is always teasing out mythologies, real ones and ones he makes up. My favorite piece, We Traveled to Where There Are Other Stars… shows a pimped out low-rider full of of masked bandits flying through space. One of the bandits holds a pet dinosaur — a teeny weenie brontosaurus. It’s such an awesome image of power and bravado. 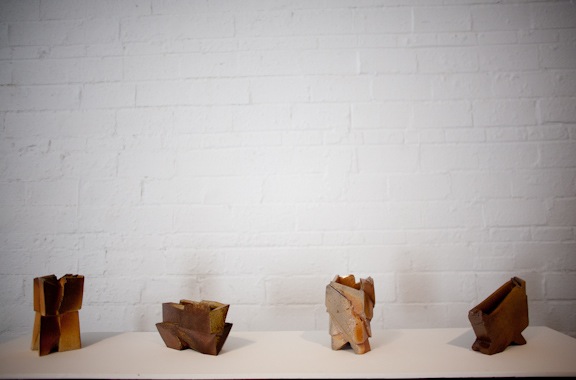 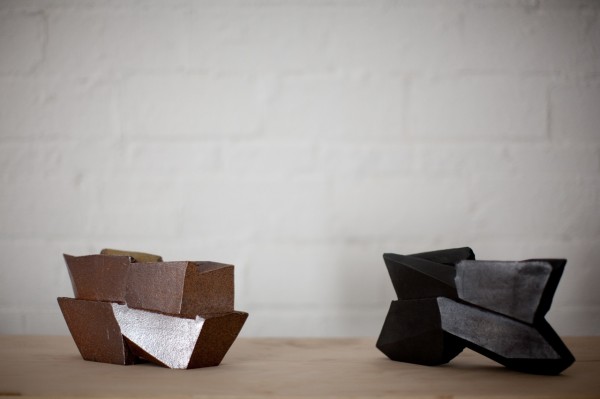 The work of Jonathan Cross plays off of that bravado in fiercely angular ceramic sculptures that look like things left over after a fall out — condensed shards of nature after nature is gone. Set atop airy pedestals, the sculptures are free to be scrutinized from every angle as you would an ancient artifact. But the work is also unabashedly campy, paying homage to a good rearing-up on Star Wars and Saturday morning cartoons — action-figure mutation and transformation moves in each piece as you move around it.

The earthy tones of Cross’ work find beautiful visual mates in the tea-stained surfaces of Lee’s drawings;  and the velocity of the sculptures’ shapes mixed with Lee’s virile images infuse the gallery with an energy equal to, let’s say, the Millenium Falcon at light speed.

Jonathan: My name is George Trauth. We once met at an exhibit at U.D. I teach ikebana in Irving. Your pieces in the last two photos are superb. I constantly look for ikebana “containers”. (In the ikebana world, we don’t use the word “vase”. Any object, either vertical or horizontal, that can contain flowers is called a “container”.) Could some of the “containers” in the last 2 photos be done in other colours, such as light-to-dark green, orange, light-to-dark cream, etc.? Just a thought! All the best, George Trauth (Dallas)