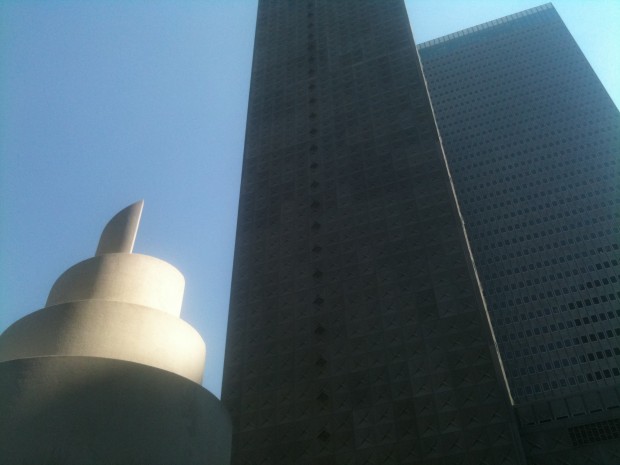 With each bright new building added to the Dallas skyline, the city grows more and more impressive, but we Dallasites also risk overlooking those architectural treasures that have grown familiar over time, like a tiny Philip Johnson project in the heart of downtown. 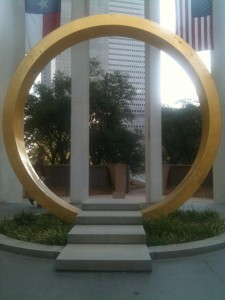 Johnson designed an entire park – Thanksgiving Square (technically triangular) – under a private-public commission to create a special place for nourishing the spirit and finding respite from depraved urban chaos. The site includes a bell tower, a 14 foot “Ring of Thanks” that looks like a giant gold wedding ring, and lots of grassy plots and graceful waterfalls, but the structure that leaves you wide-eyed is a white marble spiral winding 58 feet high. It is dwarfed by surrounding skyscrapers, but if you happen to be driving down Ervay, Bryan, or Pacific, you will probably find yourself staring hard and slowing down as you pass the Chapel of Thanksgiving.

Inside is a seven ton cubic altar of Carrara marble on a Texas red granite base and a tiny round space for gathering or just being alone. An interior ramp spiraling up along the wall leads to a mysterious, curtained second floor not open to the public, but you’ll want to lay on the floor anyway to gaze at the Glory Window, a 67 panel stained-glass helix of a ceiling (the glass was designed by Frenchman Gabriel Loire). There is no designated religious branch dominating the space, just an omnipresent human spirituality fed by good design and good materials. 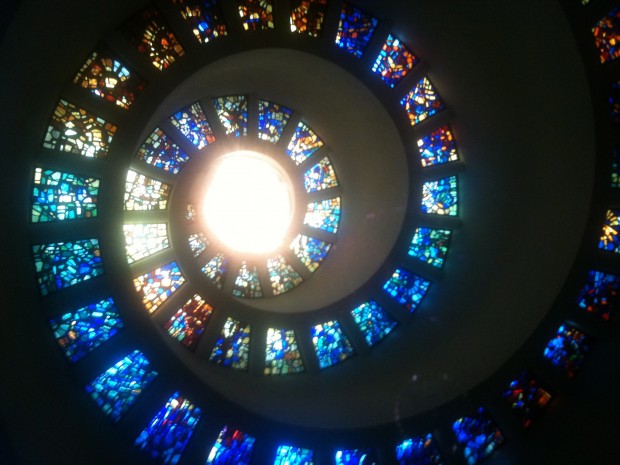 This coming Sunday, Thanksgiving Square will be the site of a commemoration of the tenth anniversary of 9/11, with speakers and a ceremonial ringing of the tower bells beginning at 7 p.m., but the chapel will be open from 10 a.m. until 9 p.m. 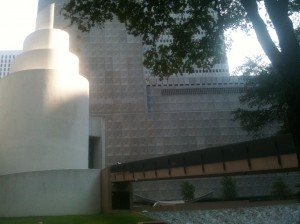 I suppose all cities have a quiet little park surrounded by buildings not wildly different from the Twin Towers, and Dallas, for all its Bible Belt showmanship, got it exactly right in hiring Johnson, one of the all-time greats.

More importantly, Bobby Ewing ended his marriage to Pam in Thanksgiving Square. You can watch the four minute scene here (YouTube won’t let me embed this one.) This may look like bad acting to people in Houston, but no, we really do behave this way inside Dallas city limits.

Betsy Lewis is a writer who lives in Dallas and would give up Ewing Oil if you’d only take her back.

I would love to see the inside!(: I can’t find pictures anywhere. I plan to possibly get married here when I’m older. My boyfriend went & loved it & wants to have our wedding there. But I wish I could see the inside:(
From the pictures now, it seems like a VERY pretty place!(:

The inside is tiny – capacity 80ish. I snapped some unremarkable pics I can send you if you email me. [email protected]

Where, do you have parking for Thanksgiving Chapel or u have a tour!