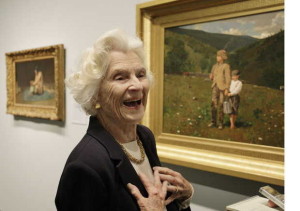 Ruth Carter Stevenson, Philanthropist and President of the Board of Trustees of the Amon Carter Museum in Ft. Worth, daughter of oilman, newpaper publisher and fierce Ft. Worth booster Amon G. Carter Sr. (1879–1955), died at her home in Ft. Worth on January 6. She was 89.

Stevenson was solely responsible for seeing that her father’s wish to establish a museum for the city of Fort Worth was realized. Under her leadership, the Amon Carter Museum of American Art opened to the public in January 1961.

Born in Fort Worth in 1923, Stevenson left when she was fifteen for elite schools on the east coast, where she developed an appreciation for art. Upon her return to Texas in 1949, at the age of twenty-six she was elected to the board of the Fort Worth Art Association. During her first year in this capacity, she was instrumental in organizing the first major American art exhibition in Fort Worth, which included works by Winslow Homer.

In 1960, Stevenson began a twenty-three-year association with the Fort Worth City Art Commission; many of these years she served as chairman. She also served on the board of Fort Worth’s Trinity Valley School, and in 1963 she founded the Arts Council of Fort Worth and Tarrant County. That same year, she was appointed by then Governor John Connally to the board of regents of the University of Texas, becoming only the second woman to serve in that capacity. In addition to pressing for the preservation of the historic campus architecture, Stevenson played a key role in the full desegregation of the University of Texas school system. In 1992, the university established the Ruth Carter Stevenson Chair of Architecture.

Stevenson assumed the presidency of the Amon G. Carter Foundation, renowned for its charitable giving, after the passing of her brother, Amon G. Carter Jr. in 1982. She served on the Amon Carter Museum of American Art’s board for more than fifty years, and in her last decade in that role she oversaw a massive expansion of the structure. The new building increased the museum’s gallery spaces fourfold and resulted in a state-of-the-art conservation facility and both cold- and cool-storage vaults for the museum’s expansive photography holdings.

Stevenson’s involvement with the arts reached far beyond the state of Texas. She served on the Visiting Committee of the Fogg Museum at Harvard; joined the boards of the National Endowment for the Arts, the National Trust for Historic Places, and the American Federation of Arts; and became the first woman appointed to the board of the National Gallery of Art in Washington, DC. In 1987, she was invited to the Supreme Court building in Washington as an honored guest at Justice Sandra Day O’Connor’s event for women who had made a difference in American society.