In a newsletter email and social media post, the Houston-based gallery Nancy Littlejohn Fine Art (NLFA) announced that it has officially closed as of yesterday, September 30. 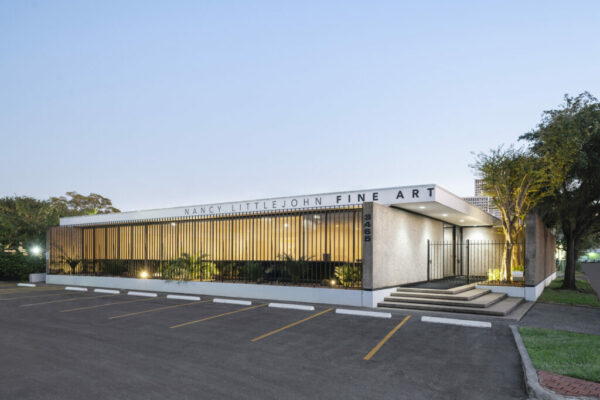 NLFA, which originally operated in Houston from the late 1990s to the early 2000s, reopened in 2019. Since then, the space’s 5,000-square-foot River Oaks-adjacent location has presented over thirty exhibitions, including solo shows by artists such as Mary Flanagan, Cruz Ortiz, and McKay Otto. The gallery’s current exhibitions by JooYoung Choi and Libbie Masterson were originally set to close on November 5.

In a statement released by the gallery, Ms. Littlejohn wrote, “After deep reflection, Friday, September 30, 2022, will be the last day for NLFA programming and events as we have experienced them. We would like to thank you all in gratitude for the beautiful memories we have made and the many lives we have touched and will continue to impact in the future.”

Ms. Littlejohn told Glasstire that after thirty years in the art business, and running an art gallery for most of that time, she is ready for a new chapter in her life. She said, “I’m at an age where I can do what I want to do right now, so I’m going to take some much needed time off… I’ve already had a lot of people reaching out to me, wanting me to work or consult or curate, but honestly I’m wanting to pump the brakes and take some time for myself.”

When asked about the artists NFLA was representing, Ms. Littlejohn told Glasstire that although the artists would like to continue their relationships with her, it is not something she is moving forward with. She said, “I love all of the artists that I work with dearly… but I just don’t want to commit to anything quite yet.”

Similarly, Ms. Littlejohn spoke highly of her employees and alluded to a private celebration soon with close friends and the NFLA team. Finally, she added, “Thank you to the Houston art scene for being there and all of the wonderful patrons and artists, everyone around the country who has supported us. Love and light to everybody.”

How unfortunate Glasstire wasn’t able to include the artists’ perspective for this article. Perhaps they are being advised to not make public statements?

Wow, she couldn’t even finish the current exhibition? How much notice did she give the artists that are on view?

Really seems unfair to the current artists on view to pull the show more than a month early… while I’m all for growth and moving on to new opportunities and allowing yourself a break after 30 years in the game, why treat your artists this way? Why the subtle and coy “oh my artists on roster want to continue with me but idk if I want to commit”? Hoping for some more information and context about this situation because this is a bad look. Maybe a lease for a 5000 sq ft space in River Oaks for two more months was not possible? But then again why have a show open in September and run through November if the lease wasn’t going to be renewed?

Fingers- crossed our Houston gallery community can find new homes for all the NLFA artists left without representation.

30 years in and out of the art biz…mostly OUT. There is something very wrong here.

W H A A A A U U U U U T T T T ?? Is this actually a news story? It sounds like an extension of the press release “NFLA” put out. She suddenly shut down her gallery MID SHOW because she is ready for a new chapter in her life? Does that sound plausible to anyone or are we all just conditioned to being ok with alternative facts? Personally I have a lot of questions. Like….have all the artists been paid for sold work? Has all unsold work been safely returned?

It all sounds extremely suspicious and gives me concern for the artists of “NFLA.” When a business abruptly closes… something is usually up. And in my experience when this happens in the art world the artists are the one’s who pay the price.

There is a story here. Glasstire just isn’t telling it.

This is highly unusual to shut down before a hanging exhibition has had its announced run. It’s especially hard on the artist who I’m sure put a lot of effort into putting together a solo exhibition.

All of this— all of what she said about her artists wanting to continue a relationship with her while she ponders her new and many opportunities, speaks for itself. Who does this? Who abruptly shuts down the livelihood for so many who depended on her with this—this unacceptable closing letter.

My heart goes out to the artists who were given less than a weeks notice. This is not the way we do things. You all deserve so much better than an ending.

Pump the brakes. Not pump the breaks.

A gallery closes. That is not a story. Lol. Why even publish this without giving more information? I saw Instagram posts about this too that say, please do not ask questions! How suspicious.

Nancy Littlejohn; I admire and congratulate you for the time, effort and investment you made in the art and business community. Through your gallery I was exposed to many new and interesting visual artists. I know too well the expense, in hard-money and human passion, invested in any physical business, especially in an art related field.
Best wishes for an exciting future and thank you!

I too would like to hear the artists’ perspective on this. This is happening just months after a general reopening after the pandemic. The timing seems odd.

Nancy Littlejohn was my art dealer many years ago. I can honestly say she has more integrity in her little finger than most art dealers combined. She was honest and treated me with the upmost respect. Nancy Littlejohn is a class act and I wish her only the best going forward.

Truth is so obvious. Art wasnt selling enough to pay the rent/bills. Duh yall. Why else do galleries close?