Update: Due to a heat advisory warning this Saturday, June 25, the Neighborhood Leap launch has been moved to Thursday, June 30 from 8 – 10 pm.

Amphibian Stage, a nonprofit theater company in Fort Worth, has partnered with Blue Zone Project Fort Worth, a community-led well-being improvement initiative, to launch an augmented reality art tour of the city’s South Main neighborhood. 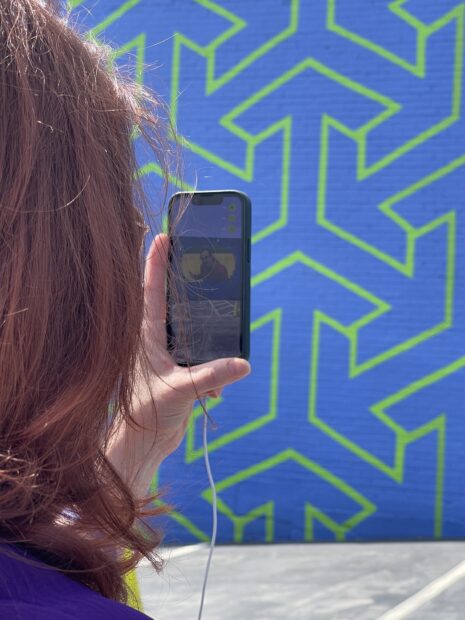 The app-based program, Neighborhood Leap, prompts users to get outside, walk, and explore the neighborhood while engaging with a range of virtual experiences, including visual art, music, movement, and storytelling. The app development was supported by DevHouse, a creative agency based in Dallas; Near Southside Arts, an organization that promotes creative endeavors in the Near Southside neighborhood; and the Texas Commission on the Arts.

In a press release announcing the app, Amphibian Stage Founder and Artistic Director Kathleen Culebro said, “The last two years have taught us the power of working to support our community. The South Main Village residents and business owners came together and helped one another through some very rough times. We wanted to do something to give back to our city by highlighting all the wonderful things our neighborhood offers.”

Matt Dufrene, Vice President of Blue Zones added, “In addition to Neighborhood Leap being incredibly innovative, it touches on so many aspects that align with Blue Zones principles for better well-being. An environment that promotes moving naturally, downshifting through the exploration of art and creativity, and social interactions – it’s all there within a 1-mile loop in an area designed for all users.”

Screen grab of an augmented reality artwork on the Neighborhood Leap app. Artwork by Alli Rogers.

Fort Worth mixed-media installation artist Alli Rogers told Glasstie, “This project has been such a welcome opportunity for me to think, grow, experiment, learn and dream. My digital painting series, REcreation Cantos, focuses on people and how we build our relationships with one another in a changing environment. Who lives here? Who’s just visiting? Who is being left behind or pushed out? And what is our agency in shaping and re-creating those relationships? The digital nature of this art walk positions these questions as ghostly apparitions of potential—often invisible to the naked eye, but there nonetheless.”

Daniel Banks, Co-Founder and Co-Director of DNAWORKS, told Glasstire, ““In Half in Two, we surface the history of the area in which the tour takes place that may be unknown to some viewers—it was a thriving Black neighborhood that endured racial violence and the construction of an interstate highway through it. In the words of activist Dr. Opal Lee, the community eventually ‘evaporated.’”

He continued, “The dancer’s (Adam W. McKinney) body, which starts out as a silhouette layered with headlines from the era, comes into focus as the history is recounted by elders who lived through it. This is part of a series of ‘memorial activism’ works that DNAWORKS is creating in Fort Worth around hidden and forgotten narratives and histories. We must remember in order to heal.”

The Neighborhood Leap app will be available to the public on Saturday, June 25, 2022. For more information, visit the Amphibian Stage website.