The Foundation for Jones Hall (FJH), which oversees the restoration and refurbishment of Jones Hall, a performing arts center owned by the City of Houston, has announced the start of the second phase of the building’s $50 million renovation. 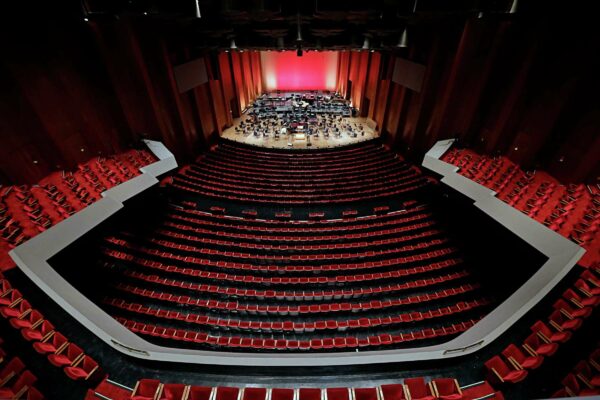 Both the Houston Symphony and Performing Arts Houston (formerly the Society for the Performing Arts) use the downtown building, which opened in 1966, as their main venue. In 2020, FJH embarked on a multi-year renovation of the building, originally designed by Houston-based architectural firm Caudill Rowlett Scott and funded by the building’s namesake Jesse H. Jones. The work has been scheduled to take place during the summer months so as to not interfere with either organization’s production schedule.

The first phase of the renovation included the creation of two new aisles on each side of the center orchestra section in order to improve accessibility and audience flow through the space. Last summer, improvements were made to the acoustics of the space to correct echoes and sound delays.

In a press release announcing the upcoming renovations, Barbara McCelvey, FJH’s board president, stated, “We were thrilled by the impact made during the first phase of work. The acoustical improvements were noticed immediately by musicians and audiences. And while the no-aisle continental seating layout was popular in the 1960s, our patrons have long wished for easier ways to get to their seats, whether from front to back or from one side to the other. The response to the first phase gives us confidence and momentum for the next phases of work we’ll undertake over the next few summers.”

Work will begin this month to continue to address both infrastructure and acoustic issues including:

– Refinishing of the stage floor and rebuilding of orchestra pit floors and the area where they meet the stage
– Replacement of hydraulic lifts for the orchestra pit with a new lifting system, which will modernize this important piece of stage automation, allowing for gentle, quiet movement and stable support of the stage and orchestra pit
– Work to replumb and redirect cable and conduit, while removing electrical equipment to further modernize infrastructure
– Replacement of the audio network, which consists of the equipment and data network that support amplified performances, to further revamp acoustics in the hall for musicians and patrons for superior sound

Renovation work will continue into the future as FJH seeks to improve the performance area and the experience of patrons. Additional acoustical improvements are planned, as well as renovations to the Green Room, the lobby, and other public spaces to alleviate audience crowding. Other future improvements include the installation of new seats, widened stairways, and additional and more accessible restrooms.

FJH has projected that the total cost of the renovation will be $50 million, and so far has raised more than $25.5 million through their capital campaign Overture to the Future.

will they add more restrooms

I love Jones Hall. The Gemini II sculpture in the lobby by Richard Lippold is still one of my favorite pieces of public art in Houston. A vestige from our early, optimistic Space City years. The lobby is great, the street elevations are great. Go Jones Hall!