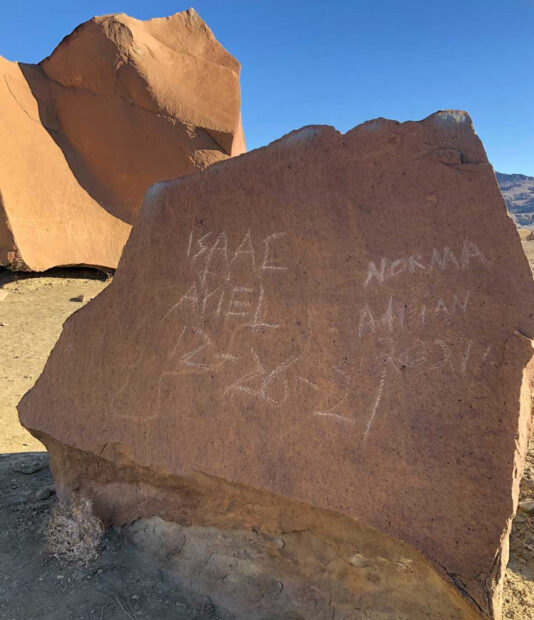 Last Tuesday, in an effort to gain assistance from the public, the National Park Service (NPS) released information about recent vandalism at Big Bend National Park. On December 26, 2021, visitors scratched the names Isaac, Ariel, Norma, and Adrian, along with the date, across a petroglyph. The prehistoric rock carving is estimated to be 4,000 to 8,500 years old. NPS has stated that the rock has since been treated, but that the damage is irreparable. While the names of the perpetrators are etched in the stone, NPS is looking for any information that may assist in identifying the vandals.

Big Bend was established in 1935 and opened to the public in 1944. At 1,252 square miles of land — larger than the state of Rhode Island — the park preserves the largest section of Chihuahuan desert in the United States. Early in its history, Big Bend had no paved roads and remained largely unknown to the public. In the 1960s it became a destination for rafting, hiking, birding, and the study of natural history. NPS has noted an increase in vandalism and graffiti in the area, reporting over 50 instances of vandalism since 2015.

Since their creation, National Parks have been a haven for artists. From photographers like Carleton Watkins and Ansel Adams to landscape painters like Albert Bierstadt and Sandy Rodriguez, artists have documented and been inspired by these spaces. A number of national parks even have residency opportunities for artists, including Big Bend. The park’s Art on the Borderland program offers two residencies a year. 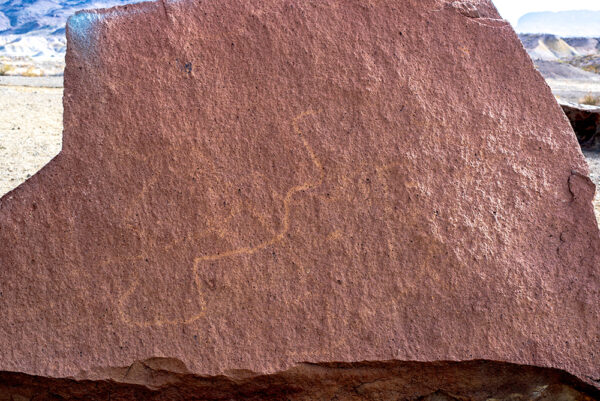 Photograph of a petroglyph on a rock at Big Bend National Park, prior to vandalism. Photo credit: Paul Leicht

Fort Worth-based photographer Paul Leicht documented the now-defaced petroglyphs in early December while visiting Big Bend with his wife, Challyn. Upon learning there were petroglyphs in the area, the pair set out to search for and document these artifacts. Mr. Leicht took to social media to share his frustration about this most recent case of destruction and shared additional thoughts with Glasstire. See our conversation with him below.

Glasstire (GT): As an artist, why are you drawn to National and State Parks?

Paul Leicht (PL): National and State parks are an invaluable resource. Especially in Texas where 95% of the land is privately owned. It really is awesome that there are pockets of land set aside and preserved for everyone to enjoy. Not just the few lucky enough to own or inherit wide swaths of land — it’s for everyone. Regardless of your income level, there’s a place that you can go and experience the natural wonders, the history of the land and learn about the people who once inhabited it throughout all of its eras. 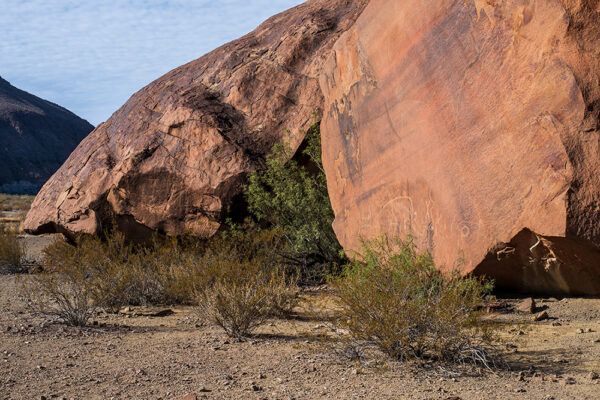 Photograph of a petroglyph on a rock at Big Bend National Park. Photo credit: Paul Leicht

GT: Why are these sites important to you personally?

PL: These places are important to me personally because I need to feel a connection to this land, this state. I feel a need to explore and learn its history.  And for me that involves getting out there to immerse myself in it,  I can’t really understand it until I’m standing in the middle of it.

GT:How did you feel when you saw the news that this petroglyph had been defaced?

PL: Betrayed, disappointed, angry, sad and honestly, scared. Betrayed because you want to trust people not to ruin things that you hold valuable. Disappointed because these people didn’t hold this place valuable. Angry that they destroyed evidence of history that can teach and inspire. Sad for all those reasons, and scared because I don’t want sites like this to get restricted. I don’t think hiding or pretending sites like this don’t exist serves our greater good.

I feel that it’s one of the most culturally valuable parts of the park and it’s a shame more resources haven’t been diverted to protect it and present it in a way that it deserves. 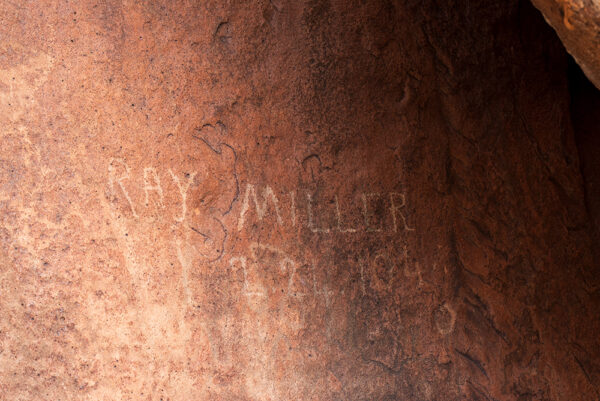 GT:NPS has noted an increase in graffiti and vandalism in recent years. What do you think might be the cause of this?

PL: A lack of respect and lack of knowledge on how to behave at a site like this.  A lack of curiosity in understanding history. A lack of awareness in how our actions affect others and a general culture of selfishness.

The National Park Service asks that anyone with information regarding this or other vandalism at Big Bend contact law enforcement staff at (432) 477-1187.

This and That: Dennis Blagg and a Big...

This is definitely frustrating. Kudos to Challyn and Paul for documenting it and raising awareness. I couldn’t agree more with Paul. Hopefully the park is treated with more respect moving forward.

Nothing is sacred in this age of virtual (not reality) and ‘all about me’-egoism. Probably just young fools with no idea of the value, but that points directly back to a lack of education somewhere in a life. It happens everywhere – sigh…

There have been public social media comments from members of the Jumano Nation about this. I appreciate the specific personal perspective being shared here. Still, it seems reasonable to include a mention of the original petroglyph creators and give some fuller cultural context to this article.