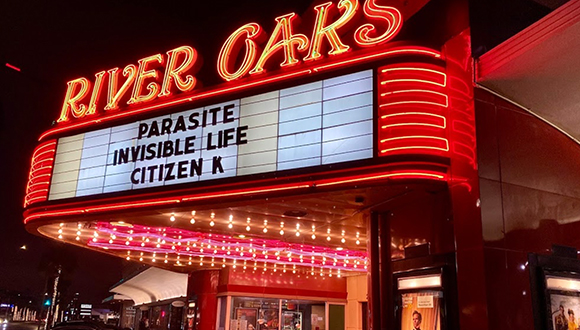 The storied River Oaks Theatre in the west Houston neighborhood that it is named for will close at the end of this month, following a stalemate between Landmark Theatres, the art-house cinema chain, and the River Oaks Theatre’s building owners, Weingarten Realty, which also owns the River Oaks Shopping center where the theater is located.

Following a back and forth between parties, it was reported yesterday that there is, in fact, no deal.  According to Culture Map, Houston, the following statement was released by Landmark:

“After many months of waiting for a response, negotiations are underway. We are making progress, however, Weingarten insists that during a substantial period of the extension term that Landmark pay the same rent prior to the pandemic.

“The pre-covid rent reflects a different world that does not address the realities of today or the foreseeable future.
Landmark has also offered to pay an additional percentage rent to allow Weingarten to come close to the pre-covid rent.

“We are hopeful Weingarten accepts our most recent offer otherwise we have no choice but to close next week.”

The magazine also released a statement attributed to Weingarten Realty, which reads:

“Weingarten Realty has been in communication with Landmark over the past couple of days. We have offered to forgive the rent past due during the time the theater was forced to close and we are willing to work out a 24 month repayment plan for the balance. We look forward to their response.”

The news was reported in the Houston Chronicle yesterday that a Landmark spokesperson expressed disappointment about a lack of response from Weingarten Realty. In an email to the Chronicle, Landmark writes: “…there has been no response or acknowledgment of the revised proposal we submitted to Weingarten (Realty) this week. In good faith, we presented a fair and reasonable proposal and asked for a response by close of business today. Unfortunately, there has been no response or even acknowledgment of this proposal, leaving us no choice, but continue with our preparation to leave our beloved home of 30 years.”

Over its 82-year history, including the takeover by Landmark in 1976, the theater has premiered many independent and foreign language films since its first feature screening, in November, 1939 — Bachelor Mother starring David Niven and Ginger Rogers.

In another story by the Chronicle from last week, the paper announced an effort from the Houston Film Critics Society (HFCS) to garner support for saving the theater from closing. “Operation: Save Houston Cinema,” as the initiative is dubbed, encourages supporters of the theater to purchase tickets to the movie The Father, as well as another movie with Oscar buzz, Minari. Tickets for both movies can be purchased here.

“The River Oaks Theatre is not just a beautiful example of classic cinema architecture,” says HFCS president Doug Harris in a statement published by the Chronicle. “It’s a retreat, a temple, a sanctuary of sorts. And it’s one of the few remaining showcases for independent and international films.”

One thing: The River Oaks Theatre is not really in River Oaks, it’s in Montrose. I just think it’s important to remember that, in its modern heyday of the 1970s-90s, the theater was part of the fabric of a diverse bohemian cultural area known for its arts, cheap rent, and wild nightlife, not so much a part of the nearby wealthy residential neighborhood for which it it had been named in the 1930s.

I am 73 and grew up in the Heights, going to the River Oaks since my childhood. It was the first public air-conditioned building in Houston, and where I first experienced the miracle of coolness in Houston’s sultry summer. I was at the unforgettable 50th anniversary celebration in 1989. . . .all good things must end; God bless all who made the River Oaks theatre a cherished part of what made Houston “home” for 4 generations of movie-goers.

We should all weep. This was the only foreign/indie film destination for a city of 4-6 million! Horrors!