Inner Vistas: Charlie Kitchen’s “On the Mountain at Dawn” 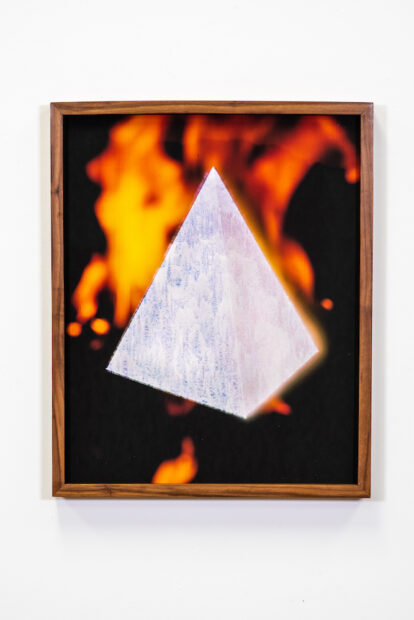 On some level, all photography is manual. A thumb presses the shutter; a finger taps the small white disk at the bottom of the phone screen to capture a fleeting moment. In On the Mountain at Dawn, on view by appointment at San Antonio’s Presa House through October 10, San Antonio artist Charlie Kitchen makes the connection between hand and photo both more explicit and more complicated, presenting an array of handcrafted photographic images that play with their subject matter and perspective in novel, appealing ways.

The source photos in On the Mountain at Dawn were taken during a honeymoon road trip from San Antonio to the Pacific Northwest, with stops made along the way to take in craggy red rock formations, mountain lakes, white-flecked waterfalls, snowcapped mountains, and the intensely, almost suffocatingly verdant greens that drench the northwestern biosphere. Kitchen captured photographs along the route with a 35mm and a large-format camera fitted with a filter box containing hand-cut vinyl masks. The resulting work is shaped by a printmaker’s sense of craft, an intensively manual approach to photographic meaning-making. 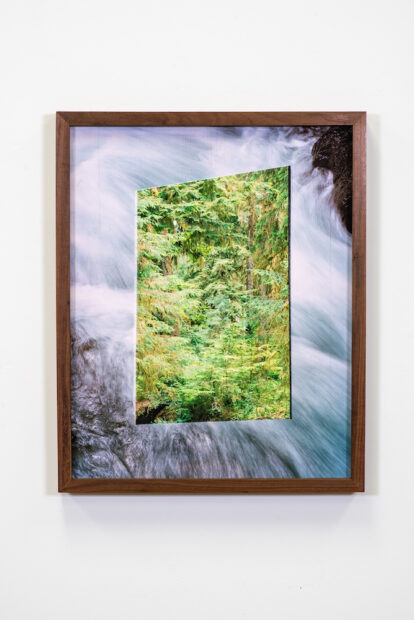 The key part of Kitchen’s process takes place in the gap between lens and film, in the bellows of the camera, where he inserts hand-made masks cut into various abstract and pictorial shapes to selectively block individual exposures. By using inverted masks on different vistas, he’s able to interpolate or juxtapose disparate photos and perspectives into novel compositions — a human interloper in the mechanical photographic process. (Kitchen also made all of the simple but elegant frames in which the works are presented, intensifying the handcrafted feel of the overall experience.)

Some of the most striking works in the show are the most obvious examples of this masking technique, like Analog Matte #133 (Buckeye) [pictured at top], where a pyramidal assemblage of snow-covered pines in the center of the composition stands in harsh contrast to an out-of-focus background image of fire and darkness. One recurring motif is the juxtaposition of opposed natural states — churn and stasis, fluid and solid, water and earth, ice and fire, the zoomed-in microbiome of a patch of lichen and the wide-focus capture of a whole forest cascading past the horizon line. Bluntly framed by flat geometrical masking, the forest and river mashup in Analog Matte #104 (Sol Duc) is one of a series of similarly masked images hung together to illustrate how Kitchen’s methodology works to subvert the flattening tendency of photography. Each image in the set is woven together with other points of space and moments of time consciously retrofitted to match the artist’s perspective ex post facto. 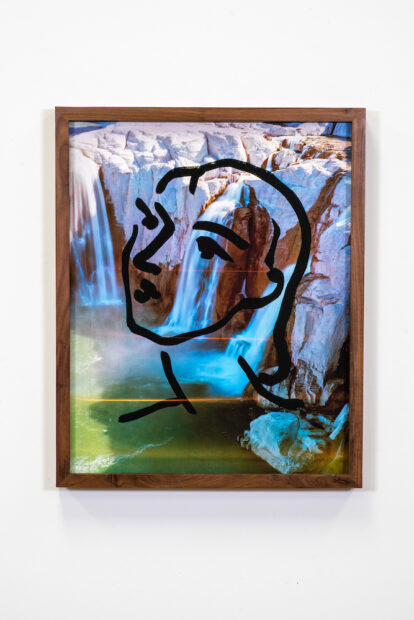 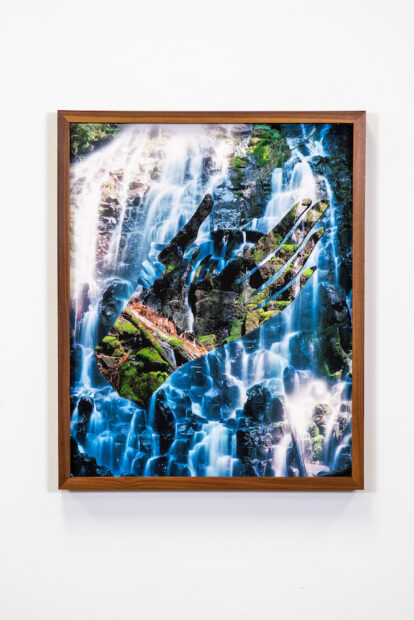 Each individual image in On the Mountain at Dawn doubly indexes Kitchen’s perspective: first in the familiar idiom of nature photography, and secondarily through the plan of the designer imposing an alternative set of spatial relationships on the composition. A drawn face or silhouetted hand crop up irregularly, their planar logic at odds with deep, diffuse imagery of waterfalls and whitecaps. Unexpected symmetries emerge. In contrast to the stark geometrical masks used for other works, in Analog Matte #130 (Ramona Falls), a gently undulating waterfall is jarringly superimposed with the form of an outstretched hand, its attenuated fingers subtly echoing the dynamism of the rivulets flowing through the background. 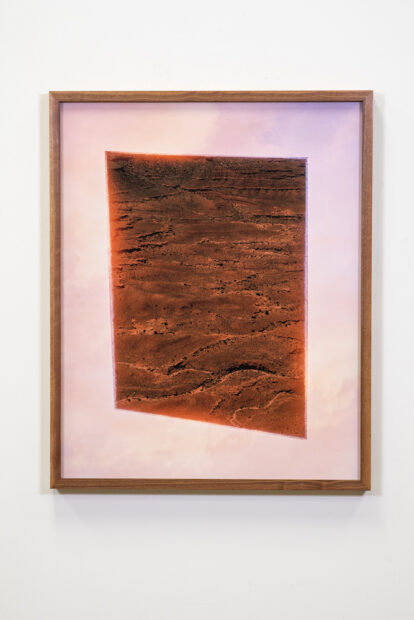 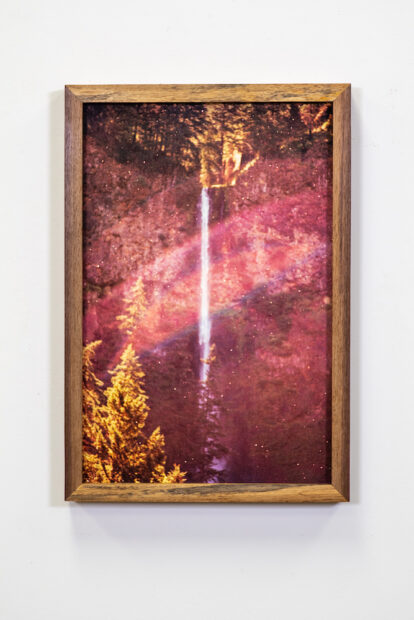 While Kitchen’s masking technique achieves a recurring perspectival language throughout most of the works in On the Mountain at Dawn, his interventions can sometimes register as more subtle, barely there. In Analog Matte #98 (Buck Canyon), a tightly cropped photograph taken at the burnt-red bluffs outside Moab, Utah looks like it might have been snapped on the surface of Mars, but doesn’t appear to have been altered much. Far from the kind of photo most newlyweds might take on a honeymoon, this intense focus on a ravaged element of the natural landscape signals Kitchen’s interest in the harsh and inaccessible, wringing a vital image from lifeless rock. Elsewhere Kitchen trains his sight on the picturesque (and ubiquitously photographed) Multnomah Falls near Portland, Oregon, but abstracts it nearly beyond recognition, allowing a soft focus and dominating, aurora-like lens flare to cast an otherworldly pall over the image.

Here Kitchen’s manipulation is less about the hand and more about the eye. The artist has talked about how his lifelong interest in skateboarding influences his artistic practice, and throughout this show it’s evident that the skater’s parallax view of the landscape has led him toward untamed places, terrain deemed uninviting or unnavigable by most people but specifically sought out for these attributes by the curious and intrepid. Another virtually untouched photo of Cape Flattery, the northwestern-most point of the United States and the ultimate destination for Kitchen and his wife on their road trip, hangs almost in opposition to the thoroughly manipulated images elsewhere in the exhibit. It bookends the geophysical diversity Kitchen places in careful, tense balance throughout the show, which vaults from sea level to the tops of the rugged peaks demarcating the liminal boundaries of this country and its wildernesses. 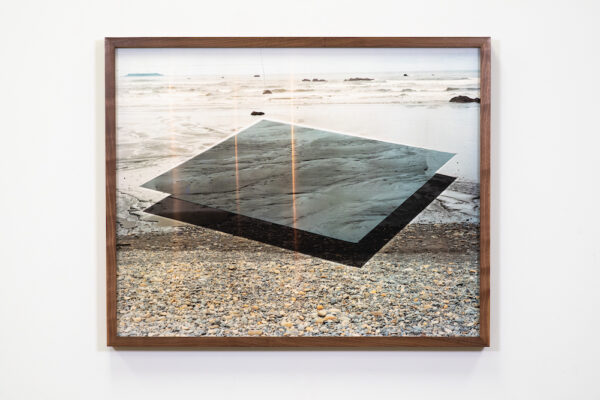 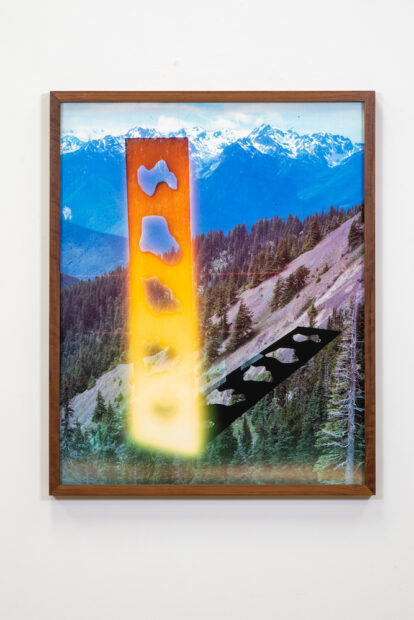 Accidental or incidental features like lens flares crop up repeatedly throughout the exhibition, acting like a coda of uncertainty connecting these otherwise rigidly planned and processed images. As a whole, On the Mountain at Dawn is saturated by wildness, punctuated by accidental interactions of light and lens, and deftly composed into a harmonious arrangement by Kitchen’s thoughtful and skilled pictorial interventions. His careful correlation between eye and hand infuses the routine familiarity of nature photography with a subversive sense of adventure that demands a closer look at each component part.

On view through October 10 at Presa House, San Antonio