Picasso to Hockney: Modern Art on Stage at the McNay 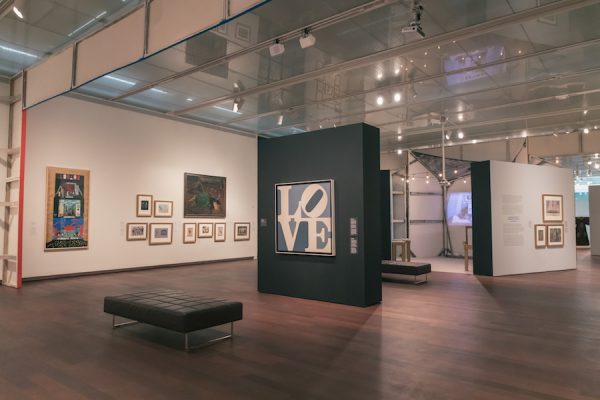 Of all established creative modes, the theater is the one I’ve experienced the least. This isn’t really by choice: theater is often expensive, and many of the cities I’ve lived in haven’t had much of a theater scene. Still, my limited experiences are extremely memorable: an adaptation of Crime and Punishment that was only 90 minutes long but captured the bone-chilling resonance of the novel; a play set in the Bronx directed by the late Phillip Seymour Hoffman that was a furious flurry of profanity and grief (I was only 20 and wondered, with a thrill: “Theater can be like this?“); and a ballet performance of The Rite of Spring that was so transcendent I think I felt myself leave my body and float over the performance hall.

Theater, like cinema, is an amalgam of aesthetics and decisions: set design, costumes, makeup, props, music, choreography, and more. The tactility and presence of all these are more immediate in theater because it is live, right in front of you. Theater, especially in the early part of the 20th century, was the vanguard for collaborations among artists, composers, writers, and choreographers. The dazzling exhibition Picasso to Hockney: Modern Art on Stage at the McNay in San Antonio is a capstone to a bang-up year of museum shows in San Antonio that include Victorian Radicals at SAMA, and the opening of Ruby City. With this exhibition, the McNay’s Theatre Arts Curator, R. Scott Blackshire, has crafted a cohesive dream from the remarkable collection of Robert L. Tobin. 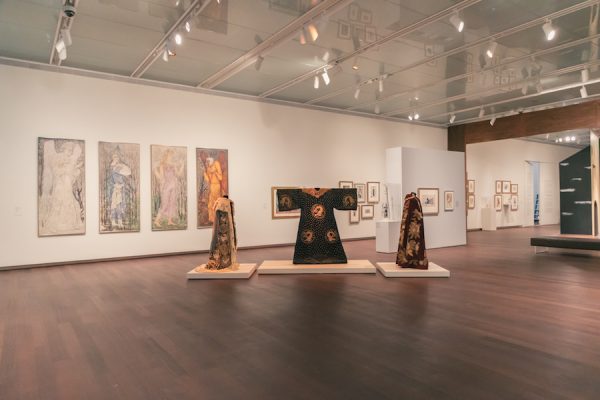 The show has a whimsical and waltzy flow, and it seems as if it’s all part of one fantasia. Near the entrance, several large paintings by Natalia Goncharova depict characters from the Eastern European fable The Snow Queen. The paintings have an incandescent mystery to them, and appear almost as stained glass — a window into a cabin in a fairytale. 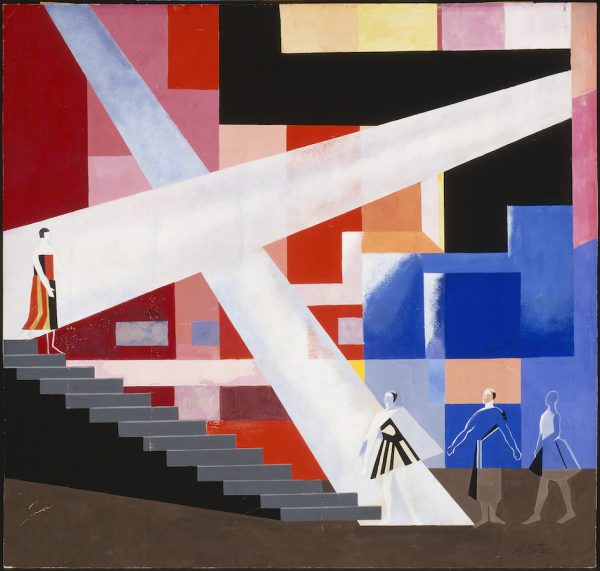 Alexandra Exter, ‘Lighting design for a tragedy,’ 1928. Gouache, graphite, and ink on paper. Collection of the McNay Art Museum, Gift of The Tobin Endowment.

The placement of pre-modernist romanticism casts an early spell on the viewer, and leads us into the Russian Constructivism of Liubov Popova and Alexandra Exter. Exter’s dynamic, futuristic paintings and designs are paired with a projection of the silent film space opera Aelita: Queen of Mars, for which Exter designed the costumes and sets. The stark lines and velocity of Constructivism is particularly suited to stage design. One of the revelations of this exhibit is how various visual artistic movements throughout the 20th century are physically manifested and demonstrated through theater and performance. 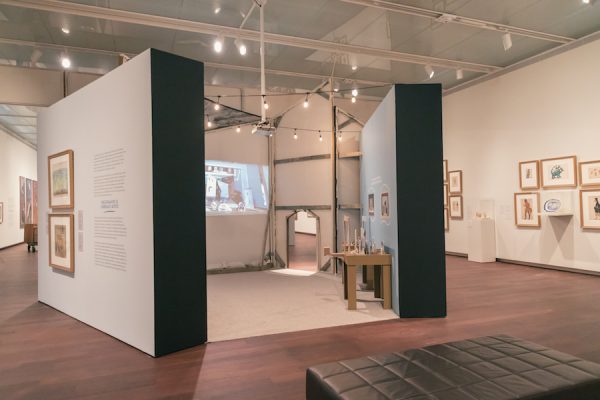 This dynamic is literally realized in a charming and ambitious gambit where a Picasso painting of a proposed stage design is created as an actual stage design by the crew at the McNay, allowing viewers to enter the set. This kind of tactility runs throughout the exhibit; scaffolding is left exposed, and the entire exhibit becomes — to put it simply — a stage design of stage designs.

The highlight of the show is a series of works by David Hockney for productions of Stravinsky ballets in the early 1980s. Hockney is, of course, most famous for his iconic depictions of Californian ennui — works that luxuriate in an existential and gorgeous loneliness. His works in this exhibit are, conversely, ecstatic, occupying a supple zone between Pop and the sensual freedom of Picasso. (Both Hockney and Picasso designed productions of Erik Satie’s Parade). 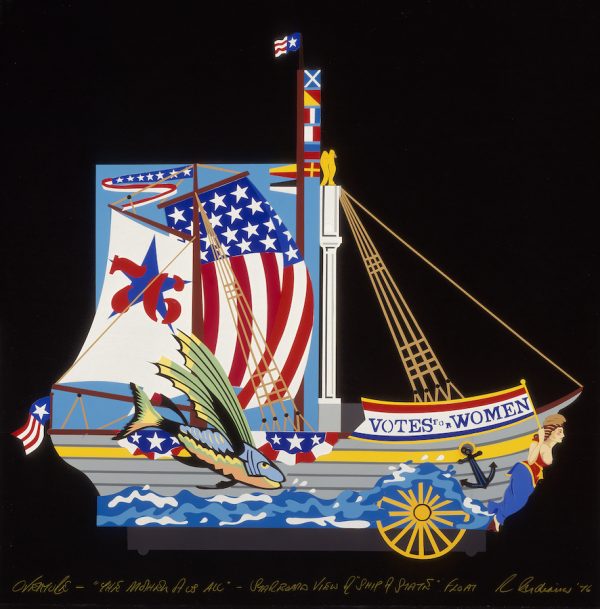 Then the show takes a jarring but not unwelcome shift, with works by American Pop artist Robert Indiana for a musical about American history. Most of the rest of the works in the show occupy a European reverie, but Indiana’s pieces play with the shellacked myth of America. 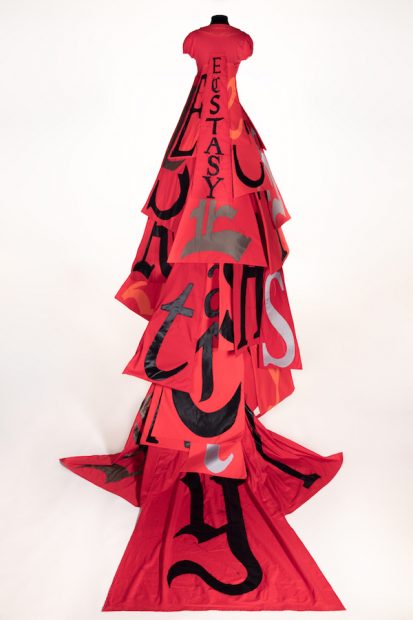 Behind Indiana’s pieces, Lesley Dill’s costume designs for an opera in which she performed (a performance is projected in the exhibit) are darkly romantic and symbolic — they are cascading dresses of jagged lettering and words such as ‘ECSTASY.’ It’s a long way from the characters of The Snow Queen, but also no distance at all. The works throughout all whirl on the plane of living myth, and they rest in a state between an aesthetic cutting edge and an emotional familiarity: We all don a new cloak for the same parade. 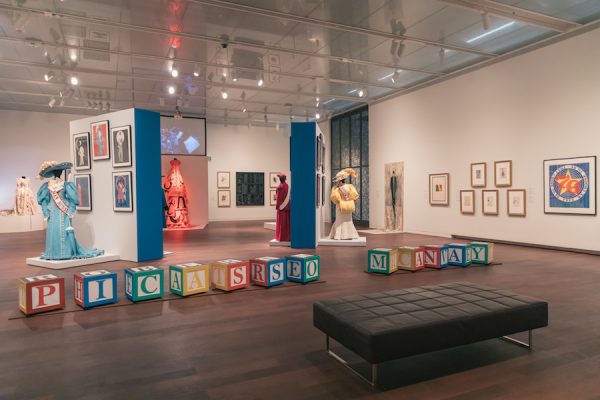 Another highlight of Picasso to Hockney, and acting as a kind of coda, is a series of stage sketches by Jean Cocteau. Cocteau is the patron saint of the exhibit. Born a rich aristocrat whose sense of romance was shattered by two world wars, his final act of directing Beauty and the Beast and Orpheus in the 1950s is among the purest expressions of the sublime that I know of. His elegant, fragile sketches for stage designs radiate with the flickering hope of creating a new world — a portal to the beyond, the magical frisson of looking into a mirror and then stepping through it.